Hall of Fame Predictions: The Contributors 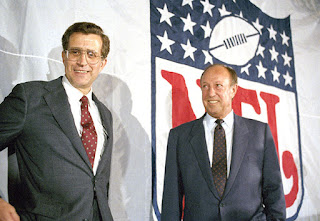 The Hype:  Paul Tagliabue was the NFL Commissioner from 1989 though most of 2006. He was awarded the NFL Alumni Order of the Leather Helmet and a Walter Camp Distinguished American Award winner and is a member of Italian American Sports Hall of Fame.

The Knock: It's really a matter of comparison. If you will indulge us a baseball analogy:  Yankee outfielders. If Pete Rozelle was Joe DiMaggio then is Tagliabue Micky Mantle? Making Goodell Bobby Murcer. That would be one thing.

But if Bert Bell is the DiMaggio and perhaps Joe Carr is the Ruthian figure, making Rozelle Mantle, leaving Tagliabue as Murcer then that would be another thing (making Goodell Elliott Maddox?).

In those cases, most would agree Murcer, though a very fine player, is not a Hall of Famer. So, it will be up to the presenter to make a case that Tagliabue is really a "Mantle" figure.

The Prediction:  This one is tough. It will be an interesting debate in the selection committee room with the pros and cons being presented. We think that Tagliabue will get the 80% votes needed. However, it will be likely because a good case is made and also, voters realizing that if he does not get in this year, his name will come up again and again.

The practical side of the matter is that there are good contributors waiting, like a George Young or Bobby Beathard and others that if Tagliabue or Jones, for that matter, do not get in, there is enough support in the contributor committee that they will likely come back over and over, like a version of the 1990s Lynn Swann debates. So, if there is any doubt the benefit will possibly go WITH election rather than not. 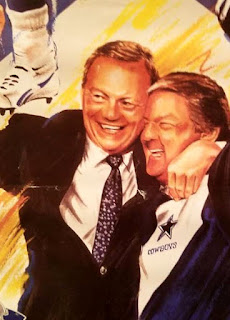 The Hype: Much of the same as with other owners, Jerry Jones was a key player in the NFL ownership ranks since entering the NFL in 1989. His teams had great success, early, but have not reached those pinnacles as of late. However, on the TV committee and other committees he's been a mover and a shaker.

The Knock:  Some may feel it's too early for him and that he may have leaped-frogged Pat Bowlen, for example. Another knock may be that his team's on-field success is largely linked to Jimmy Johnson. There are some others.

The Prediction:  Again, as with Tagliabue, voting Jones down will just cause him to come up again someday and therefore clog the system. Remember, readers, this is our analysis, not our deep felt views on the matter, they are not always the same. These can be weight matter for the HOF committee and why we respect their role, it is not a simple "Is he a Hall of Famer or Not" is a nice phrase, but in a zero-sum game (only a maximum of 8 people inducted per year) there are many matters that have to be considered when you have more than 8, and as many as 18 qualified people it makes many of the votes difficult. More than numbers matter. More than All-Pros. More than a "player personel evaluation" matters. All those things, and more need be considered. It's a tough process for the players and voters.

In some ways the HOF process is like making sausage (not unlike the lawmaking process in Congress) and thus our guess is that Jones will be voted in and then in the next few years Bowlen, Young, Beathard and others will get their turn.
Posted by John Turney at 12:27 PM