Hall of Fame Predictions: The Receivers 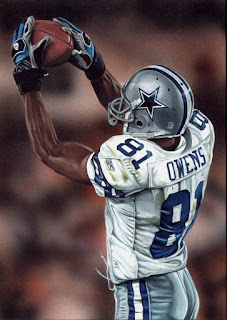 The Knock:  The knocks are still the same, dropped quite a few passes for an elite receiver, accused of being a poor teammate, a "me-first" guy.

The Prediction:  The knocks will keep T.O. out of the Hall of Fame for a couple more years, while players who are more of a "complete package" like Tomlinson pass him, but he will get in. Lots of great receivers had to wait, we think because they didn't have it all, like the first-ballot careers of a Don Hutson, Lance Alworth, or Jerry Rice. But they all get in eventually.

We also predict the "numbers" crowd will spout off and rip the Hall of Fame selection committee but will omit the fact that Owens didn't get much support for NFL Offensive Player of the Year, etc. Marvin Harrison got more votes for those awards, as did Randy Moss. None, however, were close to Jerry Rice. And that is the difference in first-ballot receivers and the others. Rice and Hutson had it all, the others, while great, we behind in what we term "the extra". 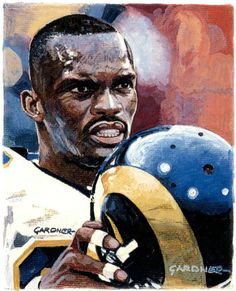 The Hype: Isaac Bruce was a pro's pro. He was one of the top route-runners ever, according to many accounts. He had good hands, got open, and could get deep, he was a complete receiver. He was All-Pro in 1999 and went to 4 Pro Bowls, and should have gone in 1995 as well. he was part of a massive passing game under Mike Martz and was a hero of the Rams only Super Bowl win and ended his career with over 15,000 receiving yards.

The Knock:  Here, the "honors" are the knock. He was All-Pro only once, and led the league in yardage just once. He didn't leave a monster trail of numbers and honors like, for example, Owens or Randy Moss.  He had to share catches with Torry Holt, since the Rams didn't really have a #1 WR and a #2, they had two #1s.  He didn't total 100 career TDs, though some other HOF WRs didn't either.

The Prediction:  It won't be Ike's year, we don't think he'll advance to the Final 10, though we could be wrong there. He's one of the players the presenter will have to make the case for in the following way:  He Was Better Than The Numbers Might Indicate. And because of that induction to the HOF will have to wait.