The "Flex" Position is a Fail 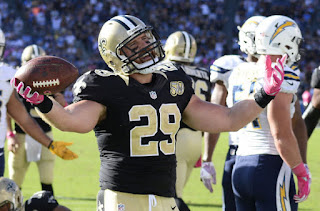 Well, all the complaining and criticism about the AP All-Pro team format being outdated for having a fullback and two running backs was brought about a change in the construct of the team.

So, rather than two running backs and a fullback, we now have two running backs and no fullback and no third wide receiver. The new format was supposed to reflect how the game is played today because fewer teams have the pure fullback anymore and those who do, don’t use him very much.
Also, the criticism of the old format was that no teams use two runners in same backfield anymore so the old format of two runners was obsolete; since the early 1980s when there were two running backs, one a fullback and one a halfback and they usually lined up in spilt back formations (red or brown, for the most part).

Here is the voting for the new position:

Maybe next year will be different, but the solution was not to eliminate the fullback position. It was to realize that there a 12, 13 or even 14 starters on offenses, that the personnel groupings are 21, 12, and 11 and that would mean a fullback/h-back AND a third wide receiver would be appropriate for the All-Pro team.

The "flex"solution reduced the squad from 12 to 11. It is totally fine to eliminate one of the running back positions, but the flex solution eliminated two, one of the runners and the blocker. When teams want to run the ball, you can bet that John Kuhn, Anthony Sherman, Mike Tolbert, and Kyle Juszczyk, et al still matter. Yes, they are specialists, but that has been so since the position was added in 1996. The position was created to reward the players like Moose Johnson who helped make Emmitt Smith's records possible.

There was a fair point about it being, perhaps, superfluous, and needed to be replaced. But the argument was to replace it with a third receiver to better reflect the passing game. But when we read that running backs were eligible for the "flex" position we knew there was going to be an issue.