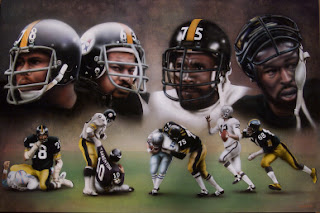 Before the story for today an update:  For the 47th consecutive year there was at least one road victory in the playoffs and with the Packers & Steelers winning yesterday that streak continues.
Since I mentioned the Steelers they are the beginning the saga of dominant defense.

Previous to Pittsburgh becoming a power in 1972 there were many, many teams that played championship defense, yet as PFJ's impressive chart from his story on January 4th points out rarely did a team lead in all categories across the board.
Click to enlarge: 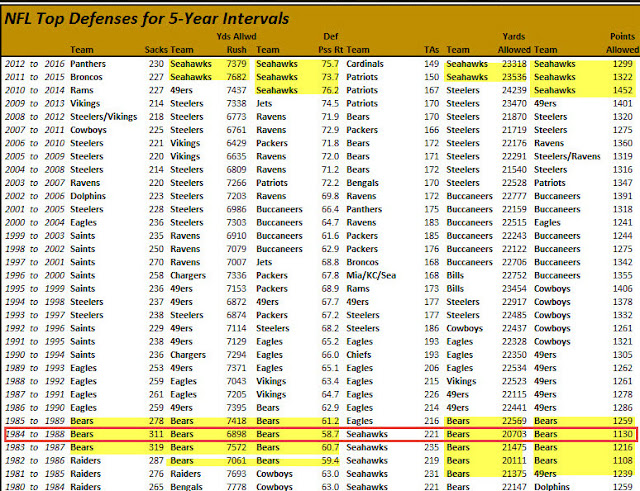 Chuck Noll had a strong defensive background before becoming the Steelers head coach in 1969 and the building blocks were added with each season; starting of course with Charles Edward Greene. There have been many teams with talent, and effective coaching. What separated the Steelers from all the other outstanding defenses was the lethal combination of talent and scheme. 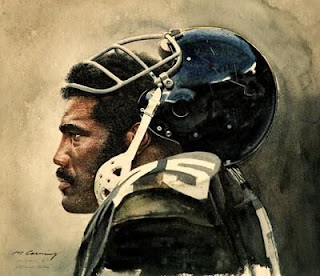 oll learned under Shula in Baltimore that a double zone coverage was not only possible, but viable. Having only two men in coverage deep was a work in progress, and the Steelers did not align in what is known as Cover-2 on every down.

Why did this coverage work? The first element was the pass rush from a front four that did not need a blitzes to be effective. Did the Steelers blitz? Of course, yet was even more effective since they seldom did it. Teaching to the weakness of the coverage is an element that all successful coaches subscribe to. The MIDDLE of the field is open! 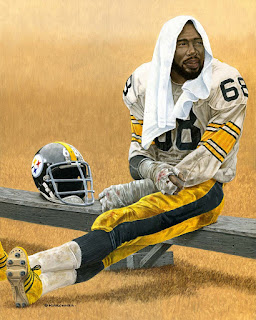 Can the offense get a receiver to that area, and will he have time to deliver the ball? Greene supplied relentless pressure up the middle, with Dwight White and L.C. Greenwood coming hard from the outside.

Jack Ham, though, was the key to success. A strong side linebacker that could "shiver" the tight end upon his attempted release, and at times actually cover the tight end man to man all over the field. Ham was simply the best-ever linebacker in pass coverage. He also could rotate in zone, and of course take the back out of the backfield in whatever coverage defensive coordinator Bud Carson and Noll asked of him. 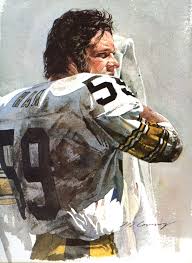 Film study of Ham in 1972 is eye-popping as he ranked among the NFL leaders in interceptions. The road playoff victory over one of the best Raider teams of all-time in '194 again demonstrates Ham's contribution.

Andy Russell contributed on the weak side, and Henry Davis was adequate in coverage. When the lean, lanky "Dracula in cleats" joined Pittsburgh in 1974 the underneath pass coverage took on a new element. With Lamberrt, a middle linebacker with speed, height, and discipline he made throwing over the middle a new challenge due to the trajectory of the pass. 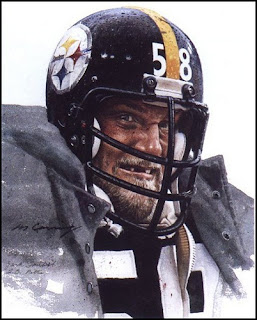 Mel Blount continued to improve, and he responded to his benching in 1974 against Oakland with a shut-down season in '75. Rowser needed to be replaced at left corner and JT Thomas was a smaller version of Blount, but learned his lessons quickly. 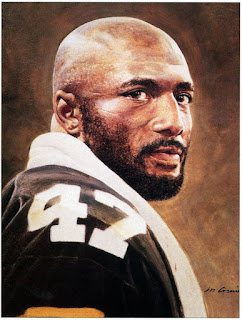 The Steelers team MVP in 1974 was "Knotty Pine" Glen Edwards as he had finally won the job at right safety on a full-time basis(shared position with Ralph Anderson earlier), and Mike Wagner was a tough tackling very disciplined savvy ball hawk at left safety.

When a team wins as often as Pittsburgh did from 1972-76 there must be a reason, or reasons. Black & Gold became a perfect storm. From lynch pin Greene in his cocked stance in the 4-3 to linebackers who could run and tackle, to a secondary that understood the concepts given they were truly a curtain . . .in fact sometimes a "Steel Curtain" in defending the talented offenses that came a calling. They remain the bench mark to be measured by.

The Los Angeles Rams under the impressive coaching of Chuck Knox and defesnsive coordnator Ray Malavasi did lead in one category during this time frame. As strong as the Ram defense was during this time period, they still cannot measure up to Pittsburgh.

What about Dallas? Washington? Miami? Minnesota? yes, all of them were truly excellent on defense, but just not the pinnacle. The Chicago Bear defensive players impassioned plea to the papa bear to retain James "Buddy" Ryan was the combustible mixture of Ryan and Mike Ditka in Chicago. Rather than discuss personalities, let us deal with the talent and concept on the field from 1984 to 88.

Ryan's background with the Jets and Vikings convinced him that defenses must not only adapt and adjust during a game that they must control the tempo if at all possible. While that is a sound bite everyone would listen to the question is 'Ccan you do it'? Alan Page was in the final stages of his career, yet he could still shoot a gap and must be accounted for. Young improving Dan Hampton was a match-up nighmare  when aligned on the center. 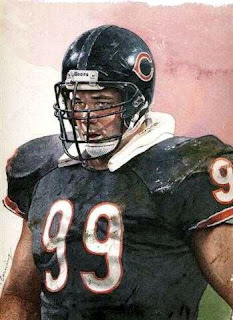 The key though was Page's replacement in "Mongo" Steve McMichael the most under appreciated defensive tackle of his era, and Richard Dent's value as the starting right defensive end gave Ryan the front four he needed and savored.

The Bear linebacking corps from 1978-82 was adequate, yet not near as athletic and fast as Buddy wanted. Otis Wilson slowly developed, and first Al Harris, then dominant Wilber Marshall manned the right side when aligned there. Oh? you don't have to have both outside linebackers on opposite sides? Marshall & Wilson aligned on the tight end side, with many, MANY possible combinations of assignments.

Mike Singletary learned his lessons well and became the best middle linebacker in the league during this time frame. The linebackers did have coverage responsibilities, since the Bears did not blitz every down, but the linebacking corps was so much better in attack mode. The secondary has never gotten the respect they deserved, and though they were not the best in the league (Seattle was) they were top notch and did their jobs under immense pressure of man coverage with virtually little help from the safeties.

No help from the safeties? Why? Doug Plank wore jersey #46 thus the catchy nickname of the defense. Basically an 8-man front aligned so different from defenses of the past. over shifted to the tight end side, with a safety in the "C" gap weak-side. The middle linebacker protected with the center and both guards "covered". 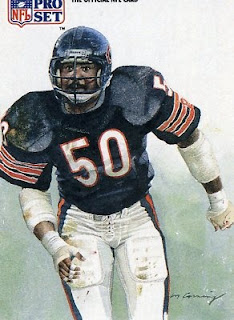 No center in the league could consistently block Dan Hampton, thus Samurai Mike could roam side line to side line. Ryan dialed up a myriad of alignments and blitzes, many which had not been seen before established the tempo. Could a quarterback read the coverages (usually some form of man or combination zone and man)? YES! Does the QB have time to throw? That became key.

Finally in the middle of the field is the premier combination of brains and tackling ability. Gary Fencik would be considered an over achiever, yet he did earn a pro bowl berth at strong safety, and now aligned in the middle of the field he adjusted to what the opponent pass offense was doing. Pressure from the outside, the best middle linebacker with a future hall of fame nose guard in Hampton in front of him, and behind him one of the smartest safeties in league history who just did not miss tackles.

A navy blue & burnt orange perfect storm on the carpet in the city of big shoulders. Ryan left after '85 yet the next three seasons under Vince Tobin the Bears still played outstanding defense. No, not nearly as much in the 46 alignment, usually a traditional 4-3. Talent is talent, and except for Fencik and Todd Bell (replaced by valuable Dave Duerson) leaving the line-up.  The many corners who played were all adequate with the exception of Les Frazier, as he was excellent. 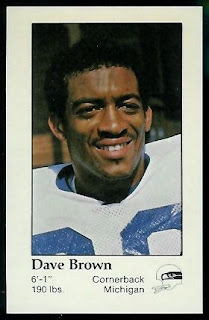 Since today is Dave Brown's birthday (he left us way too soon). He ties this package together. He was a special teams dynamo with the champion Steelers in 1975. He joined the fledgling Seahawks in 1976 and remained a key figure in the teams rise to a playoff team in 1983. Brown was a smooth moving, physical corner strong in man coverage, yet stellar in zone, he was joined by ballhawk John Harris and the best strong safety of his era the vicious Kenny Easley at strong safety. A defensive passer rating of 58.7 for a 5 year period in the mid-1980's? Not only unheard of, but amazing. Seattle has sure had their moments during the past 5 years, yet they pale to the Steelers of 1972-76 and the Bears of 1984-88.
Posted by TJ Troup at 6:30 PM