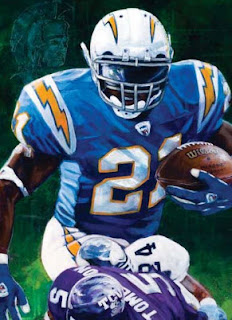 The Hype:  LaDainian Tomlinson was a consensus 2006 NFL  MVP, the 2006 NFL Walter Payton Man of the Year and on the Pro Football Hall of Fame First-team All-2000s Team. he was also a four-time First-team All-Pro and was a Second-team All-Pro twice more. he was voted to five Pro Bowls. he led the NFL in rushing twice and in rushing touchdowns three times.  Additionally he's considered one of the best, if not the best, receiving back of his era.

The Knock:  Again, no real knocks, other than lack of a Super Bowl ring, but that has not hindered candidates these days like it did in the 1980s and 1990s when such players were held out (just name any Minnesota Viking).

The Prediction:  We think Tomlinson will be a First-ballot Hall of Famer. 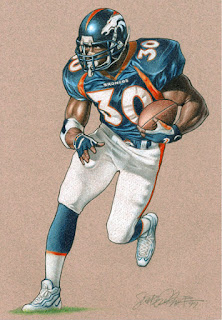 The Hype:  Terrell Davis has almost all the Tomlinson has, an MVP, plus a rushing title, two rushing TD titles, was a 2-time Offensive Player of the Year, plus a Super Bowl MVP and two Super Bowl Rings. He was a 3-time All-Pro and a 3-time Pro Bowler.

The Knock:  What he lacks in longevity. He suffered the severe knee injury and never really recovered.

The Prediction:  This one is tough. But, we are going out on a limb. Davis made the Final 10 last year and we think he will move up to the Final 5 and be elected. With Ken Easley in the mix, voters can see that Davis had plenty of "extras", that is to say, he wasn't just All-Pro, he was a Player of the Year and MVP and a Super Bowl MVP. We think the "Gale Sayers exception" will apply and that is the fact a player does not have longevity can be ignored if that player was truly great and the longevity was cut short due to a career-ending injury. So, we predict this year for Davis.
Posted by John Turney at 11:03 AM