What It Means: Rams Hire Wade Phillips to be Defensive Coordinator

LOOKING AHEAD
By John Turney
The Rams officially hired Wade Phillips to run their defense. Among some Rams fans there are questions of what he will do to a defense that was drafted and coached to be a 4-3 defense and Phillips has used a 3-4 defense most of his career, the only exception was when he ran the Eagles defense under Buddy Ryan in the late-1980s when he ran Ryan's 4-3 defense with its 46 iteration.

The last time the Rams moved from a 4-3 scheme to a 3-4 scheme was in 1983 when then-defensive coordinator Fritz Shurmur installed a two-gap 3-4 defense. The decision was made by new head coach John Robinson to go with the 3-4 because he and Shurmur felt that there were more good young linebackers than good young defensive linemen on the squad. So, they shipped of 4-3 defensive tackles Mike Fanning and Cody Jones and traded for Gary Jeter a 3-4 defensive end.

The transition worked well in stopping the run as the Rams allowed an average of 3.61 yards a carry from 1983-86, the first four years in the system, and best in the NFL in that span. However, they were 14th in the NFL in sacking the quarterback in that same time frame.

THAT WAS THEN
Shurmur's alignments were listed in consecutive numbers, most commonly used in college, but some teams adopt this. It means the nose is a 0-technique and the defensive ends (called tackles in Shurmur's scheme) are head up in a 5-techmique. 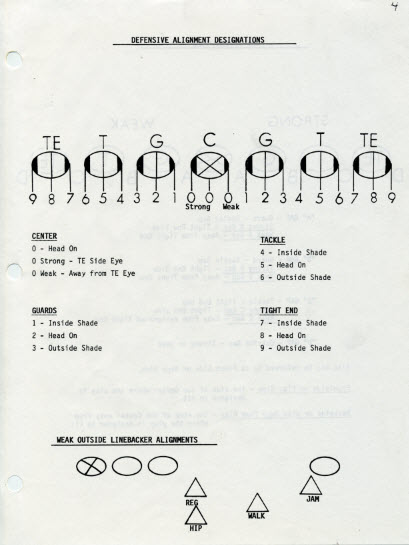 The most-used base call was "Ram". There would be times that some pressure would be taken off the defensive linemen, who had to two-gap in Ram by calling a slant, so the call may be Ram-slant-3, meaning cover-3. Usually, though the tackles (Jack Youngblood and Reggie Doss) and the nose (usally Greg Meisner or Charles DeJurnett) had to read-and-react. Youngblood and Doss were required to knock the tackle back and if the flow was to them they took the outside gap and if the play was away they had the inside gap. 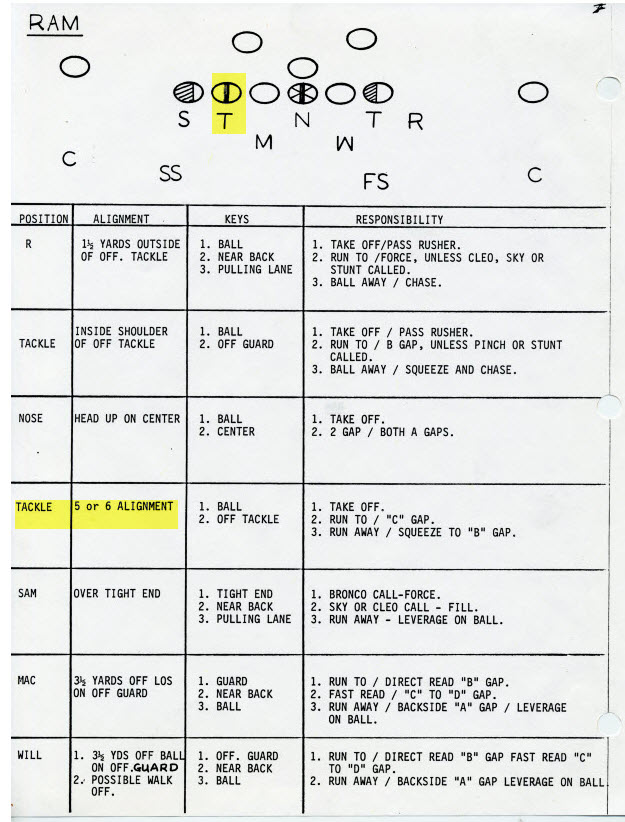 The Rams also ran "Under" front quite a lot. They had other fronts we won't show like "Even", "Flop", and "Ram Flop" and "Eagle". But they just were not employed as much as Under and Ram. Here is a look at the Under. 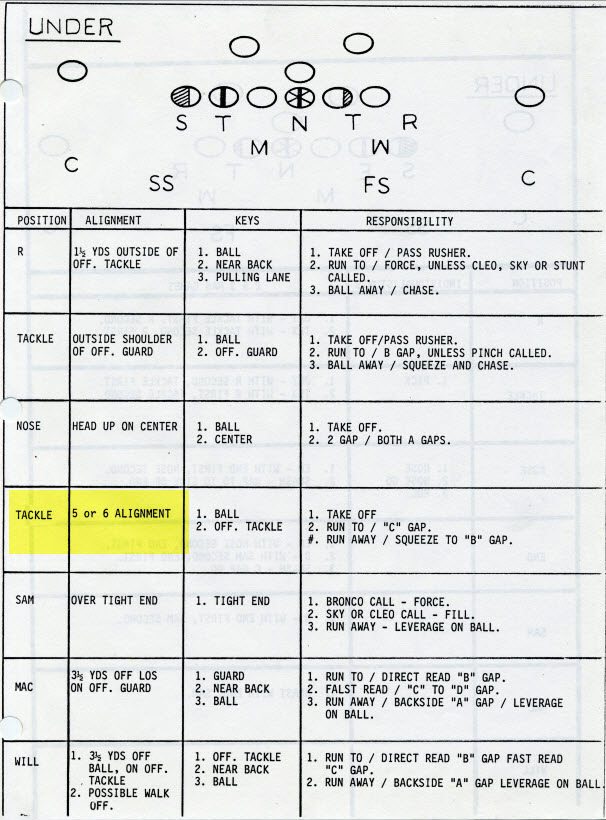 These are a few of the techniques for the tackles, the 5 and 6 techniques. An experienced player, like Youngblood, was given some leeway to align in  6-technique but he was still required to knock the offensive tackle back and read the play, though Youngblood will tell you Shurmur and defensive line coach Marv Goux preferred the head-up 5-technique for the tackles. 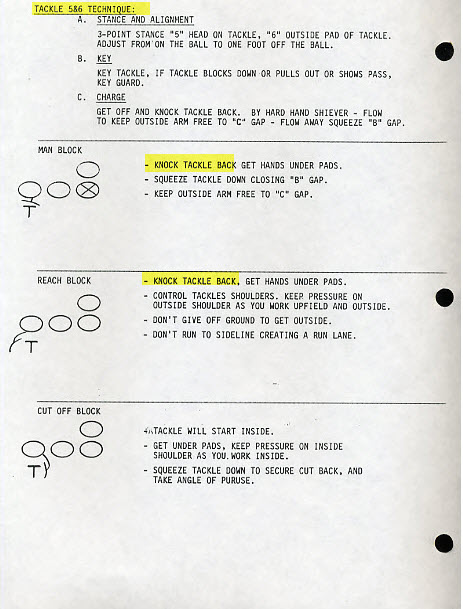 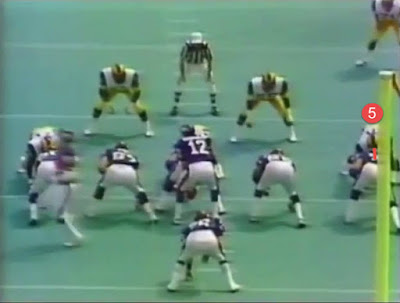 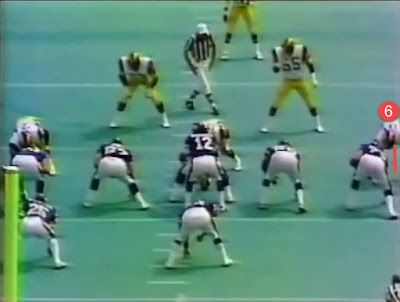 THIS IS NOW
Wade Phillips's defense is not like that, at least not anymore, Phillips insists that he adjusts his defense based on the skills of his players. With Aaron Donald, he will still play 3-technique, the same as he did in Gregg Williams's 4-3. He won't be required to two-gap, for example. He'll just have one gap to control. 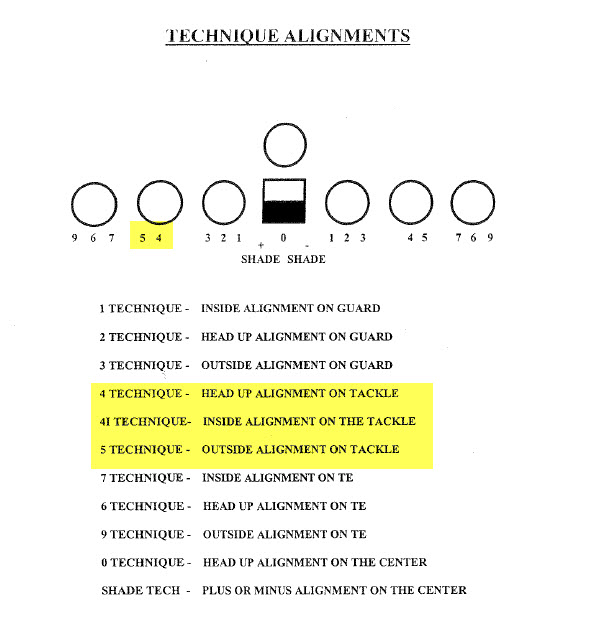 This is the base defense in the Phillips system that he stated in the above video he doesn't use anymore. As you can see it's similar to the Shurmur "Ram" defense. The ends (called tackles in Shurmur's system) are head-up as is the nose.  Neither of the inside linebackers (Mike and Mo) are covered up, meaning the do, in this alignment, have to take on a guard if need be and flow to the ball. 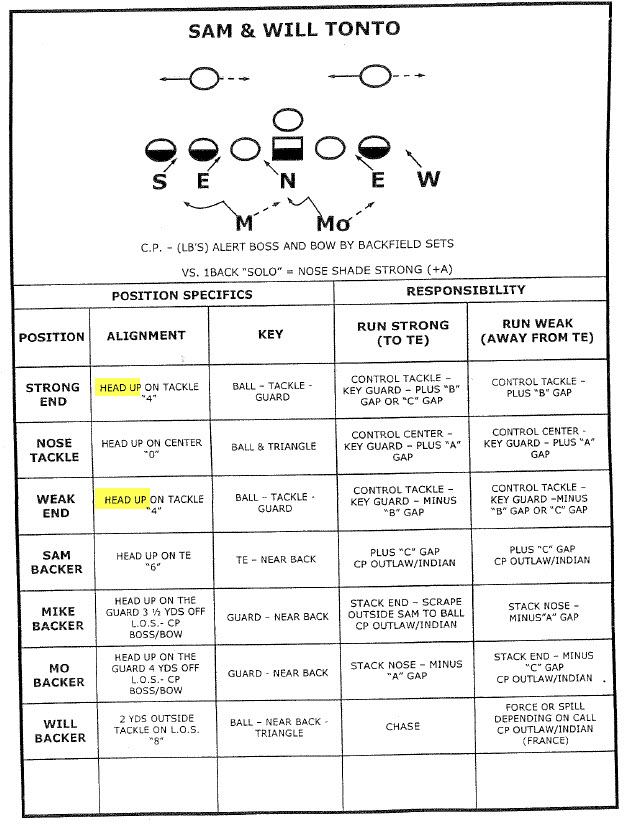 This is what will be used in Los Angeles. The end here is a 3-technique and has one gap to control. The nose is in a shade alignment and the weak end or open end in a 5-technique, all one-gap assignments since this is a 3-4 one-gap system when aligned this way. It is no different that a 4-3 over-shifted defense. 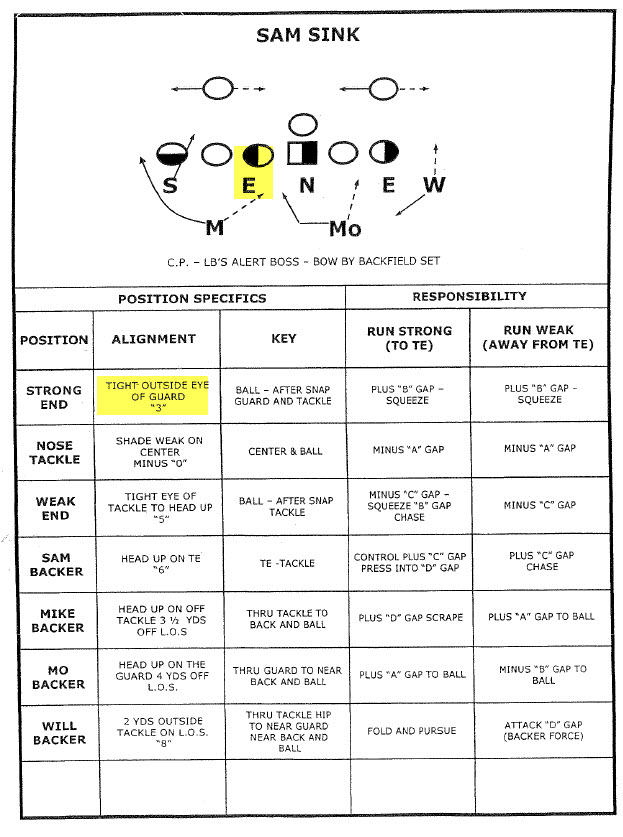 This is essentially the mirror of Sam Sink. Again, there is a shade, a 3-tech and a 5-tech, same as a 4-3. One of the OLBers (Sam or Will) acts as a defensive end for all intents and purposes. Again, it is no different than a 4-3 under-shifted defense with the exception of who may or may not have their hand in the dirt in 3-point stance. 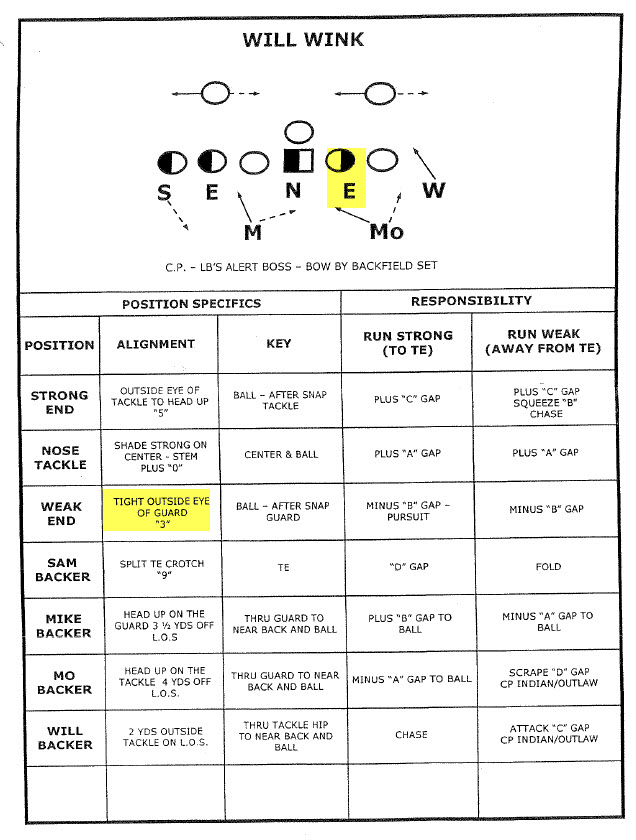 What Phillips can and will likely do is switch Aaron Donald from side to side depending if it's a Sink or Wink and always play the 3-technque. Michael Brockers can stay as a shade technique, which he has been playing since 2014. Robert Quinn does not have to stand up, he can play with his hand in the dirt and play the Will position. Alec Ogletree will remain the Mike and Mark Barron can play the Mo backer, which Phillips says is in the above video more of the "coverage linebacker". The 5-technqiue can be handled by Ethan Westbrooks or William Hayes and even Brockers at times if they choose to put Cam Thomas as a shade to spell Brockers.

What Ram fans may be concerned with is who will play the Sam backer spot. In Denver it's Von Miller. The Raiders, who run a similar scheme, use Khalil Mack. The Rams don't have that kind of player on the roster. They will likely draft someone to play that position and/or sign a Chandler Jones or a Nick Perry or a Melvin Ingram, all of whom were double-digit sackers and all UFAs this off-season.

In an era where almost all offensive and defensive schemes are hybrids, borrowing from other schemes and melded together the 3-4 one gap won't hurt what the Rams vaunted defensive line can do. There may be questions here and there as to whether Quinn, when called upon, can cover, which he will have to do a little bit to mix up games and stunts and blitzes that are needed in trying to confuse NFL offenses, but by and large the only questions would be how they list the players. That is if Donald will remain a "tackle" on paper or called an end, which the playbooks calls for. And if Quinn will be listed as an end or a linebacker.
Posted by John Turney at 11:57 AM