Rumor: If Sean McVay to Rams Wade Phillips Will Follow

Today there are rumors that if Rams hire Sean McVay as their head coach that he would like to bring Wade Phillips to the Rams as his defensive coordinator.

Of course, it's speculation, but this is part of the NFL these days at this time of year. Well, in playing along it begs the question of how Phillips will incorporate his 3-4 one-gap defensive scheme to the personnel of the Rams, which was drafted and whose skill sets are to play a 4-3 defense, especially elite 3-technique Aaron Donald.

Well, there is a way to do it. In Tennessee, the Titans run a one-gap 3-4 defense that features Jurrell Casey as a 3-tech even in likely run downs versus base personnel. 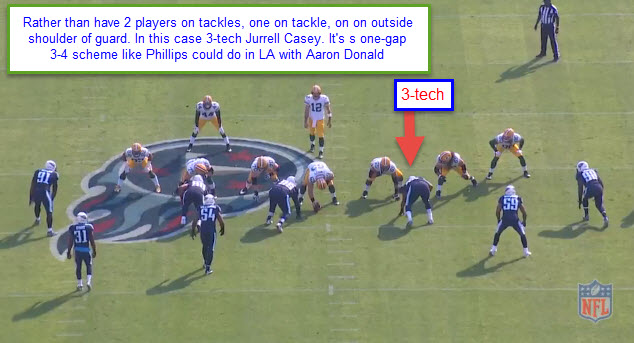 As you can see the left defensive end is head-up on the right tackle. The right side it has Casey, on the outside shoulder of the guard, a 3-technique, his natural position.  The Titans have their shade or nose technique cocked, not something we've seen Phillips do, but the Rams have Michael Brockers who is a fine shade technique and wouldn't be asked to do things much differently. Robert Quinn would (if this hypothetical were to occur and Phillips stayed with his traditional preferred defense) be asked to stand up like Brian Orapko, who is here the right outside linebacker.

Here, the left outside linebacker is converted defensive end Derrick Morgan. We don't see anyone on Rams roster to fill that role. Chris Long could have done it, but he's doing that kind of thing for the Patriots right now and doing a good job at it.  Alec Ogletree would fit as one of the inside linebackers but it would be a question as to whether Mark Barron, a converted safety now playing linebacker, could fit in this scheme as an inside linebacker.

Phillip's defensive playbook has these same provisions shown in the still above. His base calls are "Sam" and "Will" for a 3-4 defense which keys for the players but he has a "Sam Sink" and "Will Sink" which calls for one of the 3-4 ends to reduce or "sink" to 3-technique. And it wouldn't be an issue to always have one of the "ends" flop sides and always be the "sink" or 3-tech. 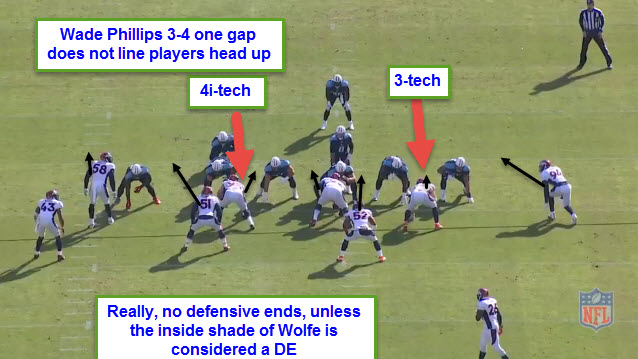 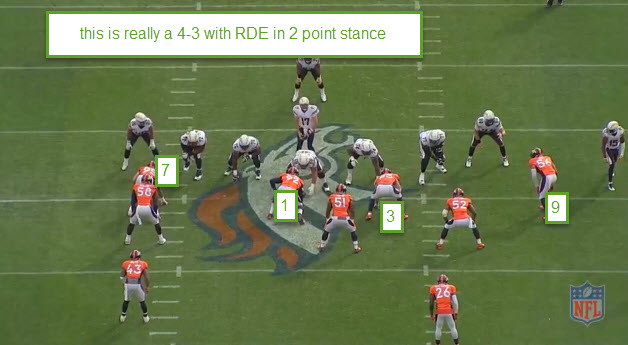 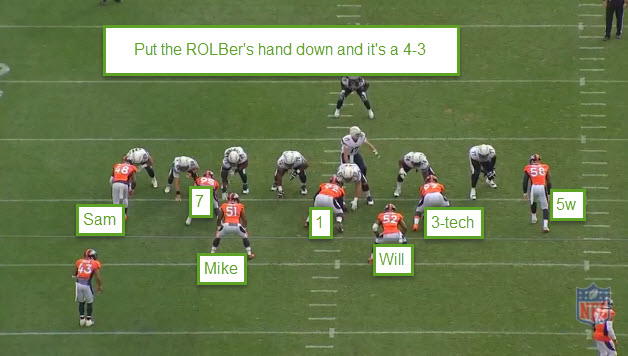 Regardless, we have no idea if this will occur and we also think that Phillips could adapt to a 4-3 if needed. One gap is one gap, in a sense and if Orapko had his hand down in this shot it would be a 4-3, really. With so much hybridization these days the only real question is how many guys a defensive coordinator wants to have two gaps, one? Or all three down linemen.

Additionally, we can speculate that if he's hired, in his first press conference, Phillips would say something like, "Aaron Donald and Robert Quinn are elite players and we are going to do whatever he need to do to put them in a position to make plays and do what they do best".

However, in the case of the Titans and Casey, they went to this current scheme in 2014.  And as can be seen, a fair question might be is this, "Is Casey making all the plays he could, given his skill set?" What happens if Donald's sacks and stuffs drop to the level of Casey's? If the team is winning in three years, no one would complain, but still, Donald has rare abilities, and 3-techniques usually disrupt more plays in a 4-3 defense, it's a defense that is designed to put the 3-tech in a position to make plays behind the line of scrimmage in the run game and the pass game. But in Donald's case there won't be much (if any) change. He will be dominant regardless. He's that good.

Certainly, we  are not experts, but as long-time observers, that's what we've see with Sapp, D'Marco Farr, L'Roi Glover, et al.
Posted by John Turney at 11:15 AM