On October 8, 2017 the NFL lost one of the game’s greatest quarterbacks. Y.A. Tittle passed away at the age of 90.

The “Bald Eagle” was definitely one of the game’s greatest passers.
One unique tidbit about Tittle was that he was the first NFL player featured on the cover of Sports Illustrated. Wearing his 49ers helmet and plastic facemask Tittle was on the November 22, 1954 cover. The historic photo was taken by Fred Lyon.
Over the past five decades, a few books and magazines have been published about Tittle, including his autobiography.

Y.A. Tittle: I Pass!
My Story as told to Don Smith 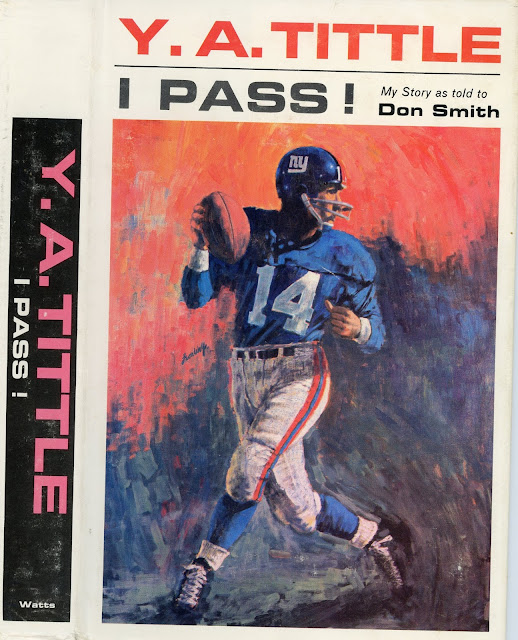 Y.A. Tittle: I Pass! MY Story as told to Don Smith was published in 1964 (a year before he retired) by Franklin Watts, Inc. The 29- page autobiography was written with Don Smith, a former sports writer who was the New York Giants Public Relations Director. Smith was a logical choice working for the Giants and had just published a book “The Quarterbacks” also published by Franklin Watts.

I Pass! Featured a beautiful dust jacket painting by Leon Wolf.  The book contains 30 chapters of Tittle’s life. He covers his NFL Career with the Baltimore Colts (member of the AAFC), San Francisco 49ers and New York Giants (that includes insight into his trade from the 49ers to the Giants).

Tittle also talks briefly about his growing up in Marshall, Texas, where he feel in love with the game of football- as well as the passing game.

“Putting the ball in the air was the way I learned to play football in Marshall, and it has been my motto ever since.

To me, football is passing. I am a passer before everything. This is what I do best. Give me a chance, and I am going to throw the hell out of the ball.”

At the time of his retirement after the 1964 NFL season Mr. Tittle held every major passing record including most touchdown passes with 212.
Giants and Heroes: A Daughter’s Memories of Y.A. Tittle 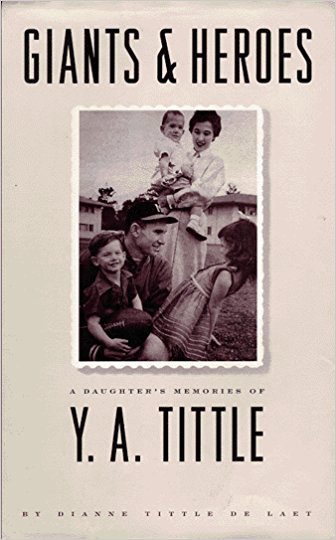 Giants and Heroes was written by Tittle’s daughter Dianne Tittle De Laet. It was published in 1995 by Steerforth Press. A 261-page ode to her famous father Tittle De Laet, a poet and concert harpist, asks the question “What constitutes a hero?” She answers her question by investigating the Greek and Roman classics and writes a very heartfelt memoir that only a daughter could. The book was written so well that NFL Films interviewed Tittle De Laet for a piece on father-daughter relationships that aired in 1996.

Nothing Comes Easy: My Life in Football 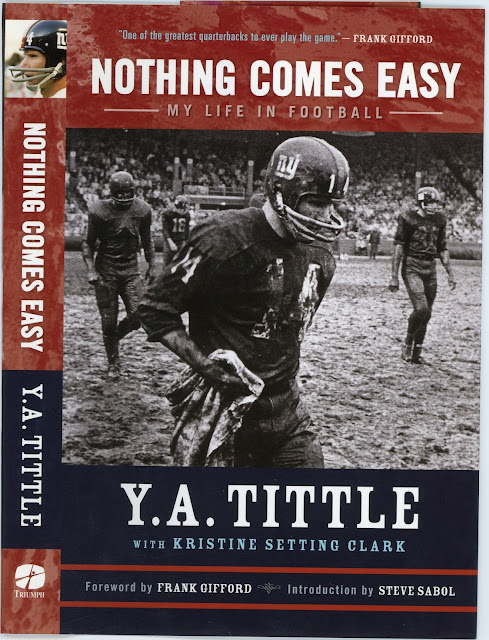 Nothing Comes Easy, written with Kristine Setting Clark, was Tittle’s updated autobiography, some forty plus years after I Pass! This volume published in 2009 by Triumph includes a Forward by Frank Gifford and an Introduction by Steve Sabol.


“Football has been my entire life” said Y.A. Tittle.

Below are a few of the best magazine covers that featured Y.A.
1957 Pro Football All-Stars magazine 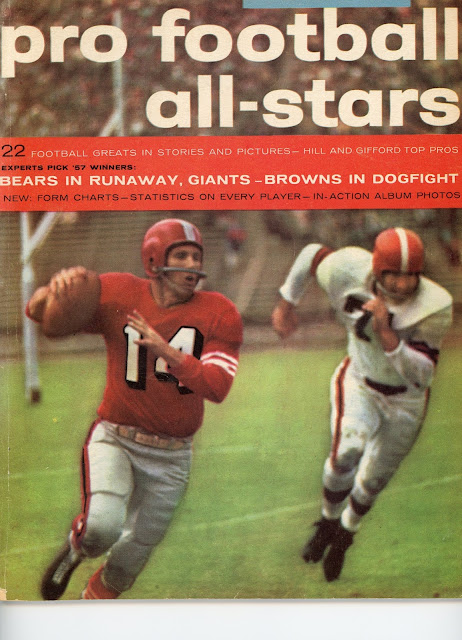 The color photo of Tittle was taken by another legendary sports photographer, this time by Hy Peskin. Pro Football All-Stars was published by Murray Olderman for MACO Magazine Corporation.
1957 Eagle Magazine 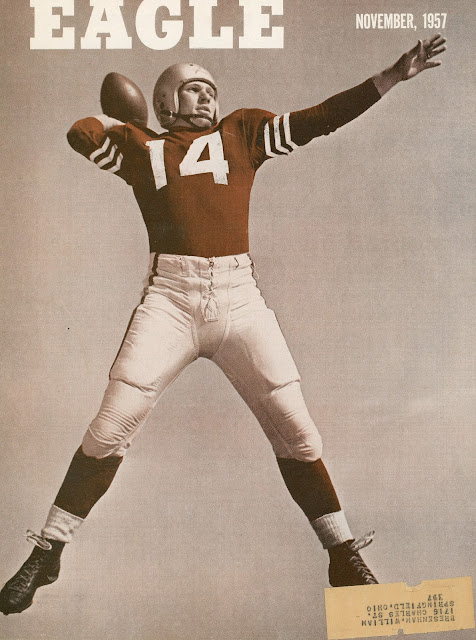 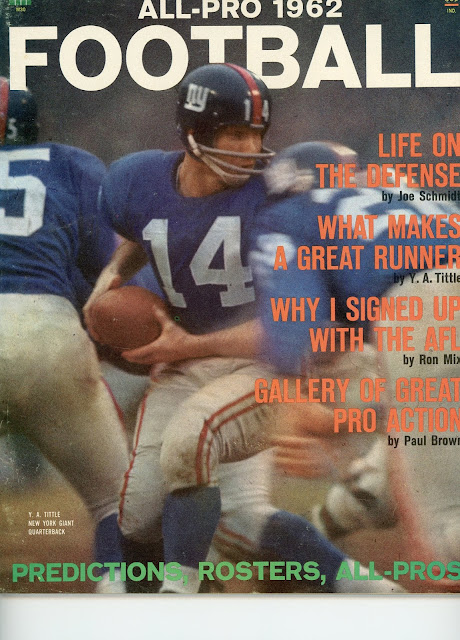 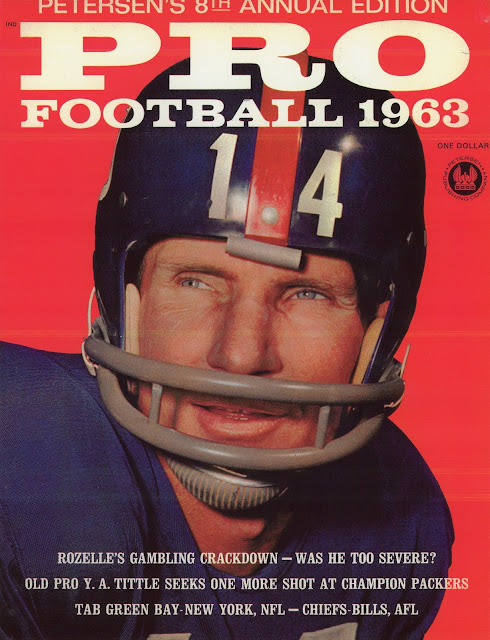 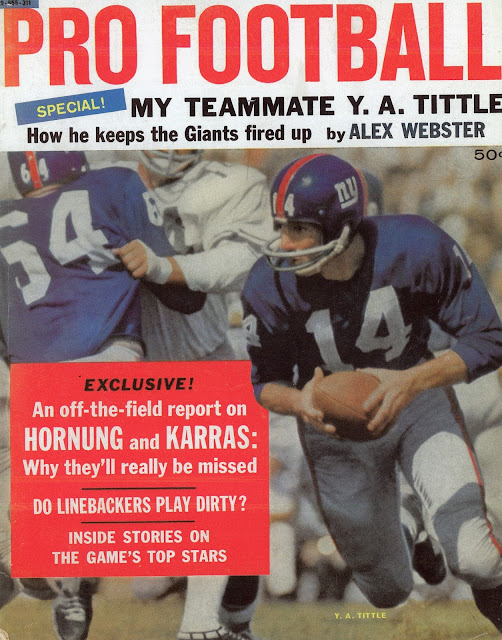 This issue features cover photo by Walter Iooss and an article by Tittle's teammate Alex Webster, as told to sportswriter Dave Anderson. 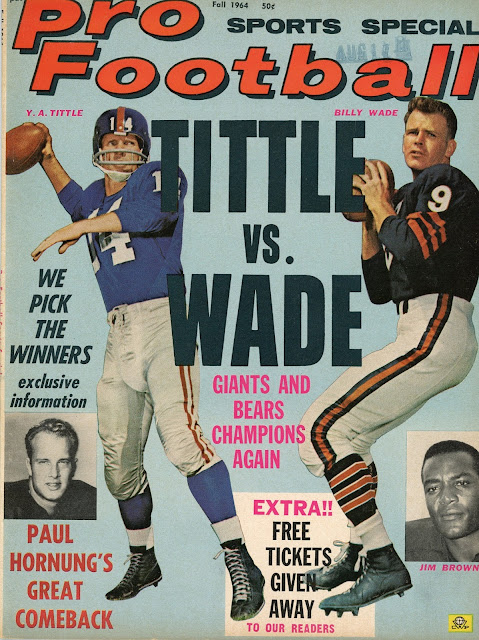 In 1971 Tittle was inducted into the Pro Football Hall of Fame. Despite not winning a championship Tittle was a no-brainer for the Hall. He should be remembered for his leadership and incredible passing skills that lasted for 17 seasons.
Posted by cdw83 at 12:25 PM