This year we are picking All-Time All-Rookie squads for each of the NFL franchises. Today the Bengals get our treatment: 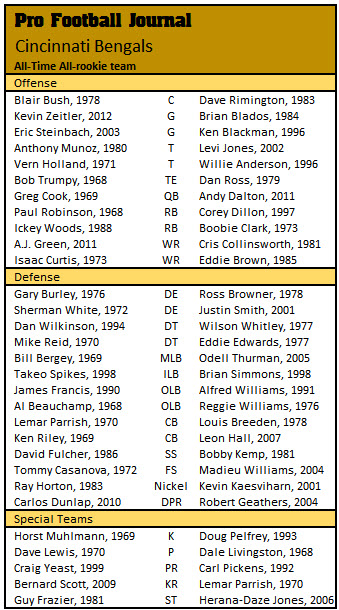 The First- and Second-team lines are solid, most making All-Rookie teams of one stripe or another. Anthony Munoz being the top rookie, rated the 5th best tackle in the NFL by Proscout, Inc. in 1980.
Blair Bush was a consensus All-Rookie pick in 1978 as was Anderson in 1996 and Zeitler in 2012.

Greg Cook is the #1 QB followed by Andy Dalton. David Klingler, 1992 All-Rookie, gets honorable mention. Klinger started four games in a season where there were no real standout rookie quarterbacks. Purists may not like seeing his name listed.

Bob Trumpy made the East AFL-All-Star game and Dan Ross was a solid rookie starter and a consensus All-Rookie pick in 1979. The wide receivers are particularly strong for rookies. Isaac Curtis was a Pro Bowler and totaled 45 catches for 843 yards (an 18.7-yard average) and 9 TDs. A.J. Green was also a Pro Bowler and had a 1,000-yard receiving season as a rookie. Cris Collinsworth was a Pro Bowler, consensus All-Rookie, and a 1,000-yard receiver as well in 1981. Eddie Brown wasn't a Pro Bowl but put up excellent numbers for a rookie with his  53-942-17.8-8 line.

Paul Robinson, 1968, and Ickey Woods, 1988 are the First-team runners with Corey Dillon, 1997 and  Boobie Clark, 1973. Robinson was an All-AFL selection and Woods led the NFL with a 5.3 yards per rush. He also had 15 rushing touchdowns and a great dance. Jeremy Hill, 2014 is a strong honorable mention. Giovani Bernard, 2013, was a narrow miss for one of the top slots but still merits a strong honorable mention. Ryan Hewitt, get a mention since he was a 2014 All-Rookie at fullback. In this set of articles, we didn't pick rookie fullbacks in the mold of Moose Johnston or Lorenzo Neal. But if in recent years, any got some special mention we will not them.

Horst Muhlmann, 1969, is four top rookie kicker and he's backed up by Doug Pelfrey, 1993. We take into account era so the highest kicking percentage doesn't always get the top spot. Clint Stitser, 2010, is the top special mention. He was a consensus All-Rookie that year.

Guy Frazier was an excellent special teams player as a rookie on the 1981 Bengals AFC Champs and Daze Jones led the Bengals with 18 tackles and a forced fumble in 2006.

David Verser gets an honorable mention as a kicker returner in 1981 since he was All-Rookie as selected by Pro Football Weekly. Mitchell Price, 1990, too, gets an HM as well as Quan Cosby for his consensus All-Rookie season of 2009 and Alex Erickson, 2016.

Carlos Dunlap is the top designated rusher as a rookie and he's backed up by Robert Geathers for now. By year's end, Carl Lawson will take the Second-team spot from Geathers and could challenge Dunlap's top spot. In 2010, Dunlap was All-Rookie and had 9.5 sacks in 12 games (no starts). Currently, Lawson has 4.5 sacks in 7 games (1 start).

We almost went with Thurman over Bergey even though Thurman's career self-destructed. His five interceptions is a high number for a middle linebacker in this era and he also had 5 forced fumbles and was in on a couple of sacks. However, Bergey averaged over 10 tackles a game and was also good in pass defense.