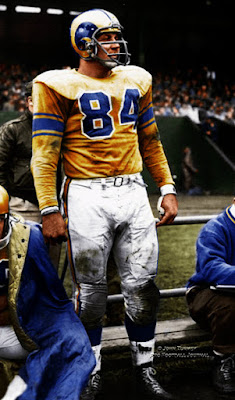 During yesterday's blowout loss to the Eagles, the graphic on the television screen stated that the Bears inability to run the ball was their worst since 1952. However, no details were given, and my thoughts were that we should start our week with some history.

The Bears and Rams, since 1949, had begun an interesting rivalry that had an impact on the conference race every season. The Bears faded down the stretch in 1951 and the Rams had won their only championship in Los Angeles. The Bears entered the game with a record of 2-2, while the Rams were struggling at 1-3 and had given up 646 yards rushing in the first three games of the year. Second-year year man John "Kayo" Dottley has proven to be one of the better fullbacks in the league for the Bears. Kayo is injured in the game (14 carries for 36 yards), and halfback Chuck Hunsinger struggled as he loses 24 yards rushing on 8 attempts.

Though listed as a halfback on the roster, Wilford White starts at left split end and has made a couple of fine receptions early in the game. He beats right safety Herb Rich on a skinny post, and rookie Night Train Lane on an out pattern. Late in the 4th quarter the Rams are in control 24-7 and White is now playing tailback. He gained 11, 2, 5, and 4 yards rushing on consecutive plays.

The Bears are aligned in a double tight end trips right formation with an empty backfield. Valuable Harry Thompson is in at right defensive end (who was filling in for Andy Robustelli), and is quick on the snap and penetrates the Bear backfield forcing White to stop, and turn back to the right. Right linebacker Don Paul is on the "red dog" and is in hot pursuit with assistance from All-Pro middle guard Stan West. White's path back to the right is cut-off, and he is weaving his way back towards his own end zone. Right safety Herb Rich flashes into the picture and White is trapped inside his own 5 yard line. West wrenches the ball loose, and the pigskin bounces sideways as a lumbering Ken Casner scoops up the ball and scores from the two yard line. The play-by-play lists the scoring play at the 11:07 mark of the 4th quarter.

The last time the Bears get the ball in the game Eddie Macon is now in the game at halfback. The Papa Bear George Halas has seen enough as White NEVER carries the ball again in his career. In the rematch later in the season White catches 1 pass for zero yards. The Chicago Bears attempted 37 running plays for 1 yard total due to White losing 51 yards on the play discussed above.
Posted by TJ Troup at 5:44 AM