OPINION
By John Turney
In a season full of heart-breaking injuries there have been some excellent first-half performances. Here are our picks for the 2017 Pro Football Journal Midseason All-Pro Team: 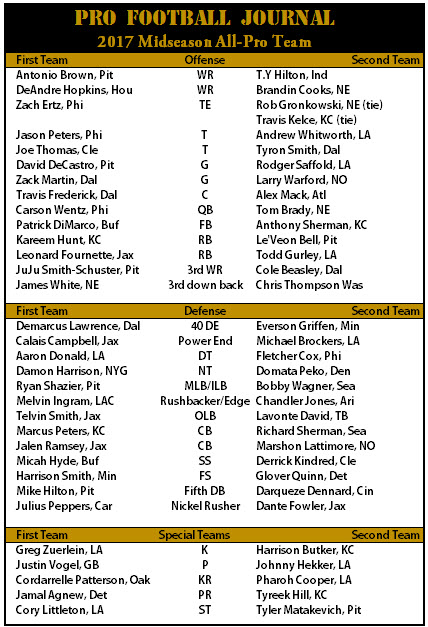 Offense
The Steelers Antonio Brown is a clear choice for the top receiver for the first half.  T.Y. Hilton's big game today edged into the Second-team slot. DeAndre Hopkins shares the First-team with Brown and Brandin Cooks has been key in early season games, though has faded some in recent weeks.

Our third wide receiver slot goes to JuJu Smith-Schuster of the Steelers on the First-team and Cole Beasley of Dallas on the Second-team. We pick a non-starter for our third receiver or someone who starts when the offense is in a typical 11 personnel package. If the Rams offense keeps going like it has and Cooper Kupp starts catching the few he's dropped he could challenge for this slot by season's end.

Injured-reserve players Jason Peters and Joe Thomas get the starting tackle slots for the first half of the seasons and clearly won't be on our season-ending All-Pro team but it's our nod to a couple of great players—and they both were outstanding before being felled by injuries.

Andrew Whitworth of the Rams LA and Dallas's Tyron Smith are the Second-team picks. Whitworth not only allows few sacks, he has allowed very few pressures. Smith is still a physical marvel.

David DeCastro (Pittsburgh) and Zack Martin (Dallas) are the best guards we've seen this year. Followed by Rodger Saffold (Los Angeles) and Larry Warford, (Saints). Warford has been injured for the last few weeks but in the early season he was looking worth the money the Saints paid him. Saffold has been through a lot in his career, but watch his film this year, he's making great plays blocking downfield and also in the times the Rams do inline pulling and traps. He's also held his own in their zone blocking schemes. When you see some of these Rams long plays you often see #76 involved in making them happen.

Travis Frederick of Dallas and Alex Mack of the Falcons rate, so far, as our top centers with Jason Kelce third.

Our quarterbacks are (1) Carson Wentz, (2)Tom Brady, and (3) Alex Smith.There is so much clutter out there on quarterbacks we will let others do the explaining. We'll just keep to our list.

We still pick a pure fullback, though fewer and fewer teams are using 21 personnel. To us, Patrick DiMarco of the Bills and Anthony Sherman of the Chiefs do the best job.

Kareem Hunt of the Chiefs and Jacksonville's Leonard Fournette take the top two slots, though we should really pare it down to one. But from time immemorial there have been two running backs on All-Pro teams, even when they try a "Flex" player. Hunt is clear #1 and Fournette was right there but he's been in trouble and may not hold this spot long but he's still leading NFL with 99.3 yard rushing per game and has boosted the Jaguars offense tremendously.

The backups are Le'Veon Bell of the Steelers and Ram Todd Gurley. Bell is only averaging 3.9 yards a carry but he's a good pass catcher and in seemingly building momentum as the end stretch approaches. Gurley has been very good catching passes and taking them for a lot of YAC (9.0 per reception) and is showing his 2015 Rookie of the Year form that was missing in action in 2016.

We also choose a 3rd down back and our top one is James White of the Patriots and he's followed by Chris Thompson of Washington. Both are vital to their respective teams passing game.
Defense
On defense, our corners are Marcus Peters and Jalen Ramsey backed up by Richard Sherman and Marshon Lattimore. Lattimore will be the Defensive Rookie of the Year if he keeps his current pace up. The Seattle defense has been burned some this year but I've not seen it happen much to Sherman. Peters is so fun to watch and Ramsey has been solid.

Micah Hyde is out top strong safety and  Derrick Kindred of the Browns is our Second-team pick. Kindred leads the NFL in run/pass stuffs on a team that has been great versus the run. Harrison Smith is the do-everything free safety and we picked Glover Quinn of the Lions to back him up.

Our fifth defensive back, (a non-starter who may or may not play in the slot) is Mike Hilton of the Steelers and his backup on our team is Darqueze Dennard of the Bengals.

Our pass rush specialist, again a non-starter, is Julius Peppers who is back with the Panthers and has 7.5 sacks in the first half of the season. Dante Fowler of Jacksonville is our "next-best".

Our base ends are a bit complicated. Calais Campbell is playing the strong side in a 4-3 defense after years of being in a 3-4, but he's doing a lot of the same things and he plays defensive tackle when Fowler comes into the game. In this hybrid role he's made 34 tackles and 11 sacks on a good Jaguar defense. Brockers began the season as a nose tackle and was doing his usual of pushing blockers back and drawing double teams. However, Wade Phillips moved him to 3-4 end in week three. He's been excellent versus the run and is also rushing the passer inside in the Rams nickel and dime packages. He does not have the sack numbers (just two) but he's putting pressure on the QB and keeping others clean. He has 33 tackles (4 stuffs).

Our rush tackles are Aaron Donald, first, then Fletcher Cox. Donlad has 19 tackles (4.5 stuffs) and 4 sacks while Cox has just 11 tackles and stuff but has 4.5 sacks and is part of a solid run defense.

Our inside/middle 'backer Ryan Shazier of the Steelers who had made 64 tackles, has 8 passes defenses, 4.5 stuffs, 2 INTs and 2 forced fumbles and he's backed by is Bobby Wagner of Seattle (60 tackles, 3.5 stuffs, 1 INT). Shazier has just been all over the place, run stops, knocking down a pass. Wagner, too, but to us Shazier has just made more plays this year.

Our Rushbacker/Edge rusher is Melvin Ingram of the Chargers and he's followed by Chandler Jones of the Cardinals. Yes, we are snubbing Von Miller and Khalil Mack.

Miller has made 31 tackles (4 were stuffs) and has 8 sacks. Mack has 46 tackles, 4.5 sacks and 3 stuffs. Both are fine numbers for a half-season but they have not stood out on film to us as much as in past seasons. Maybe the "back 9" will wake them up but they have been good, not great this year.

Ingram has 32 tackles and 8.5 sacks and a forced fumble but his big plays have often come when the game was on the line. That is, at least, our view. Chandler Jones plays more than "edge" if you will. He moves around, drops into coverage, rushes the passer, he's another hybrid player you see all around the front seven.Jones has 31 tackles, 9 sacks and 6 stuffs so far this year

For our base linebacker, our top slot goes to Telvin Smith and Lavonte David. David has been nicked a couple of games but is showing us a lot (as he usually does). He has 43 tackles (3 are stuffs) and he leads the NFL in forced fumbles with four. Smith, our First-team pick has made 62 tackles (7.5 for stuffs), 2 INTs, a forced fumble, a sack, four passes defensed and one of his two interceptions was a pick 6. Smith really has played at a Pro Bowl level the past two seasons, maybe this year he will get his due.
Special teams
It hasn't been a stellar year for kickers, lots of the usually dependable kickers are not as consistent as they have been in past seasons. There have been lots of missed field goals and PATs as well.

Greg Zuerlein has been the best so far, with one missed field goal no missed extra points and leads the NFL in scoring with 99 points.  Our Second-team kicker is Harrison Butker who took over for Cairo Santos (who hadn't missed a kick) and has missed just one kick. In addition to their accuracy both Zuerline and Butker both have good legs (Zuerline's better of the two) and are near the top in the league in touchback percentage (both around 77%).

Here are the kickoff leaders this season, we picked Patterson over Cooper because he's still more of a threat but Cooper has the NFL's only kickoff return for a touchdown this year. 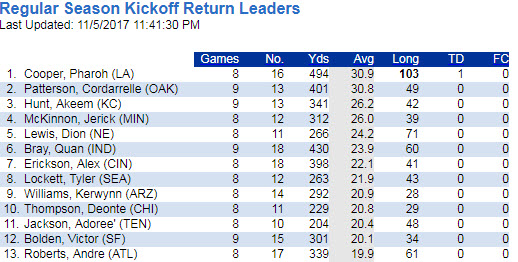 Jamal Agnew's two touchdowns make him #1 and we went with Tyreek Hill for the same reason we went with Patterson in the kickoff return slot. Sure, there are some with better stats but Hill is the most feared punt returner in the league.

When Cory Littleton blocked one of Brad Wing's punts today we elevated him to the top special teams slot. With Greg Zuerline kicking and Johnn Hekker punting the Rams coverage units don't get a lot of opportunities to make tackles. Littleton is one of their better playings running down on kicks and punts but he wasn't going to have a year where he has 15 or 20 tackles. However, it was his second punt block of the season, something a Ram hasn't done since 1996 (Antonio Goss) and that was enough to move him to the First-team position. With one more blocked punt Littleton can tie Rams record of three held by Nolan Cromwell in 1987. The Second-teamer is the Steelers Tyler Matakevich who himself has a block and 8 special team tackles.

For the punter, we looked pretty deep. Johnny Hekker is the best punter and has been for a few years. But, does that mean he's having the best first half of the 2017 season? We wanted to check and look at the same things now as we did when we came to the view that Hekker has performed like a generational punter so far in his career.

For the First-team Midseason All-Pro, we picked Justin Vogel edging Mr. Hekker. Vogel's net yard average to gross yards percentage was slightly better (96.9% to 95.3%). Vogel doesn't have a touchback and Hekker just one. Hekker and his coverage units have allowed just 41 yards in returns and Vogel 46.  Brett Kern and Marquette King have allowed more yardage, have more touchbacks and a lower net/gross percentage even though they are first and second in both gross and net, respectively. A sleeper pick would be Bradley Pinion of the 49ers who is our lone honorable mention. He's a very efficient punter even though his groos average is not high. 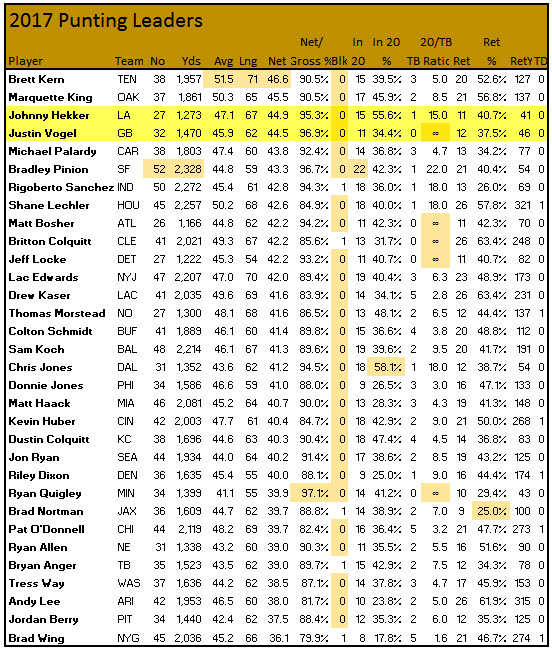