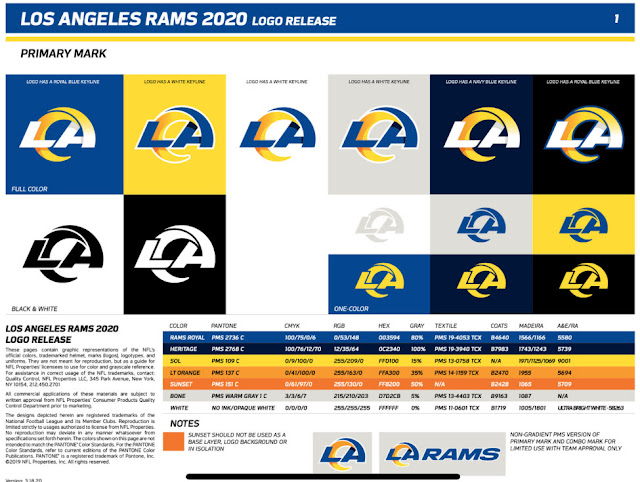 Yesterday. the Rams released new colors, a new primary logo, secondary logo, and wordmarks yesterday via the Internet. Here are a few of the key players identified in the video released by the Rams—

The reviews were mixed, to be generous. It's accurate to say that the creative team at Nike and the Rams and the NFL "didn't get it right the first time", at least according to the majority of the fans. 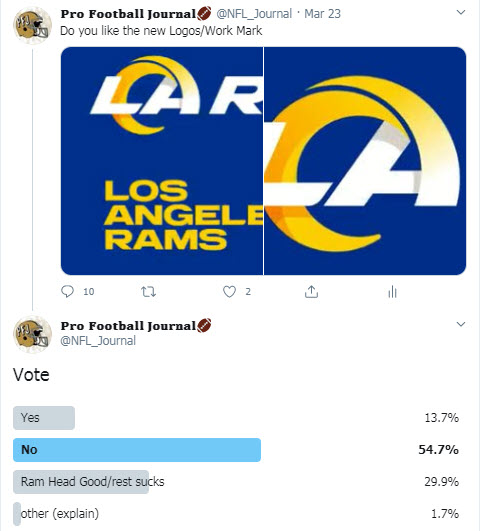 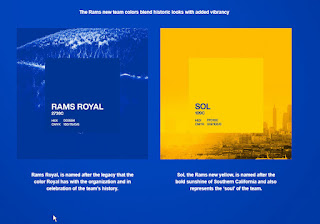 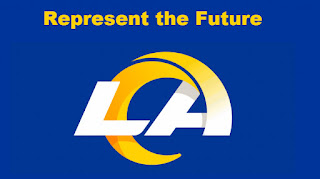 Additionally, according to an interview given to Rich Hammond of The Athletic, Rams COO said  there was to be "grand debut throughout Los Angeles on the night of Saturday, March 21, to coincide with the start of Aries in the zodiac, which is the month of the ram." (Could this get more pagan?—maybe they need to page Tom Hanks to reprise his role in 'Dragnet'.) 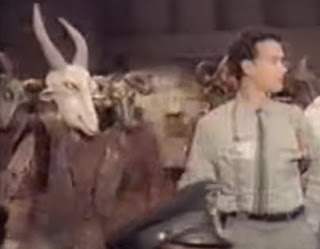 Said Jack Youngblood via email, "Looks like the Chargers to me. That isn't us". Former longtime Rams Public Relations Director Rick Smith concurred on Twitter "Rams logo is soft.  I don’t see any football toughness in it. Honestly, at first blush, I thought I was looking at a Chargers lightning bolt."

There is even a Change.org petition asking Rams to reconsider. You can see it HERE. The goal for the petition is 5,000 signature. As of this posting they have nearly 4,000. Will Demoff take it seriously? Unknown.

Secondary Logo—B
Rams fans were more positive about this logo.

Though very quickly Twitter artists improved on it, according to many commentators. The top on increased the angle of the head and widened and colorized the eye and widened the cheek, the second added the wordmark and a mouth to the Ram head and is a deeper blue. 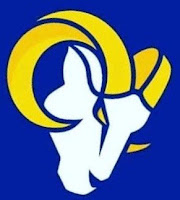 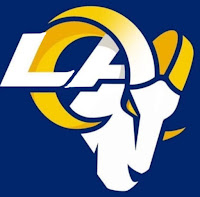 Wordmark—C
Boring. It looks like a basic Arial or Copperplate font. Comments like that we gleaned from Ram boards. Not awful. Not stunning. Not the work of, as Kevin Demoff called it "world-class artists", that's for sure. We give it a C. That's maybe generous.

Logo lockup—F
If the primary logo fails then this does, too. Many said they see a crescent moon. Some see DaVinci's seashell. Some see a Los Angeles Charger lighting bolt. People should immediately see a Ram horn. Many don't.

The Ram horn is their brand, their identity. If anyone sees anything other than a horn then there is a problem. A big one.


Walk Down Memory Lane
Here are past Rams logos, some not official, though they did appear on Rams stationary in 1937 (the red and black ones) and some were used on officially licensed Rams merchandise in the 1970s. The white Rams head logo (no gold horn)  we are dubious of because it only appears in style guides in the black and white sections. And we never saw it after 1973 or so. We think the real logo was the Rams helmet with grey facemasks from 1974-80.

Felt pennants are also a way to gage what was used since in the early days it was like the Wild West, you could put any Ram on a pennant and "Los Angeles Rams" and sell it and, apparently, not get sued— 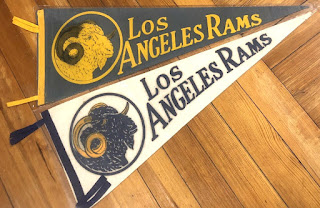 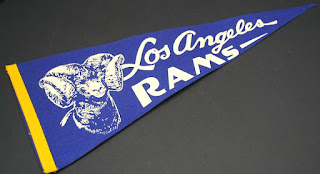 Then it became more uniform—

Here is a page from a 1970s style guide, perhaps 1973. You can see the Ram head logo is shown in the black and white section...with the helmets that were to be used in magazines and newspapers that were not yet color. These style guides were to help media and merchandisers and advertisers get the reproductions as accurate as possible. They exist to this day (see top photo) 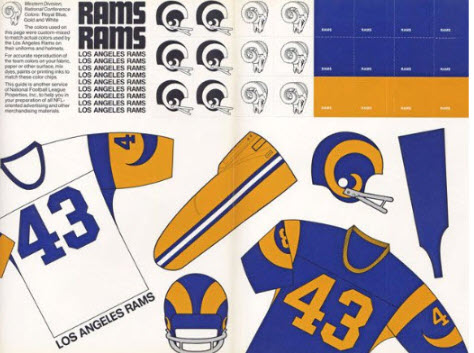 For more (and better) information we recommend going to Uniwatch.com. Click HERE.
We also recommend you go HERE for even more pertinent info by SportsLogos.Net

Next up, what the Rams brain trust and Nike will do with the uniforms. Thee is no ETA for them.
Posted by John Turney at 11:28 AM