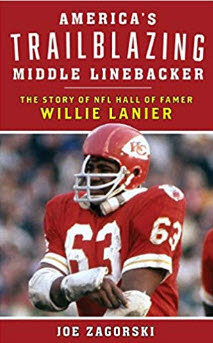 America's Trailblazing Middle Linebacker: The Story of NFL Hall of Famer Willie Lanier by  Joe Zagorski was released last month and we are pleased to say it was an excellent read.

As always Zagorski thoroughly researched his subject (28 pages of endnotes, index, and bibliography) and presents in well though thoughtful prose.

It covers Lanier's humble beginnings to his time at the historically black college Morgan State in Baltimore to being drafted by the Kansas City Chiefs in 1967.

It covers well his winning the starting middle linebacker job for the Chiefs, becoming the first African-American player to play that position regularly.

Zagorski also details the famous Chiefs defense which now features six Hall of Famers (including Lanier) and their Super Bowl season of 1969 and also the prime of Lanier's career when he was All-Pro or a Pro Bowler seemingly every year.

Throughout the book there are excellent anecdotes and quotes from teammates like Johnny Robinson, Bobby Bell and even an excellent quote from author TJ Troup. The book also lays out Lanier's post-NFL career in which he was as much a success in business as he was in football.

About the Author
Joe Zagorski has been a member of the Pro Football Researchers Association since the mid-1980s. He has written numerous articles for their monthly publication, The Coffin Corner, and for the blog Pro Football Journal.

His first book, The NFL in the 1970s: Pro Football’s Most Important Decade, was rated by Library Journal as one of the top ten football books in 2016. Zagorski is a former sportswriter for The Coatesville (Pennsylvania) Daily Record and The Evening Phoenix in Phoenixville, Pennsylvania. He currently resides in Oak Ridge, Tennessee.