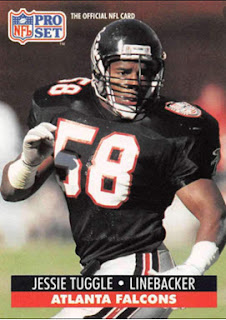 Jesse Tuggle made a lot of tackles, there is no doubt about that. But the source for those are the coaches tackles whic are always full of assisted tackles that raise the total significantly. This happens across all teams in the NFL.
We've posted on this before and Tuggle might be the epitome of this phenomenon.
Here are his totals as per Pro-Football-Reference.com (PFR)— 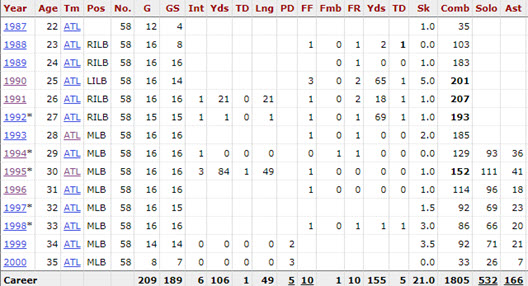 And here are his tackle totals using the gamebooks or "play-by-plays" as they used to be called—
The issue is when comparing tackles as some do it's not an apples-to-apples comparison. Here is a chart, again from PFR—

Using coaches totals through 1993 rather than gamebooks (used from 1994 through 2000) yields a total that puts Tuggle fourth on the list when he should be in the top ten.
Of course, this is better than the Falcons Media Guide which uses coaches total for all of Tuggle's career and has him with a total of over 2,000 tackles.

A coach can get defensive when their totals are questioned. Players. too. "Well, I loved those tackles" is one thing we have heard. After all, coaches use game tape to determine the tackles and a player who assists on a tackle is important in the scheme and result in the play. "Force" and "spill" and things like that are part of the mission of the defense. However, unless you have coaches' tackle totals for all the teams then they are useless for comparison.
In fact, tackle totals are not that useful anyway, but they are not a reality. Ideally, every series of downs would go something like this: run on first down, tackle for loss by the middle linebacker. Second down a pass knocked down by a cornerback. Third and long, hurry by a defensive end ball thrown away. Result: one credited tackle. If that happens a lot on a great defense, then the leading tackler would not have a lot of tackles. If a defense is a bend-but-don't-break variety then there will be a lot of credited tackles. So context matters.
So with all the given caveats, Tuggle's tackles are far less when using the same source as Lewis and Thomas and the others. So, just be aware of such things when reading nebulous statistics on the Internet. Knowledge is power.
Posted by John Turney at 2:54 PM