The Tale of Two Tackles Sources 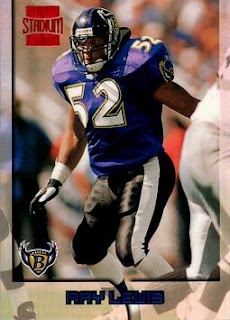 This is one of those things that doesn't matter a lot, but since the information is out there and used in articles, press releases, Information Guides, Media Guides, etc., we thought we'd take a look at it anyway because there are some interesting differences.

The subject is individual tackles for defensive players. There are really, two sources for this statistic. One is the gamebooks or what used to be called a "play-by-play".  At the end of each of these games books is a tackle chart that denotes who made how many tackles. These go back to 1960 in the AFL (for some teams—not all). They became fairly standardized in 1970 and by 1977 all teams were using them.

Here is an example of an assisted tackle by Ray Lewis and then a solo tackle by him.

Here is the tackle total for that game:

The other source is coaches tallies. These are the numbers that are derived from the coaching staffs from many of the teams grading the film and releasing the information to the team public relations department which in turn releases them in weekly releases and/or yearly media guides.

Here is the tackle total from that same game according to the coaches. They have him with 7 total while the gamebook states five (three solo and two assists).

One would think the more accurate of the two is the coaches stats. But Nick Webster and I have found that the coaches stats are almost always higher in total than the gamebooks. They give out a lot of "assisted" tackles but they are never defined. Therefore, there is no way to compare apples to apples when looking at tackle numbers from team to team unless one uses the gamebooks numbers.

Here are a few examples: 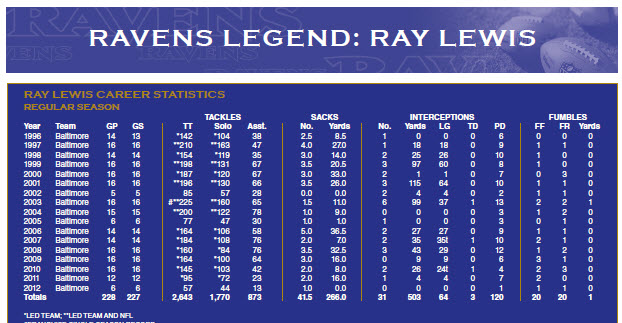 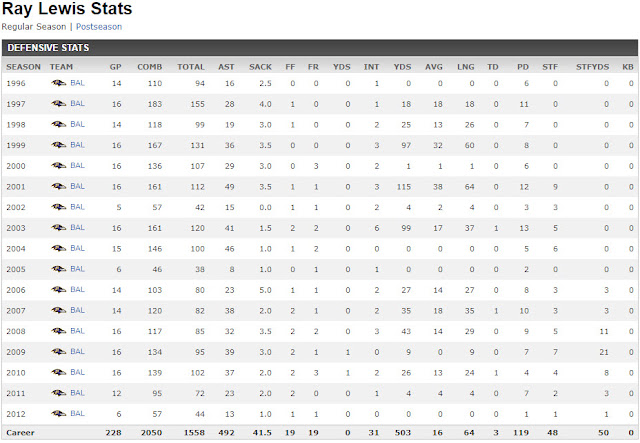 The top chart is from the Ravens 2013 Media Guide and it shows his career tackles (as per the coaches film study to be 2,643. The lower chart is from ESPN.com and they use Stats, LLC. who uses the gamebooks for tackles. Their total is 2,050.

Next example is Brian Urlacher: 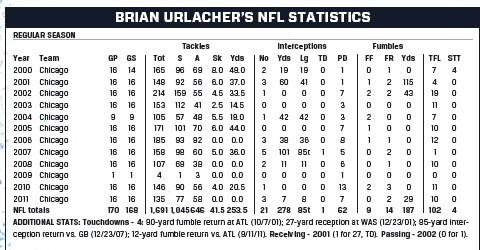 The top chart is from the 2012 Bears Media Guide and the lower on is his final season stats, we could not find one with a career total. Nonetheless, 1,179 is his career total when adding in the 2012 tackles to his previous total.

The chart below is from Pro Football Reference.com who, like Fox Sports.com and ESPN.com and NFLGSIS.com use the gamebook statistics and here his total tackles are 1,354. 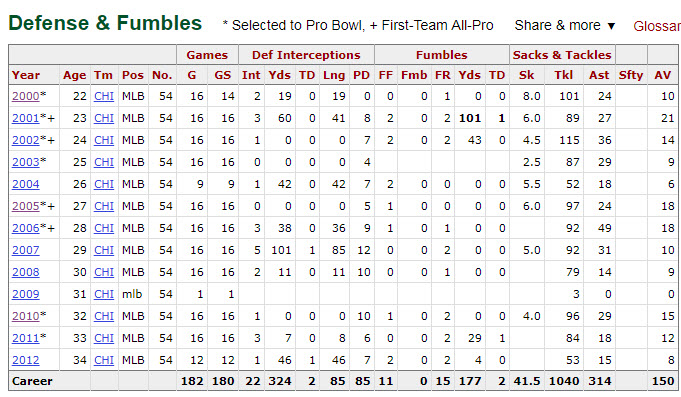 This chart shows a slightly different total, but similar to Pro Football Reference.com. It's from ESPN.com and we attribute the slight differences to human error and we never really bother to look for the discrepancies. 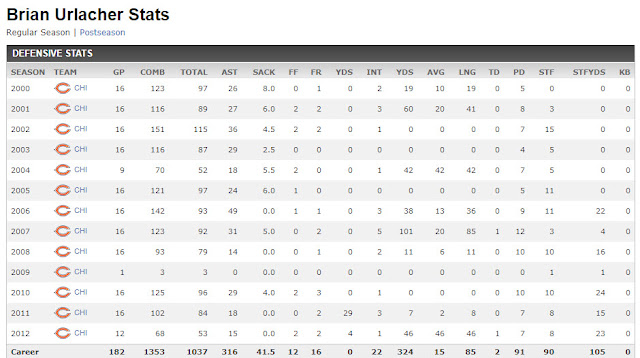 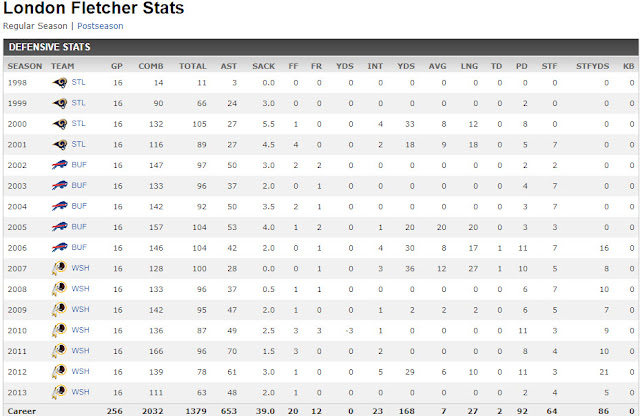 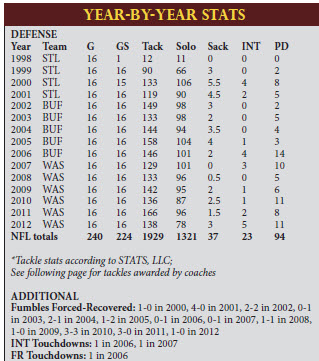 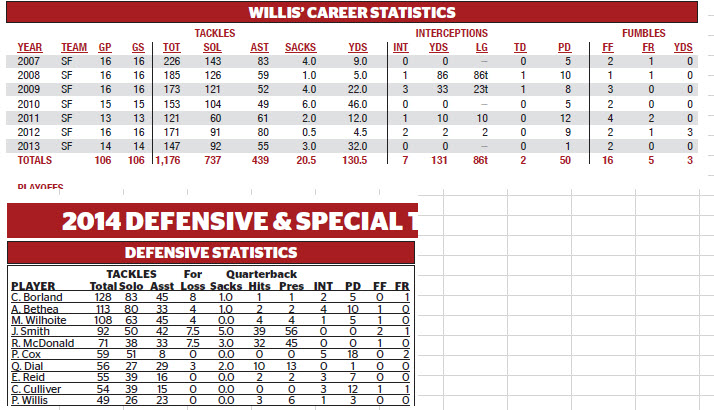 Willis ended with 1,225 tackles according to the coaches stats, with his rookie year of 226. Below are NFLGSIS.com, Fox Sports.com and ESPN.com numbers are taken from gamebooks and give Willis a total of 174 his rookie season. 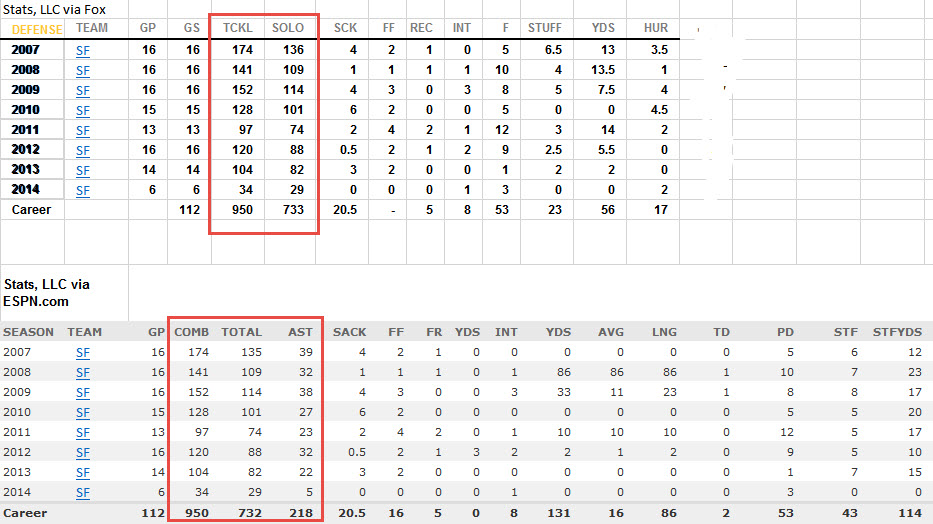 Now, there is one more wildcard on this and it's Pro Football Focus. They have their own film graders and part of what they do is tally tackles, assists and so on.
For Willis's career here are their totals

Now these discrepancies go back to the 1960s and 1970s and what is interesting is that it has been consistent through time, the coaches tackles are always higher than the gamebooks. However, what is also interesting is that the coaches data is almost always more accurate in forced fumbles. The coaches have always had the luxury of replaying a play over and over since they do their film grading on Monday. The statisticians have to make up their mind on what happened on a bang-bang play on the spur of the moment. They may get a replay or two in the booth but if the play happened in a crowd then they may miss who forced a fumble altogether. It would just go as a team fumble.

So, we take the good and the bad and learn from it. But the answer to the question of "How many tackles did Ray Lewis have in his career? is "According to who? Gamebooks, his coaches, Pro Football Focus?"

Of those who is most "accurate"?  Well, we prefer the gamebooks, but we take them all with a grain of salt. It's really a stat that can. at times, mean little.

If a defensive team forces a lot of 3-and-outs then they will not have as many opportunities for tackles. If a team has a scheme that allows for a lot of short completions then there will be more opportunities for tackles. What matters is that defenders are good, solid tackles, and don't miss many tackles. Sure, most schemes are designed for middle linebackers to make tackles, that's why Butkus, Nobis, Lambert and all the rest had high totals for their day and it continues until now.

Here is another poignant example. Beginning in 1976 the Broncos published the 'coaches film review' stats in their media guides and did so until recently. The one exception was 1986 when for some reason, they posted the press box numbers, which is the gamebooks or play-by-plays.

In 1984 Steve Busick had 195 tackles with the coach film review as the source. In 1985 he had 81 tackles using the press box stats. In 1986 the numbers were coaches review numbers but Ricky Hunley took Busick's starting spot and he had 164 tackles.

Did Busick make have as many tackles in 1985 than 1984? (He started all 16 games in both seasons). Or was there a difference in the 'accounting method'? 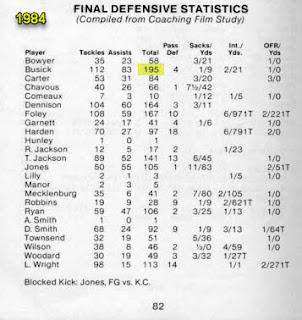 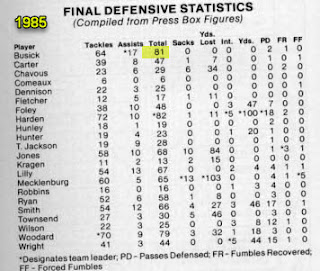 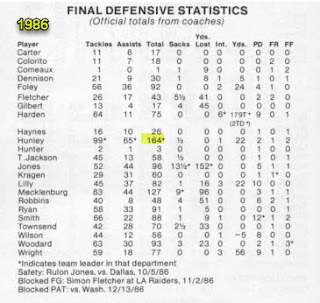 You can see the difference in the Broncos tackles above.
The same thing happened in Miami where they credit Steve Towle with 217 tackles, good for the top total in team history for a single-season. Well, the play-by-play shows 181. Still, on a per-game basis (remember there was a 14-game season in 1976) Towle is still number one, so there is that. Oh, and Chambers' 178 tackle total is 158 if one uses play-by-play tackle charts as the source rather than the coaches film review and Ernie Rhone's 171 is 165, which is very close for a tackle chart and coach total.

For Zach Thomas "real" apples-to-apples totals click here, the same issue exists with him as well.
Below is the list, according to coaches tallies, of the Cowboys career leaders in tackles:

When the gamebook tackles are compiled Woodson ends with 899 total tackles and Randy White totals 854. Jordan played prior to when the gamebooks consistently showed tackles, but he's likely the leading Cowboys tackler, not Woodson.

So, now the information is out there it's up to writers and bloggers to use meaningful tackle totals and when reporting on Lewis or Urlacher at least being aware of the differences in totals depending on the source.