This year we are picking All-Time All-Rookie squads for each of the NFL franchises. This iteration is the Ravens: 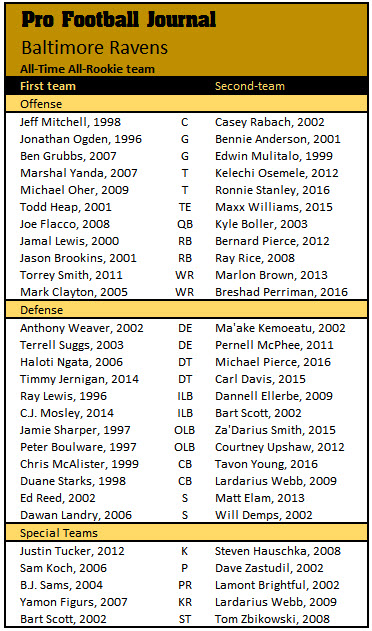 Since 1996, the first year of the Baltimore Ravens, likely no team has had more good rookies. The players on our Second-team would qualify for the First-team on several franchises.

Jonathan Ogden is a HOF left tackle but he began his career as a guard. Marshal Yanda is an All-Pro guard but began as a tackle and played well. Ben Grubbs was All-Rookie in 2007 as was Michael Oher. Joe Flacco was 11-5 as a starter in 2008 and led the Ravens to the playoffs. Jamal Lewis rushed for 1364 yards as a rookie and was part of the 2000 Super Bowl Champions.

Defensively Ray Lewis made 110 tackles and 15 of them were run/pass stuffs and that number unofficially led the NFL. Terrell Suggs was the 2003 AP Defensive Player of the Year and totaled 12 sacks and 5 forced fumbles. Haloti Ngata was an All-Rookie choice in 2006 as he anchored the Ravens run defense from his shade tackle position. Timmy Jernigan was an All-Rookie selection in 2014 as was C.J. Mosley.

Agree or disagree? Let us know in the comments section below.