This year we are picking All-Time All-Rookie squads for each of the NFL franchises. Today the Seahawks get our treatment: 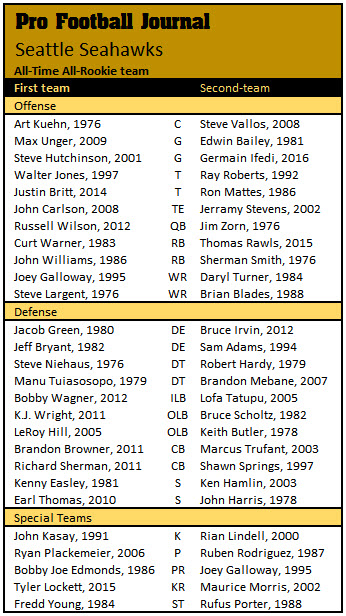 Behind Kuehn and Vallos at center are Chris Spencer, 2005, and Jean-Phillipe Darche, 2000, both of whom were All-Rookie choices in their respective rookie years but neither were starters. Darche, in fact, was only a long snapper. Often there are no starters at a particular position and those choosing All-Rookie teams have to fill out the ballots and in this case, Darche and Spencer got the most votes. Darche, however, is also an honorable mention on special teams as he was a snapper on those units for the Seahawks.

Max Unger and Steve Hutchinson are the First-team guards followed by Edwin Bailey and Germain Ifedi. The honorable mentions are Kevin Mawae, 1994, Pete Kendall, 1996, Floyd Wedderburn, 2000, and Matt Joyce, 1995. That's a pretty solid group of rookies. Mawae and Kendall were highly touted rookies but in this instance, we went with Bailey (16 starts) and Ifedi (13 starts) over the former two who did start but slightly fewer times.

Andy Heck, 1989, George Fant, 2016, James Carpenter, 2011, and Russell Okung, 2010 are the honorable mentions at tackle. Walter Jones and Justin Britt were season-long starters and wrapped up the top slots with Roberts and Mattes backing them up.

Pete Metzelaars, 1982, and Travis McNeal, 1989, were both All-Rookie selections but they did not put up the numbers that John Carlson, 2008, and Jerramy Stevens, 2002 did and therefore are regulated to the honorable mention list.

The same is true of the quarterbacks. Mirer and Zorn were All-Rookie and Russell Wilson lost out to Robert Griffin III but Wilson's rookie year was far superior to Mirer and Zorn. Thus we gave the Second-team to Zorn and made Mirer and honorable mention, though really, they could be reversed.

Darrell Jackson, 2000, and Doug Baldwin, 2011, are honorable mentions at receiver.

Jacob Green, 1980, Jeff Bryant, 1982, Bruce Irvin, 2012 and Sam Adams, 1994, were all All-Rookie, though none were stellar all were solid. Irvin was a designated rusher while the rest were starters. Green had 6 sacks, Bryant 3 in a strike-shortened season. People forget that Adams was a defensive end in base defenses his rookie year, moving inside in nickel/dime situations. Frank Clark is our honorable mention for his All-Rookie season of 2015.

Steve Niehaus, 1976, and Manu Tuiasosopo, 1979, are the First-team picks at defensive tackle. Niehaus had 9½ sacks and was All-Rookie and Tuiasosopo had 8 sacks and also was All-Rookie. Robert Hardy, 1979, and Brandon Mebane, 2007, edged honorable mention and All-Rookie pick Cortez Kennedy, 1990, who was a rotational player his rookie year.

Bobby Wagner, 2012, is the First-team middle linebacker followed by Lofa Tatupu, 2005. Tatupu was a Pro Bowler and totaled 104 tackles, 4 sacks, 3 interceptions (one for a score) and 10 passes defensed. Wagner, though edged him out with 139 tackles and 3 picks and on a better all-around defense. The honorables are All-Rookies Terry Beason, 1977, and Brian Bosworth, 1987.

The honorable mentions at outside linebacker are Terry Wooden, 1990 (All-Rookie), Anthony Simmons, 1998 (All-Rookie) Tony Woods, 1987 and Aaron Curry, 2009. Curry was a bust for his career, but in his rookie season, he did some good things.

Tyler Lockett, 2015 is top dog at kick returner and Maurice Morris, 2002 backs him up and Chris Warren, 1990(All-Rookie) is the lone honorable mention.

Agree of diagree? Let us know in the comments section below.
Posted by John Turney at 2:08 PM