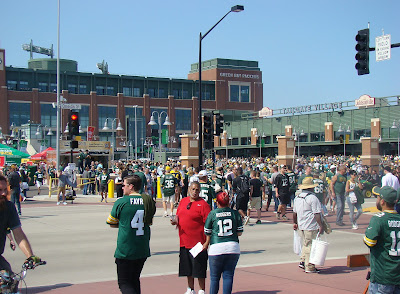 Lambeau Field less than two hours before the Packers and Seahawks kicked off.
Short of pitching a shutout, holding an opponent to nothing but field goals often provides a path to victory.

The Green Bay Packers did just that Sunday at Lambeau Field. A strong defensive performance kept the Seattle Seahawks out of the end zone and on the short end of a 17-9 score before 78,381 fans in the season opener for both teams.

allowed to mount just three drives that produced more than one first down. All three ended in field goals.

Blair Walsh capped the first, a 74-yard advance, with a 33-yard field goal that gave the Seahawks a 3-0 lead as time expired in the first half. Walsh hit a 21-yard chip shot to close to 7-6 in the third quarter. The former Viking then nailed a 41-yarder with six minutes, 21 seconds remaining for the final points of the game.

’s offense enjoyed its best moments during the time it spent setting up Walsh’s kicks. The unit amassed 197 of its 225 yards and 10 of its 12 first downs during the excursions.

The three advances were the only times got inside the Packers’ 40-yard line. In each case, stopped the Seahawks cold on consecutive plays to force the kicks. 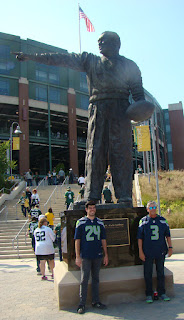 In the third quarter, went nowhere after picking up a first down at the 3. Safety Kentrell Brice held Chris Carson to no gain on first down, and again couldn’t connect on consecutive pass attempts, the second with defensive tackle Mike Daniels about to hit him.

Finally, in the fourth quarter, fired incomplete three times from the Packers’ 23. Paul Richardson, Amara Darboh and Jimmy Graham were his targets.

Allowing a team to score nothing but field goals is noteworthy. Last season, at least one touchdown was scored by both teams in 236 of 256 regular-season games.

Throughout history, the Packers have been successful when holding their opponents to nothing but field goals. The team has gone 63-12-3 (.827) in the regular season when doing so.

That record includes 25 straight wins. The last team to beat on field-goal strength alone was which booted seven in a 21-6 win on Nov. 18, 1996.

The last team to beat the Packers with only three-field goals in the scoring column was the Bears. Bob Thomas was good from 18, 49 and 28 yards out as eked out a 9-7 decision at Lambeau Field on Sept. 16, 1984.

Triplets
The 10 regular-season games in which ’s opponents scored nothing but three field goals.

Opening Day Opponents
The 2017 opener was the 12th for Mike McCarthy as head coach of the Packers. Over the years, the league has been tough on him (and his team) when it comes to the season’s first offering.

On Sunday, the Seahawks became the latest opening-day challenge. was 10-5-1 a year ago and beat the Lions 26-6 in a wildcard playoff game before falling to the Falcons 36-20 in the divisional round.

The Seahawks are expected to again contend for an NFL championship this season.

has faced similar tests since. In the last 12 years, no team has faced a more daunting opening-day lineup than have the Packers.

Nine of the 12 teams were winners the year previous. Eight won at least 10 regular-season games the year before opening against .

has done relatively well with the hand it was dealt. The Packers are 8-4 in season openers under McCarthy. Only the Patriots (10-2), Eagles (9-3) and Broncos (9-3) have done better.

Open to Adversity
Teams with the most difficult season-opening assignments (based on their opponents’ records from the previous year) since 2006.