FROM THE DELTA TO THE BIG APPLE: Jimmy Patton

LOOKING BACK
By T.J. Troup
Raised in a small town of Greenville, Mississippi Jimmy Patton played football at Ole Miss. When the Giants hierarchy sat down at the Warwick Hotel in late January of 1955 for the NFL draft they knew they needed depth and speed in the secondary.

So, with the 92nd pick in the draft (Unitas was 102) Jimmy joined the Giants. His rookie season was a learning process. He played some at corner, and some as a backup at right safety for starter Herb Rich. Jimmy had one of the most memorable kick return games in league history that season when he returned a Redskin kickoff 98 yards for a score, and a punt 69 yards for a score in the 35-7 shellacking.

The returns showed excellent speed and vision. Jimmy also intercepted the first pass of his career in that game. New York had started 1-4 but became a force down the stretch to finish 6-5-1. That momentum served them well as the Giants began the 1956 campaign with a record of 4-1. Herb Rich had played well in his career with the Colts, Rams, and now New York due to his savvy and experience. His injury set the stage for Patton to become the starter for the division champions that year. New York, with Jimmy playing a strong game, defeated Pittsburgh 17-14 at Forbes Field (Giants had lost both games to the Steelers in 1955).

Memorable plays abound in league history, and when captured on film they sometimes take on a life of their own. November 25th the Bears rally in Yankee Stadium to tie New York as split end Harlon Hill makes an incredible catch with Jimmy Patton attached to him as he crossed the goal line. Since the Bears had won the Western Division crown, the rematch would be for the league title!

Patton contributed to the cause with a 28-yard interception return and a 22-yard punt return in the 47-7 victory. Jimmy was quickly learning the intricacies of the Giants defense under the tutelage of former left corner and now defensive coordinator Tom Landry. Patton was aligned at right safety thus his partner in crime in the deep secondary was the already legendary Emlen Tunnell. His best friend on the team though was starting right corner, Dick Nolan. The two of them roamed the streets of New York. Imagine for a moment the adjustment for this young man; from the Mississippi Delta to the Big Apple.

Now after just two years in the league he was a champion. The 1957 season began well, and Jimmy scored against Pittsburgh on October the 20th on a 50-yard interception return. The Giants faded down the stretch and began slowly in 1958, yet once New York became injury free they began a winning streak. Led by a defense that allowed only 37 points the last four games of the season, New York tied Cleveland for first in the East. Beating Cleveland set the stage for what some call "The Greatest Game of All-time". The Giants and the Colts went to overtime to determine the league champion. Patton was selected First-team All-Pro and led the league in interceptions with 11. He had learned his lessons well and continued to play superb football over the course of the next three seasons—Jimmy was voted to the Pro Bowl each year and was also First-team All-Pro. He was regarded as the best deep defender in the game. 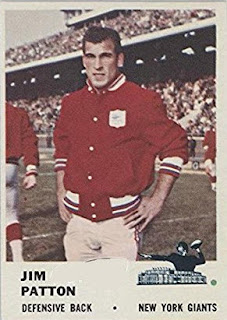 These seasons though did not bring another title to the Giants. The losses to Baltimore in 1959, Philadelphia in 1960, and Green Bay in 1961 were bitter to the New York veterans led by Robustelli, Huff, and Patton. Measuring a players greatness by using statistics can sometimes shed light on that man's consistency.

Over the course of 46 games, from the second game of 1958 through the first 12 games of 1961, Jimmy intercepted 30 passes. A remarkable achievement as only six other men before the merger have intercepted 30 passes over the course of four straight seasons. The men who accomplished this read like a who's who of defensive backs; Rich "Night Train" Lane, Emlen Tunnell, Jack Christiansen, Tom Keane, Bobby Dan Dillon, and Bobby Boyd.

A new resolve took over the Giants in 1962 as they overcame a sluggish 3-2 start to win nine straight and set up the rematch with Vince Lombardi and his champion Packers. This time though it would be at wind swept frigid Yankee Stadium. Since New York was now more of an offensive team led by the incomparable passing of Y.A. Tittle, the question on most folks minds was could the Giant defense stop the vaunted Packer attack. Green Bay's superb defense shut down the high powered Giant offense, but the Giant defense played an inspired game allowing only one touchdown. Patton was again First-team All-Pro.

The New York defense still played solid football, yet was not the same dominant force of the late 1950s under Landry. New York again earned an eastern division title in '63, and played a strong defensive game in Wrigley Field against the Bears. The Bear defense was not to be denied as Chicago gave New York a third straight championship loss. Patton received some All-Pro recognition, yet the new safety in town in the east was rough-hewn Larry Wilson of the Cardinals, and in the west Wood of the Packers, and the Bear duo of Taylor & Petitbon. When a team becomes old that is an aspect that must be overcome with an abundance of new talent.

That just did not happen in New York. The Giants defense in Patton's last three years just did not play well most of the time. A change in philosophy, and now Jimmy was player coach helping his teammate Andy Robustelli attempt to put a strong defense on the field. Thus in his last game on December 18th, 1966 Jimmy intercepted his final pass. He had intercepted at least once in all twelve seasons.

Patton, instead of playing deep centerfield, would now take the back out of the backfield man to man, or even blitz on occasion. Jimmy Patton had done it all as a player. He missed only three games in twelve seasons. Jimmy at 5' 10" and 183 lbs. had taken down many a bigger running back. He was a strong tackler, and feared no one. His savvy and excellent speed took him across the field to intercept time and time again.

He had returned kicks and punts early in his career. Pete Privite ("clubhouse special") designed a play in '61 with Erich Barnes and Jimmy as the ends on the punt team going downfield as receivers against the Eagles—and the play worked as Barnes scored in a key victory. June of this year my story entitled "nemesis" detailed defensive backs that intercepted at least 10 passes against a specific opponent. Jimmy Patton ranks second to all-time great Emlen Tunnell in this category as he pilfered 14 Redskin passes. He also intercepted the Steelers 12 times. Jimmy Patton is not in the Hall of Fame and of course due to his tragic death in a car accident in 1972 he would not be at his enshrinement, yet he must be viewed as a man who gave all he had to his team. Allie Sherman said it best; "he had the three qualities you want, consistency, top performance, and great heart".
Posted by TJ Troup at 2:07 PM