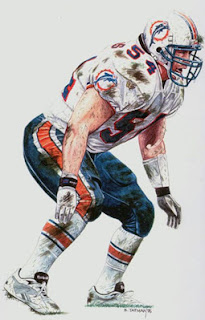 In 1984 the Associated Press added a second inside linebacker to their All-Pro format. This was done to reflect that most of the NFL teams at that time were playing a 3-4 defense and the previous All-Pro teams essentially shorted players from that position.

That continued through 2015 (with the exception of 1994 and 1995). It was eliminated this year as the AP chose to have electors pick three linebackers, rather than four (2 inside and 2 outside).

Because of this 12-man defense, there have been, really, extra inside linebackers making All-Pro which we have no issue with, the only issue we saw was that often two middle linebackers from a 4-3 were chosen as First-team All-Pros rather than one MLBer and one ILBer from a 3-4. That defeated the purported purpose of the change in 1984.

Perhaps no middle linebacker benefitted more from this format than Zach Thomas who made the AP First-team five times and was Second-team twice more.

It would be impossible to go back and say what exactly might have happened if say, in 1995, the AP switched to a 4-3 alignment as had most of the NFL or required one 3-4 ILB and one 4-3 MLBer, but from the voting we see that Thomas was never to top vote-getter, though he was close in 1998. It's a fair guess that his First-team All-Pros would have been Second-teams and his Second-teams, likely, honorable mentions.

When the NFL teams began moving towards a 4-3 defense in the mid-1950s it was not unusual to see three middle linebackers on one First-team All-Pro squad. Often outside linebackers (called corner linebackers at the time) were left off. It was common to see Joe Schmidt, Sam Huff, and Bill George as the First-team "linebackers" though all were "Mikes", or in the case of Huff "Meg" and George "Mac" using the terminology of their coaches at the time.

Because of the history of the All-Pro MLBers, please don't take this as any kind of knock against Thomas or his career, it's not. We like his career quite a lot, We just posted about this as we did some research on Ray Lewis and Brian Urlacher, who are both up for the Hall of Fame next year and Thomas's name was always in the mix.

Here is a review of Thomas's career: 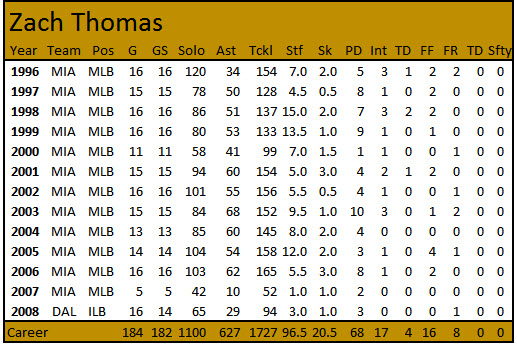 He had over 1700 tackles and 96.5 of them were run or pass stuffs behind the line of scrimmage. In 2001 he was second in the NFL in tackles (behind Ray Lewis). He led the NFL in tackles in 2002 (just ahead of Urlacher). He was fourth in 2003 and 2004. Again, in 2005 he was second and in 2006 he was again first. He also was voted to seven Pro Bowls and played for an excellent defense most of that time that was especially good from 1998 through 2003. Going back he was third in the NFl in tackles in 1996 and fifth in 1998. He was an every-down linebacker, staying on the field in nickel and dime situations and picked off 17 passes and defensed 68 in his career.

However, we do note that it is interesting that someone with fine credentials has yet to crack the Semifinalists list of 25 in any of the years he has been eligble.
Posted by John Turney at 10:58 AM