Jason Taylor Puts His Name in With the Mt. Rushmore of Defensive Ends 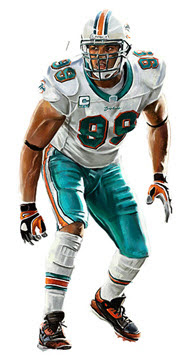 With the Terrell Owens not getting in the Hall of Fame hoopla, what got somewhat underreported is the significance of Jason Taylor being elected to the Hall of Fame on the first ballot. He became the fifth defensive end to be so honored. The other four? Gino Marchetti, Deacon Jones, Reggie White, and Bruce Smith. White was a 10-time First-team All-Pro, Smith and Marchetti nine time, and Jones a six-time First-team All-Pro.

Taylor's All-Pro selections are more in line with Howie Long, Chris Doleman, Richard Dent, Lee Roy Selmon and others as can be seen in the chart below. Nonetheless, Taylor survived a very tough and competitive process and emerged as one of those few NFL players who can claim that status. 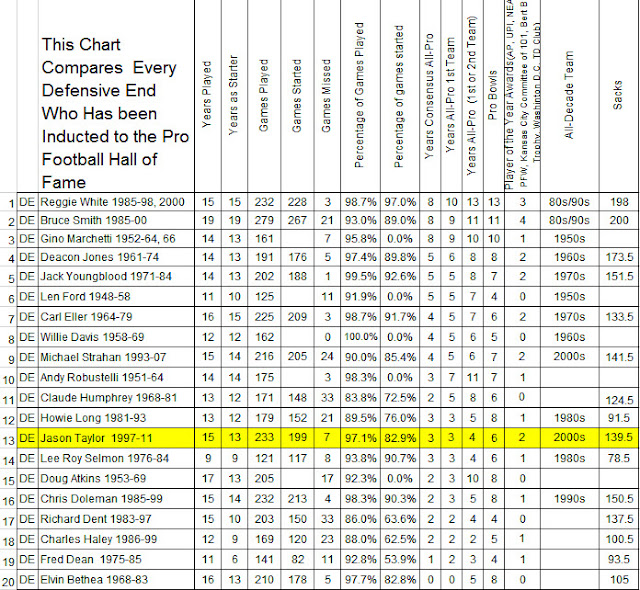 Notes: We have estimates for games started for the players in which blanks appear in the above chart, however, there could be errors in the data and therefore left it out. From film study, none of them started all the games they played, but their number of starts was very close to the number of games they played. Data in the 1950s is hard to come by as all game films are not available. However, our best estimates are that Marchetti started around 147, Ford around 118, Davis 150, Robustelli 172, and Atkins around 170.

Folks can debate if Taylor is worthy of that honor, after all, there have been some minorly questionable first-ballot selections in football and baseball and this is one of them. But having the names Gino, Deacon, Reggie, and Bruce listed with Jason Taylor just does not sound right. It connotes he was on their level. And he really wasn't.
Posted by John Turney at 8:55 PM