Update: Terrell Owens and the Hall of Fame

PERSPECTIVE
By John Turney
To augment this post I am adding a YouTube clip and a transcript of a common theme among those who feel slighted that Terrell Owens was "snubbed" by not yet being voted into the Pro Football Hall of Fame. While it does not cover everything, it shows, in my view how sometimes the numbers are not always presented fairly or completely when presenting T.O.'s case.

This is a clip from the Colin Cowherd show with Nick Wright making the case for T.O.

Nick Wright:  "Here is the reality. The relatability is the reason Brett Favre is in the Hall of Fame and Terrell Owens is not.

"You look at it. T.O. had more First-team All-Pros, they were both on an All-Decade team, they are both top two or three for touchdowns and for yards for their positions. They are the SAME GUY. And ‘oh, by the way’ T.O. was this disaster off-the-field. Brett Favre had pain pill problem, which I don’t begrudge him an addiction, but that happened. Brett Favre sexually harassed a team employee by sending the ‘Dramon Green’ photos. Brett Favre held the Packers hostage three straight years"

Colin Cowherd, “He did”.

Wright:  "He refused to mentor Aaron Rodgers. So this idea that T.O. doing situps in the driveway and making fun of Donovan McNabb keeps him out of the Hall of Fame when Brett Favre gets to walk in is absurd.

"I think they are both Hall of Famers but let me ask you one thing Colin, If you’re ranking quarterbacks how many names do you list before you get to Favre?"

Wright: “At least five, a minimum of five."

Wright: “But a minimum of five, right?. You’re ranking wide receivers how many names do you mention before you get to T.O.? The answer is two. Rice and Moss"

Wright: "That’s it. So T.O. is, in the wide receiver hierarchy, much higher than Favre is in the quarterback hierarchy. They both have jaw-dropping numbers. They both had off-the-field issues. On guy, if Favre didn’t get into the Hall of Fame, Peter King might have burnt the building down."

Wright “But no one expected T.O. to get in first ballot. That rubs me the wrong way." 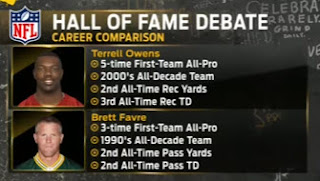 I would ask Wright, "Are you forgetting anything?"  He seems to know the subject well, so I can only assume he knows there are more than All-Pros and statistics. He would know about other awards like, maybe the Most Valuable Player award.

Did Terrell Owens win any MVPs? Did Favre? We all know Favre won three and he was an NFC Player of the Year in 2007.

Wright said, "So T.O. is, in the wide receiver hierarchy, much higher than Favre is in the quarterback hierarchy."

Well, that's pretty subjective, but it is a fact that the NFL Alumni used to poll former players for awards and did so from 1982 through 2010. Three times Favre was voted the NFL's top quarterback and never was Owens voted the top receiver.

Favre has a ring. Owens does not.

In overall statistics, Owens led the NFL in various categories six times called "black ink" or bold type and two of them were for longest reception in the NFL that season.

Favre has fifteen in black ink (and three more that are a negative). Owens led NFL in drops once, and was in the top four in drops seven other times and that may be a fair comparable to Favre leading NFL in interceptions.

So, my point to Wright and Cowherd would be that they are NOT the "same guy". And as far as the "hierarchy of wide receivers" I would guess if there were a poll taken of knowledgeable people with some experience (not fantasy football types) Owens might not rank as high as Wright suggests.

The NFL is coming up on its 100th anniversary and there are names out there, when put into context would likely outpoll Owens. Players like a Don Hutson, a Lance Alworth or a Paul Warfield. Maybe even a Larry Fitzgerald or Marvin Harrison or others.

When the NFL's 100th Anniversary Team comes out in a few years we will see if Owens is on it.

So, the point of this follow-up post is not to explain what happens in the Hall of Fame Committee meeting because I am not privy to what goes on in there. From media reports, Owen's off-the-field character is playing a major role. However, last year it was written that the drops were an issue and other things as well.

Owens is certainly qualified for the Hall of Fame but his waiting is not a travesty nor an embarrassment. Maybe it does rub some people the wrong way and that's fine. There have been other great players who waited longer and that is what needs to be understood.

When making the case for Owens, though, be complete and accurate. It's not right to say Favre and Owens were the "same guy" when MVP awards and Super Bowls and "black ink" are omitted. That smacks of either laziness or an agenda or worse.