Players with Broken Legs Are 0-4 in Super Bowls

LOOKING BACK
By John Turney
Alex Mack
According to ESPN, Alex Mack was the fifth player who played in a Super Bowl with a broken or recently repaired fibula to play in the Super Bowl:  Jack Youngblood (Super Bowl XIV), Charles Woodson, Tory James (both Super Bowl XXXVII), and Terrell Owens (Super Bowl XXXIX).

ESPN reported that Mack suffered the fracture during the NFC Game against the Packers.  ESPN describes it as "chip fracture'' above the plate Mack had inserted in his leg when he first broke the fibula in Week 5 of the 2014 season. He had a plate inserted to protect the leg at that time. He played in all the offensive snaps in Sunday's Super Bowl after receiving a pain-killing injection pre-game.
Terrell Owens
ESPN.Com reports this about Owens:
"Owens played 62 of 72 snaps in Super Bowl XXXIX, catching nine passes for 122 yards (six for 76 yards in the second half). This was despite him being seven weeks removed from a fractured fibula in his right leg and tearing a critical ligament in his right ankle, which required surgery. He also wasn't cleared to play by his surgeon, who inserted two screws in his ankle in that procedure."

Owens sustained the injury on December 19, 2004, versus the Cowboys. The surgery was performed on December 22, 2004, by Dr. Mark Myerson at Baltimore's Mercy Hospital. Myerson stated that two ankle ligaments were torn and that Owens also has a fracture a few inches below his knee that will heal on its own. 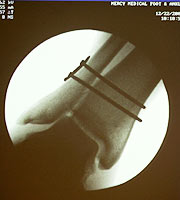 Says Owens, "It was an invasive type of surgery, so it’s not a good thing. [Two screws and a metal plate were inserted in the ankle.]"  Owens played in the Super Bowl 46 days after the operation and said after the game he took a pain-killing injection. 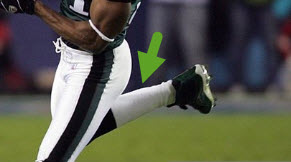 It has never been reported if either James or Woodson took injections prior to the games they played with the fractured legs, but Woodson said, in 2015, that "He took painkilling injections every week to ease the severe pain of a turf toe injury during 2001 season".
Jack Youngblood
Youngblood fractured his fibula on December 30, 1979 versus the Dallas Cowboys in the first half of that playoff game.

Fair use claim, for education and criticism
He missed snaps in the first half, had it taped up at halftime and played all the snaps in the second half, even recording a coverage sack in the fourth quarter.

Fair use claim, for education and criticism
Few even know that on the play that fractured his fibula, Youngblood was chipped by Billy Joe Dupree, the tight end, then blocked by right tackle Rayfield Wright, who was beaten to the inside by Youngblood on an inside swim more.
Then, with Wright on the ground, right guard Tom Rafferty bit Youngblood high while Youngblood's left leg was pinned against Wright's body (which was then on the ground) which is when the leag broke. As Youngblood was falling (he would have been free had the leg not snapped) the fullback Robert Newhouse hit Youngblood.
That makes four blockers who engaged Youngblood on that play.  Four.
He then played in the NFC Championship a week later, and two weeks after that played in Super Bowl XIV, and a week after that played in the Pro Bowl.

The break was sometimes misreported as a hairline fracture. Even in the NFL Films production "Top Ten Gutsiest Performances" writers John McClain and Norm Hitzges got it wrong. Said McClain, "What he had was a hairline fracture where the bone was cracked" and Hitzges said, "You can tape that and play with that".

It wasn't a hairline fracture. It was a clean break. "It snapped like a pencil", said Youngblood. Dr. Clarence Shields and trainer Jim Anderson confirm this. "Somewhere there is an X-Ray and you could see the break. It wasn't a compound fracture by any means, but it wasn't like the hairline fracture Denny (Dennis Harrah) played with during the '79 season".

[Harrah had a hairline fracture that bothered him but when it was X-rayed, nothing showed up. After a few weeks, the hairline fracture did finally appear and that's when Harrah missed a few games and came back and played with an ankle support.]

Technically, according to the medical reports, it was an "oblique fracture".Here are a couple of notes from the medical records. By April there was 70% recovery and in May the break was filling in even more. There was even the possibility of surgery if it didn't heal properly, something that would not need to be done with a hairline fracture. 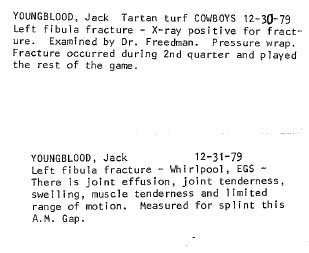 Youngblood played those games with a plastic support and took no pain-killing injections, but did take non-narcotic pain relievers.

Heroics aside, none of these players emerged from their Super Bowls with a ring, though Woodson won one with the Packers in 2010. They were a collective 0-4 in the games they fought through pain and injury.
Posted by John Turney at 3:05 PM