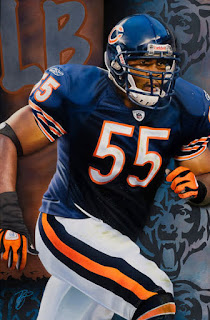 We've been featuring linebackers and their career stats over the past few months. This installment is Lance Briggs of the Chicago Bears. He was a two-time All-Pro (2006 and 2006), once consensus (2005) and was voted to seven Pro Bowls. He was also an alternate to the 2004 Pro Bowl.

Additionally, Sports Illustrated's Pau Zimmerman picked him to his All-Pro team in 2007 and he was a Second-team All-Pro in 2009 on an oddity:  Brian Cushing was originally voted to the AP Second-team but when he was suspended for violating the NFL's policy on anabolic steroids in May 2010, a re-vote was held and Cushing lost his spot and Briggs and James Harrison were tied in the re-vote for the final Second-team slot.

Briggs was a weakside linebacker in Lovie Smith's defense and was an every down 'backer. He played the same role for the Bears that Derrick Brooks played for Tampa Bay in the vaunted Tampa-2 defense. 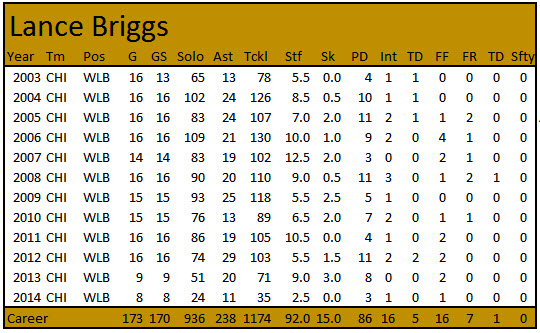 He made 107 plays in the backfield, 92 of which were run/pass stuffs (a PFJ exclusive stats developed by Nick Webster). He also had 86 passes defensed and intercepted 16 passes and scored six defensive touchdowns. Though he will not garner much Hall of Fame support, he still had a worthy NFL career.