Art Peed is an intriguing figure. I know very few have heard of him, not only because he played during the NFL’s rag days of the 1920s, but also because there is so little evidence that he ever existed.  Let me explain …

I first discovered Peed while researching the 1929 Buffalo Bisons for my book, Buffalo’s Forgotten Champions, which was published in 2004.  Peed’s (last) name appears in Buffalo’s lineup in the box score for the November 17, 1929 game between Buffalo and the Boston Bulldogs, substituting at right tackle for starter Ellie Comstock.  It is the only game in which his name appears, and he is not mentioned in the following day’s writeups in either the Boston Herald or Buffalo Courier-Express.  Curious, I went to what was the definitive source at that time for all things NFL, TOTAL FOOTBALL II, the voluminous tome of football statistics and demographics compiled by research stalwarts Bob Carroll, Davis Gershman, David Neft and John Thorn (1997-99).

Peed’s name, however, was not listed among the thousands of entries in the All-Time Player Registry.  But double-checking (and triple-checking when possible!) one’s work is an essential part of a historian’s job, so I pulled my trusty copy of the excellent Pro Football Encyclopedia by Tod Maher and Bob Gill. Peed was not listed in their registry either, but one game was credited in 1929 to Max Reed, the former Bucknell center who played nine games for the Bisons in 1925, so concluded that the authors had deduced that Peed was a misspelling for Reed.  My research, however, showed that Reed was not a member of the Bisons in ’29.  I filed Peed/Reed issue away for a while and continued with my research. 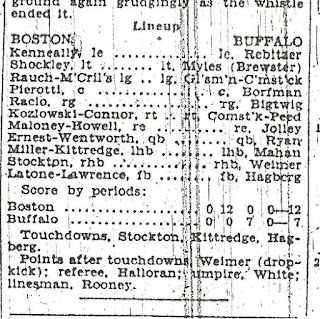 A short while later, I came across a game program for the Bisons’ following week (November 24) matchup with the Chicago Bears. There, in black-and-white, was Peed’s name again!  What’s more, the program provided a little more information, including his first name (Art) nominal position (guard), jersey number (27), weight (205) and college (North Carolina). It seems, however, that he did not appear in this game as his name did not show up in the next day’s box score.  But it was enough to convince me that TOTAL FOOTBALL II and The Pro Football Encyclopedia had gotten it wrong and set out to track down this mysterious man. So, before I could finish my manuscript, I had to resume the dig.  I subsequently visited the National Obituary Archive website and discovered a death listing for an Arthur Peed.  Included in the listing was Peed’s date of birth, which was July 11, 1904, which would have made him 25 years old in 1929. That made sense. It gave Peed’s residence at the time of death (March 1, 1981) as Batavia, Ohio.

Since this was 2002, long before everybody ditched their landlines in favor of cell phones, I found a listing for a Ralph Peed in Batavia in the White Pages (remember those?) and dialed the number.  Mr. Peed seemed a little surprised by my call but was willing to talk and listen to my wacky story. I seem to recall that Mr. Peed identified himself as Arthur’s grandson (for some dumb reason I did not jot down that singular bit of information while I had him on the phone—d’oh!). I do, however, recall that he said he was unaware if Art had played college football, let alone professional.  He said he would ask family and see if there was anything he could dig up and get back to me.  I never heard from him again. The number I had for Mr. Peed is no longer in service, and internet searches show him as deceased.

For some reason, I was convinced that Peed was a legitimate player on Buffalo’s 1929 squad and decided to include his name in the complete listing of players who appeared in games for the Buffalo All-Americans/Rangers/Bisons of the 1920s.

Sure, he could have been the Bisons’ version of Captain Tuttle, the fictitious surgeon invented by Hawkeye Pierce and Trapper John McIntyre on the 1970s TV show M*A*S*H*, but that was very unlikely. Perhaps the name was a misspelling of Reed after all, as Maher, et al., seemed to believe, but my gut told me otherwise. The Buffalo teams were populated with several players who appeared in one game only, like Shirley Brick, John Rupp, Wes Bradshaw, Eddie Casey, Gus Sonnenberg, and several others, so why not Peed?

Which brings us to 2021. On a lark, I recently visited Tod Maher’s terrific Pro Football Archives website and saw he has Peed listed.  Curiosity peaked, I then went to the Pro Football Reference website and, lo and behold, Peed was listed there too!  I do not know when these sites decided to include Peed, or why, but I felt somewhat vindicated.

I pulled out one more resource, the ESPN Pro Football Encyclopedia edited by Pete Palmer, Ken Pullis, Sean Lahman, Matthew Silverman and Gary Gillette (2006), and voila!  There was Peed’s name again!  That three highly respected sources were recognizing Peed’s existence gave me satisfaction that my hunch was, apparently, correct.  And since my recognition of Peed came first, well …

But I am continuing my search for Art Peed. I need to close the probability gap from one percent to zero. He is not showing up on Internet searches, and his family couldn't verify whether he and their namesake father (or grandfather) are the same person. A picture, a roster, a game account …anything.  Eventually, I will find it!