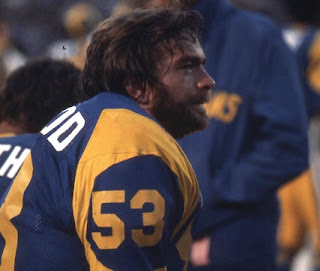 The "other" Youngblood on the Los Angeles Rams was Jim Youngblood, not Jack the Hall of Fame defensive end. Jim or "Jimmy" as he was known as the outside linebacker who played seven seasons on Jack's outside shoulder—usually on the left side of the Rams defense.

But we are getting ahead of his story.

Youngblood played linebacker at Tennessee Tech and in both 1971 and 1972, he was a "Little All-America Selection" by the Associated Press and was All-Conference both seasons as well and the conference Defensive Player of the Year both seasons, too.

In the 1973 NFL draft, Youngblood was the third of three Second-round picks the Rams had. He was 6-3 231 pounds and "could run" with a 4.8 forty time to his credit. The initial plan was for him to play inside since, at that time, Jack Reynolds (the Rams MLB from 1973-80) had not established himself as and was a bit of a disappointment as a 1970 #1 draft pick. Additionally, he was from the George Allen-era and in 1973 there was a new coach—Chuck Knox and he wanted 'his' guys and Jimmy was going to be one of them. 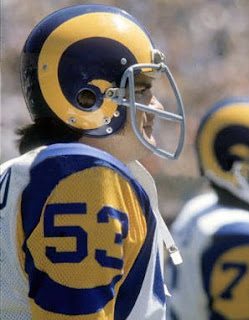 As a rookie and for the next few years Youngblood was a top-flight special teams player for the Rams. He was not the best in the NFL, that honor would go to likely Rusty Tillman or Warren Bankston but he was likely in the top handful core special teams players in the league.

In 1974-75, his second season and third seasons his role expanded to playing the MIKE in nickel situations—his height and speed give him some physical qualities that the starter, Jack Reynolds, lacked. So, though teams did play a lot of sub defenses, when the Rams did Jimmy would play one of the linebackers along with Isiah Robertson.

In early 1976 he was still in that role until Rick Kay, the left linebacker hurt his knee. Kay had replaced starting left linebacker Ken Geddes who went to Seattle in the 1976 expansion draft. So, being thin on the outside the Rams moved Youngblood to that position and he seemed to find his role in the NFL—left linebacker.

There was a hiccup in 1977 when Jack Reynolds held out in a contract dispute and Youngblood moved back to the middle and rookie Bob Brudzinski played in Youngblood's spot until Hacksaw returned but for all intents and purposes, Jimmy was the left linebacker from 1976 through 1982.

In 1976 Jimmy was solid, perhaps still learning, but still was not yet making game-changing plays. Those started to come in 1977 when he got his first pick-six and it built from there. 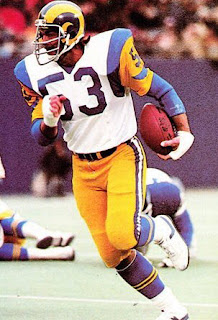 In 1978 he was All-NFC and caught New York Post's columnist Paul Zimmerman's eye who named him All-Pro on his personal team. Youngblood totaled 123 tackles and 5½ sacks and 15 passes defensed.

His career-high in sacks was interesting in that Sport magazine said, quoting an NFL scout, "(H)e alternates his rush with Jack Youngblood and it confuses the hell out of tight ends". The reason for that was that Jack had a pinched nerve in his shoulder and was not as effective in his pass rush the last month of '78 and Jimmy had to pick up some slack. 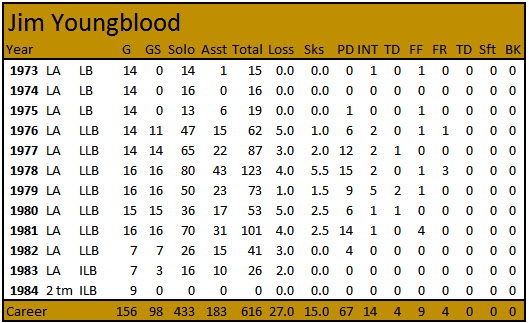 The following year he made his only Pro Bowl and was Second-team All-Pro. He picked off five passes taking two to the house all the while being Jack Youngblood's wingman on the left side of the D.
By 'wingman', it often meant that when Jack tried his signature move of slipping inside on toss plays or sweeps to his side it left the outside open and Jimmy could see the move so he'd compensate to make sure the outside gap was filled.
This was very similar to the relationship Dave Robinson and Willie Davis developed in Green Bay a decade earlier. They, as a LDE and LLB tandem, could anticipate and react to each others' moves and it was both sound in that it covered the gaps and it allowed for big plays because they messed with opponents blocking schemes.
Injuries mounted in 1980 but Jimmy still had a pick-six and was still solid in all aspects. He rebounded healthily in 1981 with 101 tackles and four forced fumbles, though the Ram 4-3 defense had seen its best days by then.
1982 was a disaster with Jimmy having to move to MLB late in the year due to injures and got injured himself and that all led to the regime change in Los Angeles with John Robinson coming in and Fritz Shurmur changing the Rams defensive scheme to a 3-4.
From 1976-81, his peak if you will, he picked off 14 passes and defensed 62 more showing his forte—good coverage for a linebacker. Oh, he was good versus the run, that was a given, though. What he showed in the NFL is he could convert from the middle type guy who ran mostly forward in college to a guy who could drop into a zone or cover a running back in man coverage.
Youngblood opened 1983 as an inside linebacker in the Rams new 3-4 defense but quickly lost his job to Jim Collins. Collins was now (after two seasons of injuries) healthy and ready to excel, which he did.
In 1984 Youngblood was cut and the Redskins signed him as a backup but he was cut in midseason and late in the year the Rams re-signed him as a backup and that ended his career. 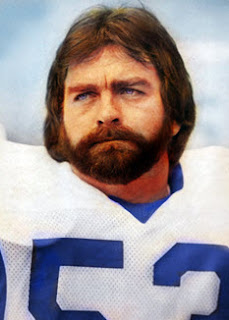 Jimmy Youngblood was yet another solid player who may not even qualify for the PFRA Hall of Very Good (though he might someday) but he was a pro's pro who scored four defensive touchdowns and could be counted on to do several things. He was, as the draft previews said, "A big linebacker who can run".
Posted by John Turney at 5:28 PM