By John Turney
There is not much to say about the Bengals new uniforms other than they look tons better than the 2004-2020 Reebok-designed kits. The new ones are similar to the 1981 set but with additional combinations and the striping is cleaner (with fewer stripes on the sleeves).
There is some "Nike nonsense" but nothing like the Fibonacci stuff were endured or the explanations that went alongside the cruddy Browns or Jaguars uniforms back in the day.
Here it's seemingly limited to the font of the numerals looking like tiger "claw marks" or some such stuff. 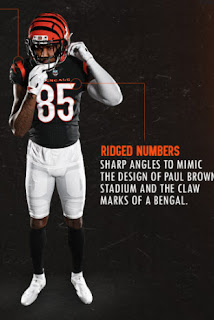 Here are shots from the 2004 unveiling:

Here are the new uniforms 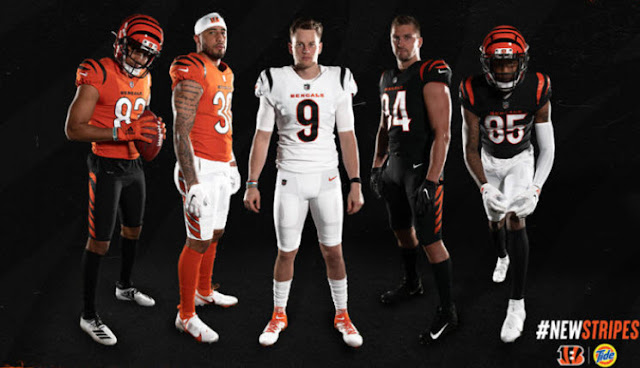 With a couple of notable, awful exceptions (Rams and Falcons) many of these new uniform sets are a return to classic designs with some modern tweaks. This includes the Chargers, Browns, Buccaneers (back to Pewter Power), the Colts (serifs on numerals), and even the Jaguars who should have gone even more tradition but did go back to what Tom Coughlin wanted—a clean, classic look rather than the 2013 Nike garbage they were wearing. Additionally, Dallas went with a blue/silver color for their pants rather than the so-called "seafoam green" they wore for years. So there is a trend to tradition.
Teams are learning that fans want good-looking uniforms that are dignified and are neither gimmicky nor clownish. The Rams didn't get that message last year but the Bengals did and their uniforms are the better for it.
Well done, Bengals.
Posted by John Turney at 9:30 AM