Tom Jackson—Yet Another Underrated Linebacker of His Era 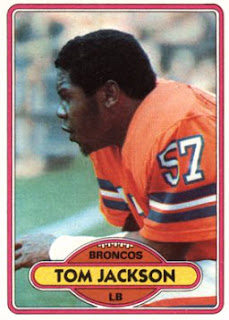 The first person to name Tom Jackson was Paul Zimmerman who picked him for his New York Post team in 1976. He called him a "sawed-off Butkus".  It was a tremendous year for Jackson, he had 76 tackles, but picked off 7 passes, a very high number for a linebacker, and throw in his 4 sacks and 11 passes defensed other than the picks.
That year was Jackson's first as a weakside linebacker in a 3-4 defense. Prior to that, he was on the strong side in a 4-3 (and a bit as an inside linebacker in 1974 when Denver played some 3-4 schemes) and the new spot was ideal for him.
No, he wasn't a big man at 5-11, 220, but he was someone who could run, around a 4.5-4.6 forty according to published reports and it looked like he played faster than that. In his era 'backers didn't rush all the time like they did at the end of his career when players like Lawrence Taylor or Rickey Jackson or Andre Tippett and others were racking up double-digits in sacks.
Jackson was an all-around guy in Joe Collier's scheme. Play the run both when it comes at you and chase when it goes away from you, drop into your zone, or carry a running back in man coverage and yes, sometimes rush the passer, even sometimes with your hand in the Mile High Stadium Dirt. And most of all, deliver a blow when you get to your target. Jackson did all of that.
If you read Denver paper clippings in 1974 and 1975 they are seemingly full of Jackson mentions, big plays or even near-big plays and certainly the Broncos team highlight films show the same things. He was just one of those players you notice when watching a defense.
After his 1976 season the Broncos defense got even better and became known as the Orange Crush and for a decade was one of the better defenses, year-in and year-out in the NFL and Jackson help up his part.
In 1977 Jackson was All-Pro and was Second-team All-Pro the next two seasons (going to the Pro Bowl in all three) and in 1984 he was All-AFC giving his four seasons with post-season honors. But really, his 1980-83 seasons, when he didn't get honored, were not substantially different than 1976-79 and 1984 when he did. He was that steady—he made big plays in all of them and additionally was the emotional leader for his team.
Vocal and tough, Jackson was the spokesperson for a team that was full of quieter-type men like Randy Gradishar, Bob Swensen, Barney Chavous, Rubin Carter, Louis Wright, Bill Thompson, Joe Risso, Steve Foley, and others. Other than Lyle Alzado who left after the 1978 season, there just were not any vocal players on the Broncos besides Jackson.
But Jackson backed up his words with his play.
He was nicked in 1985 and played a reduced role in 1986, but led his defense to the Super Bowl in 1986 where they lost to the Giants but it was still a good career-capping performance for "TJ".
Certainly, more can be said about T.J., but sometimes these profiles can get repetitive "he was quick, strong for his size, etc." Maybe all that needs to be said was that he was an excellent football player, a team leader, and a good man—and an excellent broadcaster, too.
Career stats—