By John Turney
Karl Mecklenburg was a tremendous player and one of the interesting aspects of his career is he is credited with playing "all seven positions in the defensive front".

Actually, we think it was more than seven. But be that as it may, it should be noted that in the Broncos front that was nothing new for an inside (or outside, for that matter) linebacker.
In the late 1970s Joe Collier, the Broncos Defensive Coordinator deployed Randy Gradishar in a similar fashion, though not as much as Mecklenburg. And to be accurate, though Mecklenburg did play all those positions his primary position was inside linebacker in base and defensive end in nickel.
Similarly, Gradishar's position was inside linebacker, and since his forte was pass coverage in passing situations he stayed as a linebacker in those defenses rather than rushing the passer, which was Mecklenburg's strong suit.

So, with that background, here at some screenshots of the various techniques Gradishar lined up at—which totals seven. 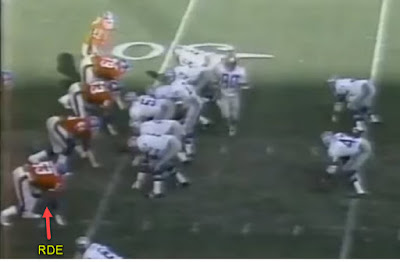 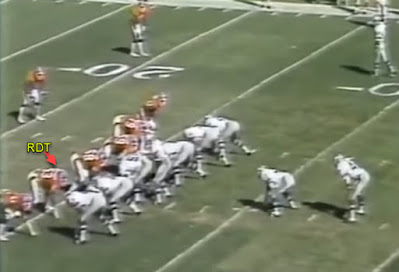 Again, to be clear, this simply shows the Broncos scheme, under Joe Collier, required versatile linebackers, and that included Tom Jackson, Joe Rizzo, and Bob Swenson, though none of them lineup in as many techniques as Gradishar.
So, when Collier got his new toy, Karl Mecklenburg, in 1983 he simply expanded what had been done before but is was not really anything new.
Posted by John Turney at 9:50 PM