In 1967 Les Josephson wore two different numerals in the same game. In 1980 Dave Preston, running back for the Broncos did the same thing as Josephson.

Jenson's jersey was "ripped up" according to Dick Enberg and Preston was given a replacement jersey with a different number.

Shots from early in the game and later in the same game, early in November 1980—

One oddity—Merlin Olsen was at both games, playing for the Rams in 1967 and covering the game for NBC in 1980. We are not suggesting these are the only games this has happened, we know of one other (Rich Saul, 1972—Olsen played in that game, too) but it is kind of a cool footnote. 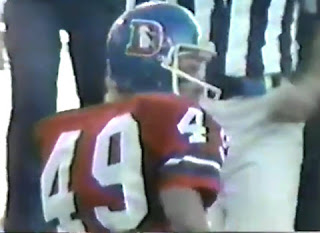