We know, we know. Draft grades mean little. A draft cannot be evaluated for years. And player comparisons rarely work out—players are too different.

But we are going to do it anyway. But we will limit the Rams draft to former Rams draftees to narrow the field and make it more interesting. Certainly, it's not perfect, but it's a fun exercise.

See what you think.

Former Ram comparable
Tavon Austin is the obvious one. Rams traded up to get Austin in 2013 and he added a lot of pop in the punt return game he also has a lot, seemingly, called back. But he never was the factor on offense his speed, quickness, and skill set promised.
Atwell is smaller, but has the same skill sets but did run deeper routes in school.
Seems like an odd choice for the #57 overall. Atwell says he's up to 160 pounds but does not look 5-9. He's a definite smurf.

Former Ram comparable
It was hard to find a comparison in Rams draft annals. Fred Strickland out of Purdue was a second-round pick who was about Jones' size when he was drafted but Strickland had a much bigger frame and was able to add 10-15 pounds to his frame. He also looked like he ran a bit better than Jones, based on film study.
Strickland also had pass-rush skills and strength that allowed him to be featured in the Rams 5-linebacker gimmick defenses the Eagle/Hawk and 5-LBer nickel as a nose tackle and defensive tackle. Jones cannot do that.
Other than that perhaps Jim Collins is a fair comp. Collins was smaller (as were most inside linebackers of that era and was taken higher—second-round) but maybe similar in talent, but Collins was a good cover linebacker in zone as well as a solid run stuffer. Jones may be able to do that, but it has not been his forte.
Perhaps the best Rams comp is Micah Kiser the man he will compete with for the starting ILBer position.

Former Ram comparable
Phil Murphy was a 3rd round pick in 1980. He was 6-5, 290 (listed) but was well over 300 pounds. He shot up Rams board after good college All-Star game performances. He was large and had good movement. Rams played a 4-3 then so all he played was defensive tackle.
Brown will likely play 5/4i tech and can play the shade (1-tech) which he did in college but Sebastian Joseph Day and Greg Gaines will split snaps there for the most part.
If the Rams are lucky Brown can be as productive as Ryan Pickett who did some good work as a shade tackle for the Rams but let him go to the packers where he played some 5/4i tack as well. Not flashy, good base, solid all-around was Grease Pickett.
Brown has better pass-rush skills than Grease, however.  If the Rams have shouted right he can be the permanent replacement for Michael Brockers who was a top-run defender and a decent interior rusher who played the "spy" role in the Rams rush—watching for draws and so forth.  However, we cannot really compare Brown to Pickett and Brockers since they were first-round picks—we are trying to match similar rounds if we can along with skill sets and size and speed and strength and so on.
A good pick.

Former Ram comparable
Brandon McGee. McGee was a corner who had a lot of the physical qualities that Rochell has in terms of measurables. Speed (4.40), vertical leap and broad jump (9'11"), and the 3-cone, etc.
Jonathan Wade was a third-round pick in 2007 and he was another corner who was kind of similar in size and in the so-called "measurables (4.36 forty, 40.5 vert, 10'6" broad).
Another comparable might be Jacoby Shepard who was taken in the second-round in 2000. He was taken higher than Rochell and is about an inch or so taller so that is a fair comparison. Shepard had excellent, but not freakish measurables, maybe a 4.5 in the forty and a ten-foot broad versus the 11 feet Rochell did. However, another fair comparison is that Shepard was taken as high as he was largely based on his measurables, and at the time his private workouts really impressed Rams scouts but his play did not impress the coaches in his stint with the Rams.
Rochell is listed at 6-0½, 193, and timed as a 4.4 forty, and had an 11-foot broad jump and a 43-inch vertical jump. He was very high on the measurable scale. Rochell does exceed Shepard, McGee, and Wade but they were all excellent athletes and take in the middle rounds (except for Shepard who was likely overdrafted) like Rochell.

Former Ram comparable
Rams have drafted a couple of tight end wide receiver hybrids with great athletic ability and limited college playing time and/or success—Fendi Onobun and Lovell Pickney. Both failed.
Harris is 6-5, 220, which is smaller than Obobun and Pickney who were both 20 or so pounds heavier, Onobun was raw, as is harris. Pickney was someone who played but he was a big guy who Rams thought, at the time, who could be a TE/WR.

Former Ram comparables
Too many to name. Rams have spent a lot of mid-round picks for average college players with average size, speed, and strength but maybe had one physical trait that made them special.
Brown is 6-4, 270, runs a 5.0 forty did 25 reps, all decent but was not very productive in college (7 career sacks and 18.5 TFL in 40 games).
Reggie Doss was a 7th round pick in 1978—he was 6-4, 267, but didn't have speed (5.2) but turned out to be a fair 4-3 defensive end and a good 3-4 defensive end when Rams went to that scheme.
Doug Barnett, a 1982 fifth-rounder had some speed (4.9) and strength and some wiggle, but was backing up Jack Youngblood and didn't get many reps. He blew out a knee in 1983 and his career was over.
Doug Reed was a 6-4, 255 or so defensive end who ran a 4.8 but quickly put on weight and was, like Doss, a fairly good 3-4 end. Hal Stephens, another like Reed and Doss, but hurt his knee and was never able to play get much done in NFL. All three of those were kind of similar, though smaller (as was almost everyone in that era), and had Stephens been healthy he might have been similar to Doss and Reed and we think Barnett would have been fairly similar as well.
Victor Adeyanju. Also a fair comparison to Brown IV in terms of size and speed. A fourth-round pick was a hard worker but was able to play in a 4-3 scheme, whereas Brown will have to play a 5tech/4i if he starts and if he can play to his potential will be a tackle in nickel situations. Even though the Rams play a one-gap 3-4 scheme (really a 33 nickel), 270 pounds is on the small side. Would need to put on 15-25 pounds to really hold up as a base player.
John Franklin-Myers may be the best comparable to Brown IV. He was a 4th round pick by the Rams in 2018 and showed potential until he was felled by an injury. Was beaten out by Morgan Fox and the Jets picked him up and in 2020 showed well as a nickel interior rusher. But, remember, Franklin-Myers was more athletic than Brown IV, a bit fast (4.8 and larger 288 pounds) but played at a smaller school (Stephen F. Austin). 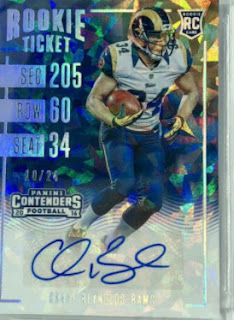 Chase Reynolds and Jim Jodat
If the Rams are fortunate Funk can be as good as Reynolds or Jodat on special teams. Funk is faster than Reynolds but not as big as Jodat was.

Former Ram comparable
We really struggled to find one.  Skowronek is a 6-2, 225, 4.6ish WR/TE hyrbid so we had to look deep. He is a big WR but maybe the best comps we can find are smaller tight ends the Rams have drafted like Kerry Locklin, though  Skowronek runs better.
UDFA in the 1971 draft Matt Maslowski who was 6-3, 210, big for that era,  is a fair comp, too, though he was not drafted. He was a solid special teams player and could run well. In spirit Rams second-round Chuck Scott was comparable but he was about 205 pounds when he finally put on Ram uniform. He had been very productive in college and the Rams felt he'd be the "big, sure-handed" receiver to match with the speedsters that had on the roster at the time.

Former Ram comparable
Pass rushers Jason Chorak, Bronzell Miller, George Bethune are all similar in size, speed and all seventh-rounder picks.
Garrett played at a small school and is 6-4, 241 and runs a 4.8 forty. In 1998 the Rams took Jason Chorak in the 7th round. He was a hybrid DE/OLber type kind of a 'tweener at 6-4, 255 pounds and ran a 4.8-4.9 or so. Not quite big enough for end in a 4-3 es and not quick enough to play outside linebacker.
In 1995 the Rams took Bronzell Miller in the seventh round who was 6-4, 245 and ran a 4.7, and six years before that they drafted George Bethine who was 6-4, 238 and also ran a 4-7-4.8 forty but Miller and Bethune played for bigger schools but none had NFL careers that amounted to much.
Chris Garrett's NFL odds are no better than these three in our view.

None of these players are going to be Pro Bowl players. Atwell has a shot to be a good returner and if Rams get very lucky they have a smaller version of Tyler Lockett and if they are super lucky have a Desean Jackson clone. But those odds are low.
Ernest Jones has a shot to be a rookie starter, there is an open competition position at inside linebacker because Kiser has been hurt, but also, when the Rams do use a base defense they do play two inside/off-the-ball linebackers, so it's possible that both Kiser and Jones on the field at the same time...if Jones can play the pass better when teams throw from their base offenses.
Bobby Brown is enthusiastic, motivated, and has a "size and movement combination" that is rare. Though he was a shade tackle in college, his body type screams that he will be Brockers' replacement at defensive end.
The corner/safety Rochell will make the team and should get snaps, he's a physical skill upgrade over David Long (who got some snaps last year) so if he grasps the scheme he should be a keeper.
Harris, Skowronek, and Funk have value as special teamers, but the odds are low for all three that they will be contributors on offense. The NFL is so talent-ladened that these kinds of guys who not be special. Players with their skill sets have been seen before and we've seen the results.
Garrett will have to really shine to get a job as a potential edge rusher. Rams ran through quite a few guys with much greater talent and they are gone (Polite to name one) so it's had to think this kid can do much.
Finally, Earnest Brown IV is interesting. He's solid but is always going to be limited (see our Rams comparables above) but he can be a role player, most likely as a tackle in nickel situations. But he seems like he lacks quickness, NFL quickness, to be great. Decent to Good? Perhaps. Rams are hoping he can do well in Morgan Fox's role, we think.
In three years we will know for sure but this was not a draft that added any stars and didn't add any offensive linemen. (Rams have taken seven offensive linemen in the last six drafts and that includes the pick they sent to the Browns to acquire Corbett).
So, if they are short some offensive linemen in 2022, 2023, and so on, this will be the draft analysts look at because it was purported to be a draft deep in offensive linemen.
We'll check in on this topic in 2023.
Posted by John Turney at 9:09 PM