Charles Woodson is a tremendous player and among his achievements in 2014 was recording his 20th career sack which, coupled with his over 50 interceptions, makes him the only official 50/20 man.

However, since the official sack  began in 1982 it is interesting to look back and celebrate the first man to amass those totals, albeit unofficially. 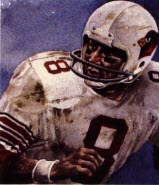 While it's probable that Larry Wilson was not the first safety to blitz and tackle a quarterback for a loss while attempting to pass (a sack) he's often cited as the one who popularized it.  Wilson has certainly seen his teammate Jerry Norton take  the quarterback in 1960 when Wilson was a rookie.

Officially, Wilson has 52 interceptions, but no sacks. However, by reviewing the St. Louis Cardinals Game Summaries (Play-by-plays or PBP) we find that Wilson was very successful in getting to the quarterback, which he did at least 21 times in his career with a career-high of five in 1962.

There are some sacks in the PBPs which do not record a specific tackler of the quarterback, and film (if it exists) would have to be reviewed to fill in some gaps, so it is possible, even likely that Wilson has a few, or even a handful, more during his career. Nonetheless, Woodson had it may be a bit tougher, spending most of his career as a cornerback rather than safety and he deserves much praise for his accomplishment. But, so , does Wilson. For what it is worth, Woodson has 60 interceptions, so he's the only 60/20 man in NFL history.

The sack research has not uncovered any other defensive back that would qualify. So, Wilson and Woodson, the W&W of picks and sacks, the only two 50/20 men in NFL history.
Posted by John Turney at 7:48 PM