Things You Can Never Lay Your Hands On-Sacks

Again, as part of Pro Football Journal's ongoing series of "Things You Can Never Lay Your Hands On" (whose title is an homage to the great book Pro Football Chronicles) we have put together an inclusive list of information that began appearing in the NFL Record and Fact Book in the late-1980s. In those volumes the editors of that book would compile leaders in various categories over 3-, 5- and 10-year intervals which very helpful to the reader. However, to get complete lists one had to have all the volumes and in that took time to piece it together so to help that we've taken the concept to the beginning and have complied it into one place. The following is a list of teams who had the most sacks in the three-year periods since sacks became an official team statistic in 1963 with commentary. 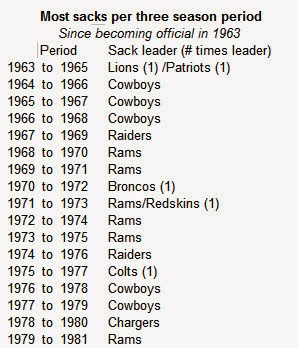 The Lions and Patriots led in the first interval, 1963-65. Neither team has a Hall of Famer, though Alex Karras should be considered with his four-time First-team All-Pro, five-time Second-team All-Pro and over 100 sack career. Roger Brown got to the QB as often, if not more, than Karras and later contributed to the Ram Fearsome Foursome.  The Patriots of that era had their own foursome of fearsome pass rushers: tackles Houston Antwine and Jim "Earthquake Hunt" and end Larry Eisenhauer and Bob Dee, all of whom received AFL post-season honors in their careers.

Mid-season 1963 is when Tom Landry moved Hall of Famer Bob Lilly to right defensive tackle from left defensive end and that moved ignited the effectiveness of Landry's Flex Defense. The Cowboys out-paced the Rams Fearsome Foursome in sacks while that Dallas defense became known as "Doomsday". Lilly, George Andre, and others led the charge as they led pro football in sacks for three consecutive three-year periods.

The 1967 Raiders set a then-record of 67 sacks, and the foursome of Ike Lassiter, Ben Davidson, Tom Keating and Dan Birdwell continued to get after the quarterback in 1968 and 1969 as well.

The Fearsome Foursome of Deacon Jones, Merlin Olsen, Lamar Lundy and Roger Brown with some help from Coy Bacon took the crown through 1971. The Rich Jackson, Paul Smith and Lyle Alzado-led the Broncos surge from 1970-72.

The Rams were the leader through the 1975 interval, with Jack Youngblood, Fred Dryer, Larry Brooks and Fearsome Foursome holdover Merlin Olsen. The 1971-73 Redskins tied the Rams with Diron Talbert (former Ram), (former Jet) Verlon Biggs, (former Bill) Ron McDole and designated rushers Jimmie Jones and Bill Brundige. In an oddity one sack the Rams had in 1971 Roger Staubach was mis-scored a run. If properly scored the Rams would have led from 1971-73 by one, but as it stands officially, the George Allen-Redskins tied the team he formerly coached.

The 1974-76 Raiders may come as a surprise, beating out the Rams, Vikings, and even the Steel Curtain Steelers. With less-than-household names the Raiders put a lot of heat on enemy quarterbacks with Tony Cline, Horace Jones, Otis Sistrunk, Art Thoms. The final year, 1976, the Raiders switched to a 3-4  defense with injuries to their ends and with Ted Hendricks and John Matuszak they still got to the quarterback often enough to lead for that

Doomsday II with Harvey Martin, Randy White, Ed "Too Tall" Jones and Jethro Pugh took the next two titles followed by the 1978-80 San Diego Chargers. Hall of Famer Fred Dean handled the outside with LeRoy "Too Much" Jones while Gary "Big Hands" Johnson pushed inside, with Louis Kelcher 9who had bigger hands than Johnson).

Next up were the Los Angeles Rams once more and, again, was led by Hall of Famer J Youngblood, Dryer, Brooks, this time with Mike Fanning and Cody "Hold Your Bones" Jones Merlin Olsen's left tackle position. 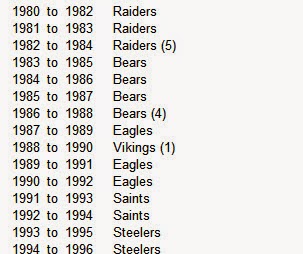 The Raiders ran a 3-4 scheme in the 1980s, but on passing downs went to a 4-man line. Cedrick Hardman led the Raiders in sacks in 1980 after being acquired from the 49ers where he had put in a decade of work, then they traded for Lyle Alzado in 1982 who was a grizzled vet ready for a comeback. Along with draftees like Howie Long, Greg Townsend, Bill Pickell the Raiders the Raiders nickel-set was the best in the NFL.

Buddy Ryan's famed 46 defense took charge and was the best in the NFL in the mid-1980s. Hall of Famers Richard Dent and Dan Hampton were a great inside-out tandem who got plenty of help with lots of blitzing by Otis Wilson and good rush ability from tackle Steve McMichael.

The Buddy Ryan-led Eagles wrestled this crown from the Bears for a season, but lost it to the Vikings who had their own magnificent foursome of Hall of Famer Chris Doleman, All-Pro Keith Millard, solid Henry Thomas and Al Noga. However the Eagles regained the lead in this category with monsters like Reggie White, Clyde Simmons, Jerome Brown.

Hall of Famer Rickey Jackson and All-Pro Pat Swilling led the Saints in the early 1990s. And the Steelers followed with their first appearance on this particular list with the original Blitzburgh Defense. In 1993 the Steelers signed free agent Kevin Greene and matched him with Greg Lloyd and Chad Brown to pace the league in sacks. 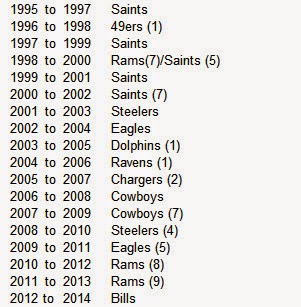 Joe Johnson and Wayne Martin were the leading  on the now-4-3 scheme of the Saints. In 1998 they added L'Roi Glover and then Darren Howard as this group quietly mounted the NFL's most consistent rush over a six-year period. Only the 1996-1998 49ers (who added Chris Doleman and Kevin Greene to their rush) and the 1998-00 Rams broke up their string. The Rams underrated defense had All-pro Kevin Carter at left end, D'Marco Farr as the three- and Grant Wistrom as the  rusher that tied the Saints in sacks for those three seasons.

Joey Porter and Jason Gilder were the leading  for the 2001-03 Steelers. Jim Johnson's Eagles defense, without a lot of stars blitzed from all over and took the 2002-2004 crown. Jason Taylor was the main man for the 2003-05 Dolphins. Rex Ryan's group, paced by Terrell Suggs and Adalius Thomas, led next.

The two "Seans" Merriman and Phillips (spelled Shawne and Shaun respectively) led Wade Phillips' pass rush from 2005-2007. Phillips went on to be defensive coordinator in Dallas and with DeMarcus Ware as the kingpin with help from Greg Ellis and others became the crown bearer through 2009.

Next up were the Rams with Chris Long, Robert Quinn, with nickel rushers William Hayes and Eugene Sims leading the way in sacks. The 2012-2014 Bills edged the Rams, but with Mario Williams, Kyle Williams, Marcell Dareus and Jerry Hughes the Bills earned the leadership as the most consistent rush over the past three seasons.
Posted by John Turney at 10:42 AM