Ron Rivera and the Player He Replaced: Otis Wilson

Sports Illustrated described why this way. In part, it reads, "With 1:20 to go and the score tied at 17-17, Bears Kicker Randy Pratt made a 22-yard field goal, but he was roughed on the play. Defying common wisdom, Cal Coach Joe Kapp elected to take the penalty—and the three points off the board—and go for the TD. On the next play, with the ball on the Aggie two-yard line, Quarterback Gale Gilbert fumbled the snap. A&M recovered, but two plays later Hawkins, sweeping to his right, was trapped by Rivera in the end zone. Said Kapp, "No question, Ron saved my butt."

Ron Rivera was a fabulous high school player and Everybody's All-American in 1983 at the University of California. As a senior, he was allowed to freelance, line up wherever he thought he could impact the upcoming play.   Rich Brooks was quoted as saying, "They let him go wherever he  do whatever he wants and let him whip the hell out of whomever he wants"

He was seen  a good all-around linebacker who has special skills as a pass rusher. He was 6-3, 225 pounds with 4.7 speed and was said to have "deceptive speed", meaning he played faster than his time. It was enough for him to be drafted in the 2nd round of the 1984 NFL Draft. In the First Bears selected Wilbur Marshall, a dominant college player out of Florida. It couldn't have been a good omen for Otis Wilson, the Bears left linebacker.
With those two picks secured, when Falcon tight end Junior Miller was holding out, the Bears offered Wilson even-up for Miller. The Falcons declined.

Wilson had been a slow starter for the Bears, a First round pick in the 1980 NFL Draft. Wilson was listed at 6-2, 224 pounds and had a published 40-yard time of 4.6. He was another "everybody's All-American" at Louisville in 1979. But, he found himself in the midst of Buddy Ryan perfecting his 46 defense and at times during his first four years he flashed, but also frustrated Ryan and Bear Head Coach Mike Ditka. The additions of Marshall and Rivera had to be a signal to Wilson.

In 1984 he began to show his potential and was consistently making plays, adding in his bravado (predicting a Patriots shutout in Super Bowl XX). Wilson, in the 46 would line up on the strong side, far outside the tight end with Richard Dent on the opposite side. In the base defense, he was the left outside linebacker.

From 1984-87 he averaged 9 sacks a year (counting 1987 as a half-season) as the bookend to Richard Dent. However, it is an interesting note that Wilson did that while not being on the field when the Bears were in their nickel defense, in likely passing situations. and Marshall were the two linebackers in that package.

Of course, this was the NFL of the 1980s, not the 2010s where anywhere from 40% to 67% of the time defenses are in nickel or dime packages. In the was less common. And with the Bears probably less common than with other teams. In 1984-85 Sporting News reported that the Bears were in the 46 defense around 40% of the time. After Ryan left it was said that percentage dropped to about half of that, perhaps around 20%. So, it seems sure that in 1984-85, at least, they were not in the nickel that much and Wilson didn't miss too many snaps, but in 1986-87 he likely missed more as the Bears focused more on the nickel in passing situations.

Rivera, in the mean time was playing special teams and filling in where called upon. In 1986 he got the call to start his first two games, filling in for Mike Singeltary and did a good job, recording 11 tackles in his first start and eight in his second. He also would fill in on special packages Ryan the fourth linebacker in their 4-4 and also in the 3-4 (yes, they did use it occasionally) and in a 1985 Monday Night Game against the Vikings, Rivera got his first forced fumble of his career and his first piece of a sack in that 3-4 package.


However, he didn't get his first real playing time until 1987 when Wilson was injured and Rivera showed well. In the six games he got almost all the snaps (including 5 starts) he recorded 30 tackles, 5 of them for losses, picked off two passes and got a sack.

It is no wonder when Wilson, in August of 1988, tore up his knee, that Rivera got the call to step in. The next two seasons, 1988-89 Rivera was solid but nothing spectacular. He was what could be called "just a guy", making a few players, but not what the Bears wanted from their SAM backer and he was replaced by John Roper who was more in the mold of Wilson.

Meanwhile, the Bears left Wilson unprotected in Plan B free agency and the Los Angeles Raiders signed him. In a short bit in Los Angeles, Wilson was signed, cut, resigned for less money, started one game and then cut again, for good this time. Raider Head Coach Mike Shanahan wasn't ready to blame the injury, but suggested that Wilson was not 100%, but the bottom line was, "Otis wasn't making the plays he needs to make". And that ended Wilson's career.

have been interesting to see how Wilson may have fared in the Raiders 3-4 defense (where Wilson was penciled in as the LOLB) that relied heavily on sub packages, which they called "bandit" (), "renegade" (dime) and "desperado" (7 ) with Howie Long moving to DT and Greg Townsend at one end and Wilson the other. Would have been fun.

Wilson seemed custom-made for the 3-4 and was one of the few OLBers that never really got to play it. Of course, he had a more unique experience with the 46 and had tremendous success.

Here are some screenshots of Wilson in man coverage on TE Clint Didier in 1985 when were using a 4-4-3 defense against the Redskins. 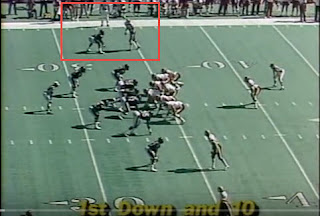 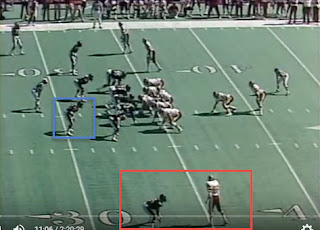 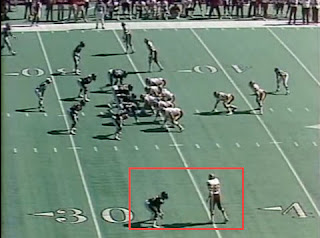 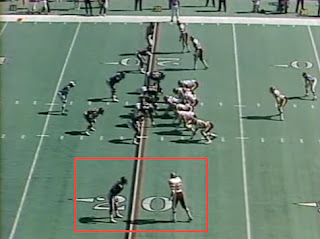 However, it begs the question, if he can get 9 sacks a year  the base 4-3 and 46  then what might he have done if he played the 3-4 in base and DE in a 40 nickel like an Andre Tippett did or a Von Miller does today? Wilson certainly shared some physical attributes with the  of the day and of today. He even line up as a defensive lineman on a few occasions in 1985.
As for Rivera, he ended his career as a backup for the Bears, as special teams, but his career never really reaching the levels he was drafted for. However, the various defenses he played in surely prepared him for his next career: coaching.

Rivera had a stint in the media, then in 1997 he got into NFL coaching. He learned under the Jim Johnson-scheme in Philadelphia, and then was the Bears defensive coordinator under Lovie Smith where he became expert in the Tampa-2 scheme. He moved on to the Chargers and learned the ins- and outs of Ted Cotrell's 3-4 defense before becoming the coordinator there. Next stop was Carolina, then the playoffs, now the Super Bowl.

Career summaries for both: