Shortly after the 1961 NFL Championship Game in which the Packers routed  New York Giants 37-0, United Press International sportswriter Henry McLemore interviewed Vince Lombardi and asked him to name his top eleven offensive and defensive players. It wasn't an All-Pro team, more of the "best in the business" list of those Lombardi had faced in his NFL coaching career. This is evident  a few of his names had already retired by the time the team was chosen.

Pro Football Journal, always in search of the esoteric found this interesting  as we did on this: Mel Hein's All-Time NFL Team. 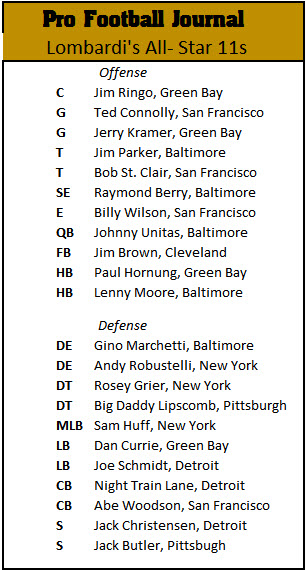 Update:  Jim Patton of the Giants for Jack Butler. See details below.

The original article:
Of note is the inclusion of Billy Wilson, a fine receiver who led the NFL is receptions three times in the 1950s and also led the entire NFL in receptions for the Decade of the 1950s and was also a two-time All-Pro.

I am nearly certain that the right safety listed in the article is Hall of Famer Jack Butler rather than the "Jim Parker" it lists and an adjustment was made to the PFJ chart.

Update: Cliff Christl, writer and team historian for the Green Bay Packers e-mailed me and he is reasonably certain that Lombardi likely would have chosen Jim Patton as one of his safeties rather than Jack Butler. The original article mistakenly lists "Jim Parker" and I will accept Mr.  view that Lombardi meant Jim Patton.


Ted Connolly is interesting in that he made his first Pro Bowl after the 1961 season and may have been "up-and-coming" type of pick. I would love to see the 1961 game film of the Packers versus the 49ers in that year to see what made such an impression in Lombardi's mind.

And as can be seen, Joe Schmidt is listed as a right linebacker, even though he had been a middle linebacker for at least six or seven years 1961. It shows that even an expert like Lombardi will fill out an All-pro ballot in an odd way. ( Khalil Mack as OLB/DE in 2015)

If memory serves Lombardi may have chosen another "All-time team" in his later years, and if I can lay my hands on it, I will republish it as well, to see if there are differences.
Posted by John Turney at 7:05 PM