The Pittsburgh Steeler pass offense of 1952 installed by Gus Dorais and Head Coach Joe Bach remained during Ted Marchibroda's rookie campaign of 1953. After serving our country in 1954, he returned to continue his apprenticeship behind Jim Finks in 1955. passing records were broken in the game against the Lions that season, and Marchibroda contributed to the Black & that afternoon.

was the full-time starter in 1956 but with the hiring of Buddy Parker for the 1957 campaign, he was traded to the Cardinals for his final season as a player. His last touchdown pass was thrown to future Hall of Fame running back Ollie Matson (this is a precursor of things to come). Ted's first year as a coach came in our Nation's capital in 1961 when former teammate Bill McPeak hired him to teach/tutor rookie quarterback Norm Snead. Winning their final game that year saved the 'Skins from going . A 1-12-1 record is not the way to start a coaching career, but with the acquisition of Bobby Mitchell and Snead's improvement the 'Skins were very half of the 1962 campaign.

When Sonny Jurgensen was brought in he was acquired for Snead) the Washington passing attack reached new heights. One of the most impressive victories in 1964 was the victory over the defending league champion Bears and defensive co-ordinator George Allen.

Finally getting his opportunity to become a head coach; Allen needed an offensive co-ordinator he could have complete trust/faith in, and who could teach a talent like Roman Gabriel to elevate his game. Los Angeles, in the three seasons before the arrival of Allen & Marchibroda, had lost 28 of 42 games, but in their first three years together they lost only 11 of 42.

Running back Tom Moore joined the Rams in 1966 and established a new record for receptions for a running back in a season with 60. innovative use of Moore allowed Moore's gaudy number of receptions and was a hallmark of Marchibroda's innovations that were followed by the Bill Walsh and others in the use of running backs in the passing game.

Another example of Marchibroda's approach was during his time with the Rams, Gabriel had a 76.0 rating in when pro football's was 63.8 and only 3.3 % of Gabe's passes off when football-wide the average over that 5-year span was 5.4%.

belief in a balanced, mistake-free offense, combined elements seen today. The use of wing alignments with a single back, and split backs gave the quarterback the option of throwing short to the back out of the backfield, intermediate and deep to wide receivers and tight ends got the Rams off and winging as they won their first 11 games to join the above mentioned group. Minnesota also joined the group as they won 12 straight that season, and beat Los Angeles in a legendary playoff battle at the Met. The Rams under the guidance of Allen & Marchibroda had achieved success in the regular season, but had tasted playoff defeat on the road in the frigid Midwest in 1967 and 1969.

Allen brought Ted with him to Washington in 1971 and the "Over the Hill Gang" was the talk of the league as the 'Skins fought their way into the playoffs. Ted Marchibroda again got a chance to work with future Hall of Famer Sonny Jurgensen, yet it was his work with retread Billy Kilmer that received rave notices around the league. Again a balanced mistake free offense built around a running back (league MVP Larry Brown), and a passing attack that utilized everyone was the Marchibroda way. Though Washington won two home playoff games in 1972 the season ended in defeat in the Super Bowl to the undefeated Dolphins. Two more successful playoff seasons ensued, but at the close of 1974 it was finally time for Ted to become a head coach.

The impressive history of the Baltimore Colts had reached the bottom the close of 1974, could this rookie head coach turn them around? Starting 1-4 no one other than Ted thought the Colts would do anything during the 1975 season. Baltimore won 9 straight games to win the AFC East. Two of those division victories came over the Don Shula led Dolphins; as Marchibroda became the first coach to beat Shula twice in one season since Don had become head coach in Miami. Ted Marchibroda became the first man as both an assistant and head coach to have a win streak of at least 9 games in the regular season.

The defending Super Bowl Champion Steelers won 11 straight games during 1975 thus setting up a playoff confrontation of Marchibroda returning to Pittsburgh to try and de-throne the Steelers. The Colts lost the hard fought contest, and two more play-off failures during 1976 & 1977. The keys to the Colts success on offense was the continued improvement of league MVP Bert Jones at quarterback, and Lydell Mitchell at running back. Mitchell was very productive as a runner, yet his ability as an effective receiver out of the backfield was again a trademark of a Marchibroda offense.

The firing of Marchibroda returned him to offensive mastermind as an assistant in Chicago, Detroit, and Philadelphia. Finding a place where you "fit" as a coach is always troublesome, but Ted finally found a place where he could help resurrect an offense.......Buffalo.

Marv Levy (also a former George ) and Ted set in motion a prolific offense. mentored another Pennsylvania native in Jim Kelly; who was improving with each snap, and took the talents of Thurman Thomas to a new level. The K-gun offense was innovative.....but what else would you expect from Marchibroda. would advance to the Super Bowl in Ted's final two years there. again became the head coach of the Colts; this time in Indianapolis. Strong willed, tough, and with a powerful arm Jim Harbaugh had limited success in Chicago, but under the tutelage of Ted, Harbaugh led the Colts to within one Hail Mary pass of returning to the Super Bowl in 1995.

returned to Baltimore to become the first head coach of the Ravens. The won/loss record does not show the foundation that Ted laid in his final go 'round as a Head Coach. In closing his saga; many will state emphatically what a kind man he was. I am one of those many. My limited correspondence with him was always positive, and our talk of offensive football at the Pro Football Hall of Fame one summer was truly a highlight for me. RIP Ted, you achieved so much during your time in the league. 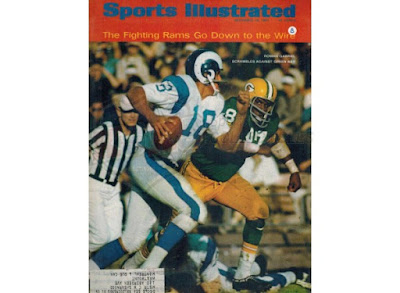 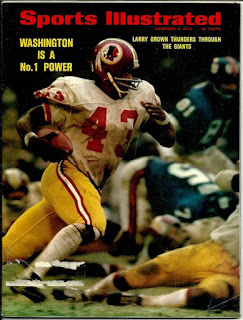 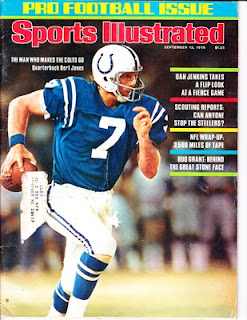 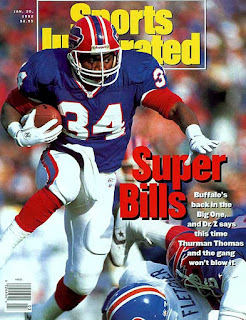 Credit for all Sports Illustrated -Ebay
Posted by Coach TJ Troup at 7:22 AM