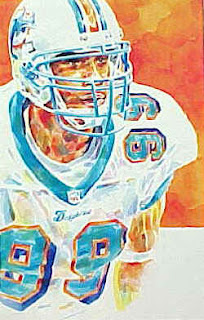 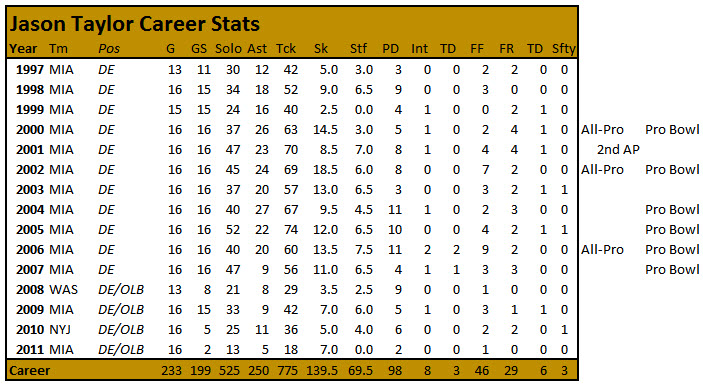 The Hype: Jason Taylor was the 2006 NFL AP Defensive Player of the Year and 2007 NFL Walter Payton Man of the Year a 2-time AFC Defensive Player of the Year, and was a Second-team All-Decade selection. In addition, he was a three-time First-team All-Pro and a six-time Pro Bowler. He had 9 defensive touchdowns and three safeties for a total of 12 defensive scores. He had 139.5 sacks, 69.5 run/pass stuffs, and 46 forced fumbles and recovered 29. As far as the "numbers" go, he ranks near the top of this year's finalists.

The Knock:  No real knocks on Taylor's career unless someone wants to make an issue of his lack of a Super Bowl ring.

The Prediction:  Taylor will eventually be elected to the Hall of Fame in our view, but not this year. We think he will advance to the Final 10, but be eliminated there. We equate his career, roughly, with others of his era, like Michael Strahan and he was not a first-ballot HOFer.
Posted by John Turney at 10:36 AM