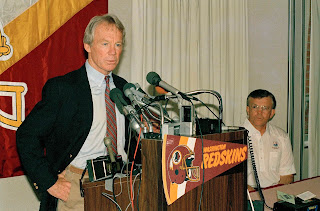 Though we would have preferred George Young, the choice of Bobby Beathard by the contributor committee of the Hall of Fame is perfectly sound and Beathard should have no problems getting the 80% of the votes of the total committee needed for induction this coming February.

Really, the only reason we preferred Young is that he was voted the NFL Executive of the Year five times to twice by Beathard. However, there is still a good chance Young could be one of the two nominees next year so we won't fret one bit.

Beathard's greatest work was with the 1980s and early 1990s Redskins teams that appeared in three Super Bowls, winning two (though plenty of his players were still with the team when they won another Super Bowl in 1991). He was named the General manager of the Redskins in 1978 and served through 1988 in that capacity.

Prior to that, he was a scout for the 1960s Chiefs and also for the Falcons from 1968-71. After that, he was named the director of player personnel for the Dolphins and he had a hand in the Dolphins championship run there.

After his time with the Redskins he became the General Manager with the San Diego Chargers where they appeared in their first Super Bowl in 1994.

The only thing we don't like is that one of the advisors (the committees always have advisors in the room when choosing contributors and senior nominees) this year was Charley Casserly. Not for nothing but that seems like a conflict of interest to us. Casserly was an assistant to Beathard in Washington for taking over the GM job when Beathard left.

Of course, Casserly didn't have a vote. He was likely asked questions and asked to explain his views on Beathard and Young and the owners and/or the officials who were on the ballot. So his influence is limited and likely the HOF officials have been in this situation before over the years, we just usually didn't know who the advisors were for the committees. However, in this situation, the optics are not good.

Via Twitter we've asked Charley Casserly about the charge of a conflict of interest, we will let you know if we get an answer.