Corners on the Hall of Fame Market

LOOKING BACK
By John Turney
Yesterday we took a look at some recent NFL safeties comparing their statistics and honors. Today we do the same with the better cornerbacks of recent decades. While not an exhaustive list we think it captures the major figures that are in the Hall of Fame and who are eligible or who will be eligible soon. 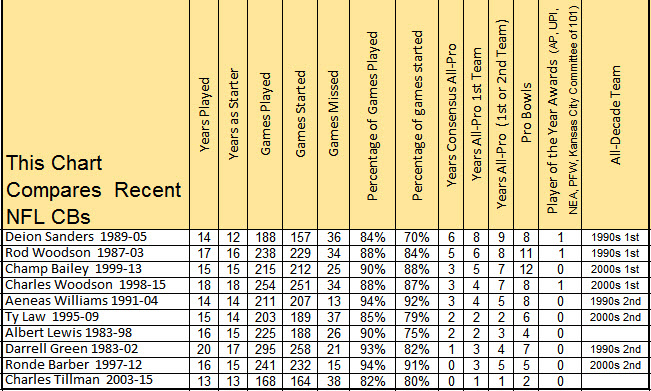 Ty Law is a personal favorite. He twice led the NFL in interceptions and was twice an All-Pro twice to go with six Pro Bowls and earned three Super Bowl rings. He didn't get as many post-season honors as some of his peers but his play was just as good in our view. In terms of man coverage, he was right up there with the best, even though the Patriots were not always in man. Belichick's scheme was using man, zone and combo coverages as complex as anyone's, in not more. 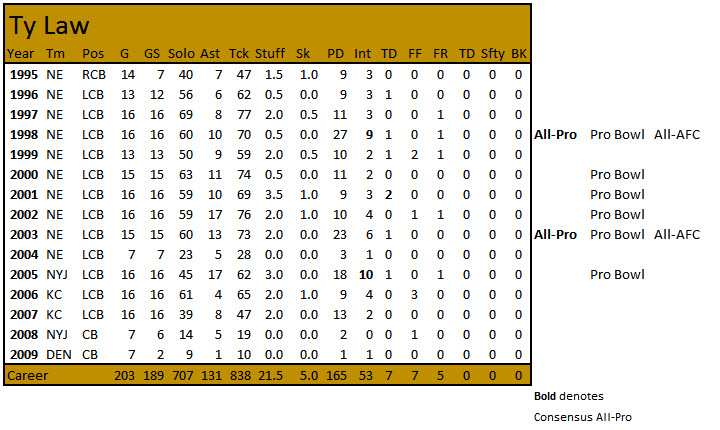 In some of the recent pass defense metrics, he always seemed to fare well, such as in the defensive passer rating against which was singling out a player and tracking pass completion percentage, yards per attempt, interception percentage and touchdown percentage as using the NFL passer rating to smooth them into a single figure. It may sound like mumbo jumbo but it is a useful stat and Law was usually very good in that department. 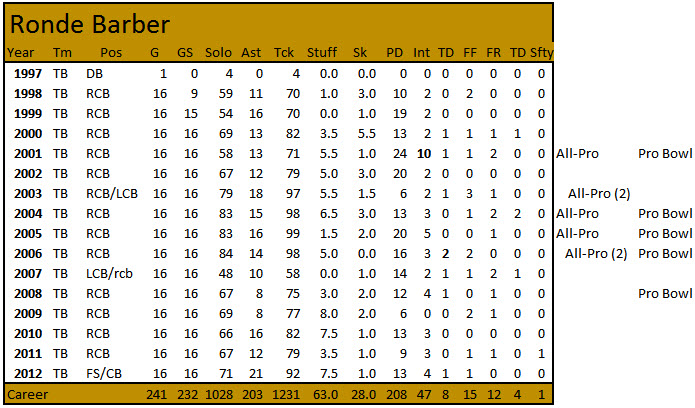 Ronde Barber is quite4 different than Ty Law. Barber spent his career in the famed Tampa-2 system, playing zone corner on the right side (except a couple of years he had to fill in on the left). He played less man coverage as a result of the scheme. It also afforded him some more opportunities to make plays on and around and behind the line of scrimmage. He had 28 sacks and 63 run/pass stuffs. Both numbers are impressive and the latter is only 0.5 behind Warren Sapp had 65.5 such plays).

He was a three-time All-Pro, though none were consensus and was voted to five Pro Bowls and led the NFL in picks in 2001 and earned a Super Bowl ring in 2002 and including playoffs scored 13 defensive touchdowns and a safety. Charles Woodson is not eligible for the HOF until 2021 but he fit in with this group so we included him. He was a four-time All-Pro (three of them consensus) and a Second-team All-Pro three more times and a nine-time Pro Bowler. He led the NFL in interceptions twice (2009 and 2011) and scored 11 touchdowns on pick sixes and two more on fumble recoveries. He ended his career as a safety like Rod Woodson did and played well there.
He has an excellent chance to be a first-ballot Hall of Famer though it is never a sure thing but Woodson we'd say has a 99% chance of being one. 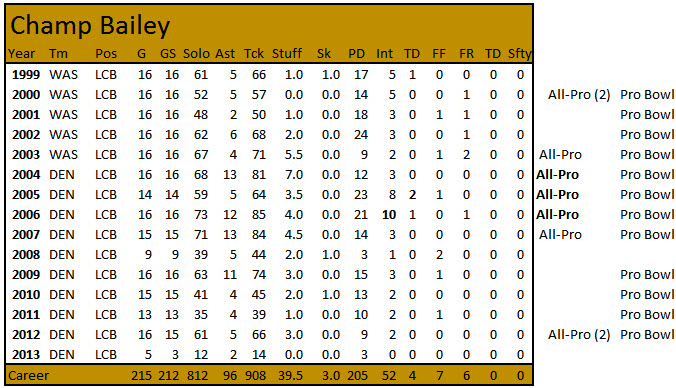 Champ Bailey was quite fun to watch. He'd set receivers up as well as anyone to go for a pick. He was a five-time All-Pro (three of them consensus) and a Second-team All-Pro twice to go with his dozen Pro Bowl selections. He led the NFL in interceptions in 2006. 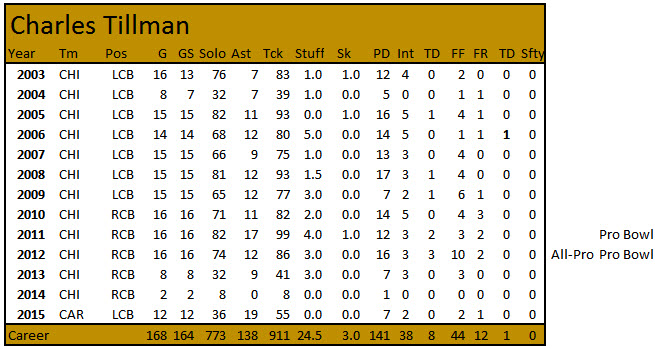 Peanut Tillman is one of T.J. Troup's favorites of the past decade and a half. His man coverage was top notch and would challenge receivers like few others would. He was only All-Pro once and a Pro Bowler twice but he really deserved more. He also could pry footballs loose from receivers totaling 44 forced fumbles including an incredible 10 in 2012. He also had nine defensive scores, eight from interceptions. 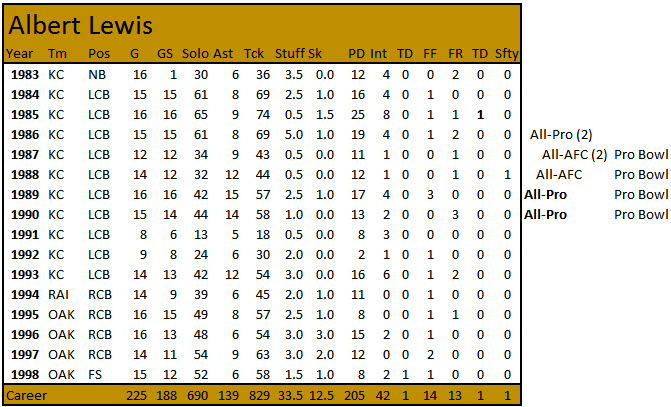 For some reason, Albert Lewis gets overlooked when looking at articles about great cornerbacks. As a rookie, he was a great nickel back and slid into the starting lineup the next year and made plays for the Chiefs over the next decade. He also is one of the great kick blockers of all time, being credited with 10 blocked punts and kicks in his career and he deflected two others and tackled a punter once. 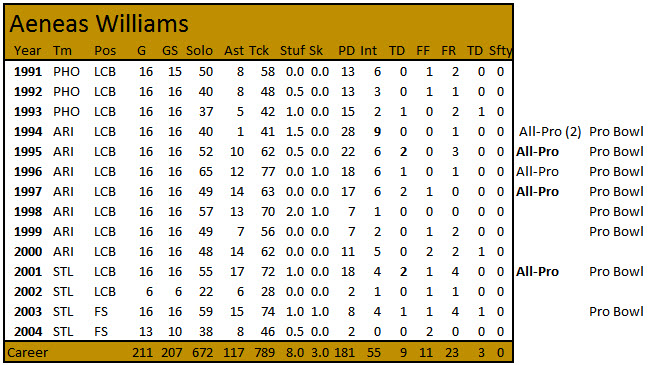 Aeneas Williams was the textbook corner. Solid in all areas, run forces, zone coverage, man coverage, instincts, ball skills. He also missed his first game in his twelfth season. He scored twelve defensive touchdowns and led the NFL in interceptions in 1994. 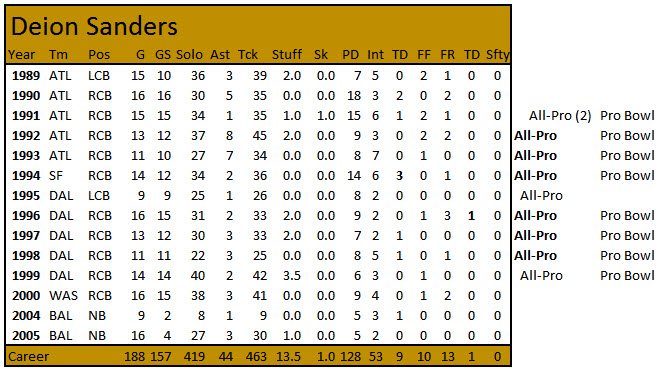 Everyone knows about Deion Sanders and many consider him the G.O.A.T. though some Night Train Lane fans would have something to say about that. He excelled in man coverage and it is not myth that he could take one receiver all over the field and essentially take that player out of the game.

He was an eight-time All-Pro (seven of them consensus) and an eight-time Pro Bowler and the AP NFL Defensive Player of the Year in 1994. The only knock on him was his tackling, he wasn't, as he says, "paid to run tackle" and that he spent too much time playing baseball. Anywhere from 2 to 4 or even five times a season you had to start your nickel back because Sanders was on a baseball diamond for the first month of the football season. 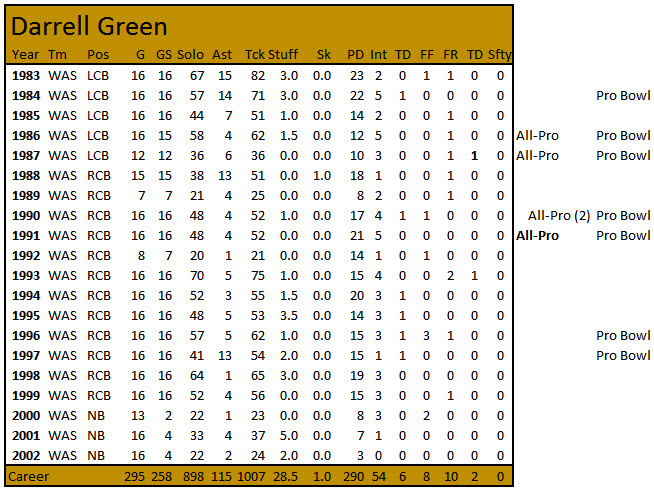 The NFL's fastest man in the 1980s was Darrell Green. He was a fine cornerback as well being named All-pro three times (once consensus) and voted to seven Pro Bowls in his 20 seasons. He had over 1000 tackles and just under 300 passes defensed. He was a part of three Super Bowl winning teams (1982, 1987 and 1991) and was a starter at cornerback for an incredible 17 seasons. 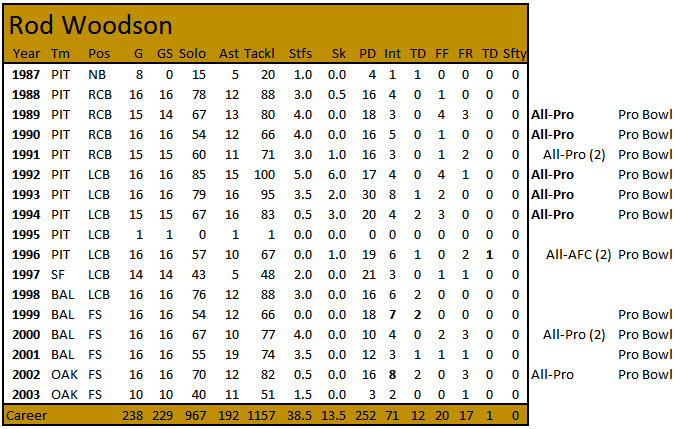 A six-time All-Pro (five consensus) and an 11-time Pro Bowler Rod Woodson did all you could on a football field. He was a good blitzer and was excellent in man coverage and zone coverage and had great football instincts. He wasn't as fast as Darrell Green but he was likely faster than everyone else other than Green in his prime. He moved to safety at the end of his career and led the NFL in picks in 1999 and 2002 at that position. He ended his career with 71 interceptions (returning twelve for touchdowns) and 17 defensive fumble recoveries (one for a score).
Posted by John Turney at 2:10 PM