A Must Read
By John Turney 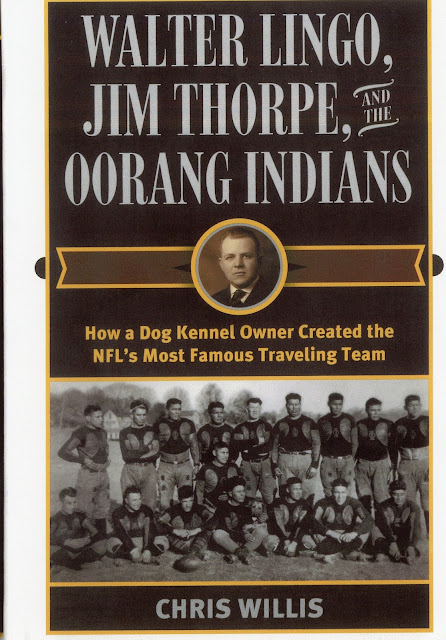 Here is a short exert from the new book Walter Lingo, Jim Thorpe and the Oorang Indians: How a Dog Kennel Owner Created the NFL’s Most Famous Traveling Team. Written by Chris Willis this new book tells the story of a unique and fascinating part of NFL history. In 1922, Walter Lingo, a dog kennel owner from tiny La Rue, Ohio (population 800) joined forces with his good friend and hunting buddy Jim Thorpe, also the country’s greatest athlete, to create the Oorang Indians. Willis recounts how Lingo used the football team, the star attraction of Thorpe, and the all-Native American football team to help advertise his kennel and sell dogs.

One of the more genius ideas of Walter Lingo when running the Oorang Indians was taking promotional photos of his squad. He hired a photographer, named Adam Bauer, from nearby Marion, Ohio to create these great images.


Adam Bauer was born on May 9, 1873, in Big Island Township in Marion (Ohio) County to Philip and Mary Bauer. The family moved to Marion when Adam was just three years old. At an early age, Adam learned to become a machinist. Later on, he attended night classes at the Y.M.C.A and studied mechanical drawing which led to his employment as a mechanical draftsman at the Marion Steam Shovel Company. But it was photography that was Bauer’s passion.
After a few years at the Marion Steam Shovel Company Bauer left in 1917 to open his own photography business. His store, called “Bauer’s Studio,” became well known in town at 126 and half South Main Street in Marion. He advertised himself as a commercial photographer- “Anything-Anywhere-Anytime.” He would go on to shoot thousands of photos in his shop and around Marion. He shot landscape, buildings, weddings, baby shots, and much more. If you want to visually see the history of Marion, Ohio today, you will see it through the camera lens of Adam Bauer. On almost every photo he took his name “Bauer” appears at the bottom, usually at the bottom right. The Marion Daily Star once wrote about Bauer:


“Mr. Bauer has shown himself the master of the details of commercial photography, and has given Marion a fine service in this respect, for Marion products go all over the world and the use of the camera with good judgment is a big help in selling them.” 16


Oorang Indians owner Walter Lingo contacted the 49-year old Bauer to see if he would come to La Rue and shoot photos of his newest promotional project- a pro football team made up of entirely Native Americans. One afternoon Bauer drove with his camera the fifteen miles to La Rue and just after practice Lingo had the whole squad stop what they’re doing to have Bauer take photos of the team and players. Bauer took a team photo with the whole team wearing their new jerseys. Then each player posed individually with their jerseys and helmet on. Some had their pictures taken without their helmet.
Lingo would use Bauer’s photos to promote his team in the newspapers of the towns they would be visiting. Throughout the 1922 season, these photos would make their way into newspapers across the country. Almost ninety years later these photos show a special team, at a special time. These photos show what the NFL was like in the first couple of years in existence.  At this time not every NFL team made the investment of shooting a series of photographs (team and individual), to help promote their team. Maybe they took a team photo, but Lingo made sure everybody had their photo taken wearing the new Oorang jerseys. Bauer would help contribute to Lingo’s promotional plan.

The book is available on Amazon.

Chris Willis is the Head of the Research Library at NFL Films and is a member of the Professional Football Researchers Association (PFRA).

He graduated from Urbana (OH) University with a B.S. in Physical Education—while playing four years on the Urbana football team as a wide receiver and then attended the Ohio State University Graduate School and earned an advanced degree in Sports History.

Willis has put his Graduate degree to tremendous use with his work at NFL Films and authoring five previous books prior to this current volume.

I highly recommend buying this book and adding it to your football library. Willis's prose is detailed and informative and paints a compelling picture of the precursor to what became the National Football League.