LOOKING BACK
By Nick Webster

Frank Cope was a star defensive tackle and a two-way player for the New York Giants in the late 1930s and early 1940s. His play earned him great accolades, he was named to the 1930s All-Decade team by the Hall of Fame despite debuting as a rookie in 1930 and he was named All-Pro as late as 1945 for his sustained greatness. But in 1943 and 1944 Cope pulled off a feat that may have never been done in the history of the game—and if he’s alone today, he’ll certainly remain there. 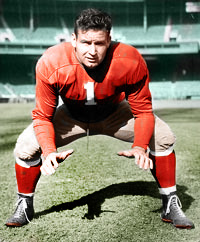 It’s October 17th, 1943, and Cope’s Giants are playing just across town against Brooklyn. George Cafego of Brooklyn drops back to punt from the 30 but Cope breaks through to block it, the ball is recovered in the end zone by Giant Charley Avadisian for a Giant touchdown.

Then, a week later the WWII creation the Phil-Pit Steagles rolled North to take on the home-standing Giants. The Steagles roster was, of course, a bit of a hodgepodge with an aging out-of-shape HOFer in Bill Hewitt trying to hang on and a young Al Wistert of Eagle fame showing his wares as a rookie. Like most teams of the era, the Steagles made use of the quick kick and had many different players, typically QB’s, punt for them in a typical season. Steagle Roy Zimmerman dropped back to punt from the Steagle 43 only to have Cope rush through and block his attempt which bounded into the arms of Giant O’Neal Adams who returned the effort for a Giant Touchdown. Then, when Jack Hinkle dropped back to Punt Cope again broke through and blocked the punt which Al Blozis recovered and returned for yet another New York Giant touchdown.

But, as the weather turned cold the Giants invaded Washington for their final tilt of the season on December 13th and this time as Cope broke through again on no other than Slingin’ Sammy Baugh; his punt was blocked.  A fourth different Giant—Steve Pritko, the happy recipient of the blocked punt in the end zone, for another Giant touchdown.

Returning the following season—the only one where he’d earn All-Pro accolades—Cope pulled it off one more time. In the first game of the season with his Giants visiting the Boston Yanks, Cope again blocked a punt, this one recovered by Giant Vic Carroll, for a Giant touchdown.

Finally, again feasting again on a WWII Frankenstein Team, this time the Cards-Steelers on October 22nd, Cope blocks another punt off the foot of Joe McCarthy. As the ball rolls into the end zone, in a near-miss, the improbable streak comes to an end. McCarthy jumps on the ball in his own end zone and alas, rather than a 6th straight Punt block for a TD, the Giants must settle for a mere Safety. 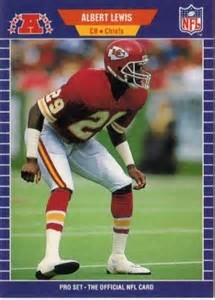 This unusual feat—a 13-game time-horizon had Cope blocking 6 Punts (4 in a single season), 5 directly resulting in Touchdowns and the 6th in a safety, can never really be duplicated in today’s NFL.

Ted Hendricks in his storied 1974 blocked 7 kicks, but this was in a 14-game season, only 3 of these blocks over the 14-game span were punts and only one resulted in a score; a safety off a Herman Weaver punt against Detroit.

Over a decade later, in 1986, in a 16-game season, the Kansas City Chiefs recognized CB extraordinaire Albert Lewis as having blocked 4 punts; but on closer inspection one was a partial block with the punt being downed past the original line-of-scrimmage. Of the 3 true punt blocks by Lewis, only one resulted in a touchdown when teammate and backfield mate Deron Cherry recovered it for a touchdown against the Steelers and Harry Newsome (renowned for having his punts blocked as it was).

Finally, in more modern times only Ed Reed has come anywhere near this feat, in 2003 in two different games Reed blocked a punt, in each case recovering his own block and in each case sailing into the end zone for six. Great accomplishments all, though none matching the performances nearly 70 years ago of the great Frank Cope.
Posted by Nick W at 12:53 PM