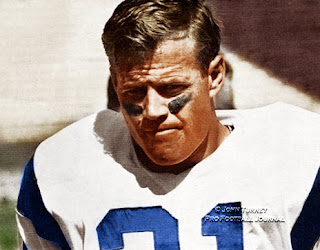 There has been more than one defensive back that began his career as a corner and later played safety while earning enshrinement in the Pro Football Hall of Fame. Today on his birthday let us take a close in-depth look at a man that should deserve the utmost consideration by the senior's committee to be enshrined. 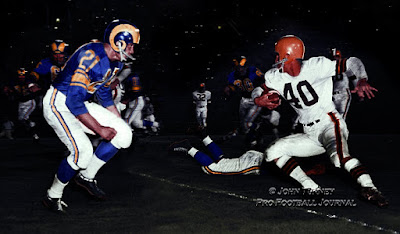 Displaying hustle, toughness, and a willingness to improve Meador started at right corner his rookie year. His second year he is moved to left corner and earns a Pro Bowl berth on a losing team; which we all know is not easy. Though he intercepts only once in 1961 he receives All-Conference recognition from the Sporting News, yet again the Rams play inconsistent, losing football. 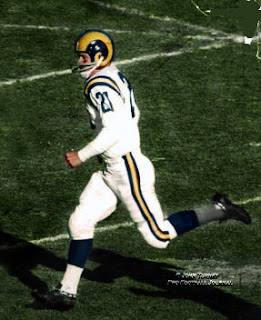 Meador though has proven he is a top notch strong-side corner, adept in man coverage, and stopping wide running plays. The bottom for the Rams occurs in 1962 as they win only once and another coaching change in Los Angeles as Bob Waterfield is out, and young inexperienced Harland Svare is in. The young talent on the Ram offense has strong moments during the years of 1963-65, yet there is no real direction. 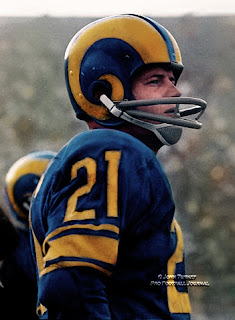 The defensive line is named the "Fearsome Foursome", and is the envy of many teams, but the linebacking corps and secondary struggles in every aspect of quality defense. Eddie Meador has been moved from left corner to right safety for the 1964 season, and again earns a Pro Bowl berth with a losing team.

The three top-flight teams in the Western Conference are lead by Vince Lombardi, Don Shula, and George Halas. Los Angeles is again hiring, and this time management gets the right man for the job in former Bears defensive coordinator George Allen. Allen takes over a team that has won just 25 of its previous 94 games. Can he change the culture, and of course improve the roster?

Allen's staff in 1966 includes four men who are in their first year with the Rams; receivers coach Howard Schnellenberger, offensive line coach Ray Prochaska, offensive coordinator Ted Marchibroda, secondary coach Tom Catlin. The holdover is defensive line coach Jack Patera. Every one of these men are not only excellent teachers—they all have success in their coaching careers. 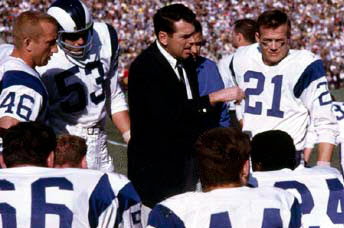 Allen, of course, is the defensive coordinator ably assisted by veteran linebacker Bill George (acquired from the Bears). Prochaska's offensive line is a work in progress; especially since they give up 54 sacks during the year. The run blocking is adequate with starting tackles Carollo and Cowan. Center Ken Iman and right guard Joe Scibelli work well in tandem during the campaign. Don Chuy begins the year at left guard; is replaced by veteran Ted Karras for a couple games, and finally, the best rookie guard in years takes over in future Hall of Famer Tom Mack. This group has a very bright future.

Billy Truax is a capable blocker at tight end and catches the ball well. The wide receivers are veteran Tommy McDonald coming off a splendid 1965 Pro Bowl year and young Jack Snow. Tommy still has excellent hands and can run every route, but he is not the deep threat he once was. Snow on the other hand still has much to learn but is faster than most corners realize and shows vast improvement over the year. There is virtually no depth at the receiving position.

Dick Bass gained over 1,000 yards in 1962, and the "scooter" knives, spins, and bounces his way to another 1,000-yard season in 1966. Jim Stiger earns his letter at halfback(also a fine punt return man), but the usual starter is Tom Moore. His season in 1966 has gone virtually unnoticed over the years, that is until now—while he is a pedestrian back with no speed or moves; he catches 60 passes. That is right; SIXTY! Offensive coordinator Ted Marchibroda is under strict orders from Coach Allen to not turn the ball over and maintain possession. The best way is with the short passing game with men who don't drop passes and running the ball well.

Roman Gabriel is on the pathway to stardom, yet his game needs refinement. He holds the ball too long, still wants to rifle the ball into coverage due to his cannon right arm, and run over defenders. He is being taught by a master in Ted Marchibroda, and Gabriel shows he can do the job for years to come. Being decisive and accurate is the key, and Roman will demonstrate these traits in the coming years.

Rosey Grier is at the end of the line at defensive right tackle, yet he still is a load to block at just under 300 lbs. Lamar Lundy is athletic and strong at right defensive end and his dominant performance in the victory over the Bears in September demonstrates he is a force to be reckoned with.

How many teams in league history can claim a better left-side duo than David Jones and Merlin Olsen? Jones has gained weight for this season and still has his moments due to his physical gifts. Thi, however, is not his best year, while Olsen has become without question the best defensive left tackle in football.

George Allen after viewing the film of the defensive disaster of 1965 made the astute trades to put savvy veteran talent in the back seven. Jack Pardee is talked out of retirement and though rusty can still play the left side linebacker position. Dan Currie spells him in some games. Myron Pottios earned Pro Bowl berths with the Steelers at middle linebacker but plays very little due to injury and the rejuvenation of "the General"—Bill George. He is in his 15th season, and has seen it all. Allen learned the Clark Shaughnessy defense in Chicago, and refined that confusing, cutting edge alignment. 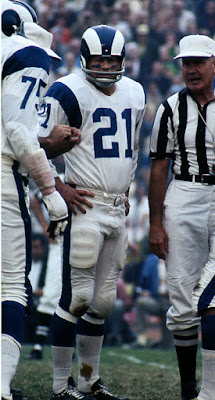 Can Bill George still play the run, pursue, blitz, and drop into coverage as injuries and age have taken a toll on him? While he does not play as he once did, he still has enough strength and moxie to be effective. No doubt the Ram defense in 1966 is called correctly. Why the Eagles traded such a fine weak side linebacker like Maxie Baughan is a mystery but boy oh boy can he play. By far the best the Rams have ever had.

Irv Cross also comes in a trade with Philadelphia and handles the right corner post with intensity and smarts. He can play man, zone, and come up and tackle. The most improved player on the Rams if not the entire league is left corner Clancy Williams. Adequate against the wide run, he has the speed and instincts to handle man coverage, and also is learning the subtle adjustments to the Allen zone concepts. Williams intercepts 8 times during the campaign. Chuck Lamson has his best season ever at left safety.

Los Angeles won four of their first five, but have now lost three in a row as they travel up the coast to Kezar on a rainy day to play the high-powered 49ers. San Francisco is in a pro left formation and traps Olsen with hard running John David Crow lugging the leather for 7 yards. The tackle is by free safety Eddie Meador as he quickly diagnoses the play, and takes John David down.

Later in the drive, it is 1st and five at the forty-nine and again the Niners are in a pro left formation. Flanker Kay McFarland looks to be open on his skinny post, but Meador cuts in front of the would-be receiver and intercepts down on one knee.

Los Angeles loses to San Francisco to fall to 4-5 (the only time George Allen was ever under .500 as a head coach), but down the stretch, the Rams demonstrate they are not the Rams of old as they win four of their last five. The offense struggles to score touchdowns, but Bruce Gossett who had kicked 15 field goals in the first 10 games, kicks 13 in the last 4 to put enough points on the board. The Marchibroda offense reaches fruition in the Giant game in the Coliseum when they set a league record for first downs in a game, but the key to Ram success is the defense—led by captain Eddie Meador.

Eddie played the entire season in this manner; a never miss take down tackler in the open field, patrolling deep zones in the Allen "mystical" coverages, and even taking the back out of the backfield man to man. Meador does it all and is rewarded with his 3rd consecutive Pro Bowl berth. During the decade of the 1960's in the Western Conference you have seven teams and as such to many it would seem much easier to earn a Pro Bowl berth in comparison to today's game with 16 teams in each conference.

A closer look at the safeties in the western conference during the '60s shows that one of the best free safeties ever resided in Green Bay. Willie Wood goes every year from 1964 through 1969. How many safeties are chosen each year? Usually three. Future Hall of Famer Yale Lary in his last year is chosen in 1964. 1965 sees Jerry Logan of the Colts chosen, and in 1966 Richie Petitibon of the Bears returns to Los Angeles after a two-year absence from the Pro Bowl. Petitibon again earns a berth in 1967, but the new kid on the block is also chosen—rookie Rick Volk of Baltimore is selected (four safeties that year).

In 1968 Wood & Meador are joined by the under appreciated Rosey Taylor of Chicago in one of his best years. Meador is voted as All-Pro in 1969 but does not go to the Pro Bowl as Minnesota's Paul Krause; another future Hall of Famer is joined by Wood and Volk.

Meador earned All Decade honors, and led a Ram secondary that ranked at or near the top in the key defensive passer rating from 1966 through 1969. The loss in Minnesota in December of 1969 is a dark day in Ram history, yet Eddie played a terrific game, and even intercepted to foil one Viking drive.

His last year of 1970 the Los Angeles Rams are in contention for a Wild Card berth till the last day of the season, but the victory over the Giants is for naught. How much value do we put on statistics in evaluating a players career? 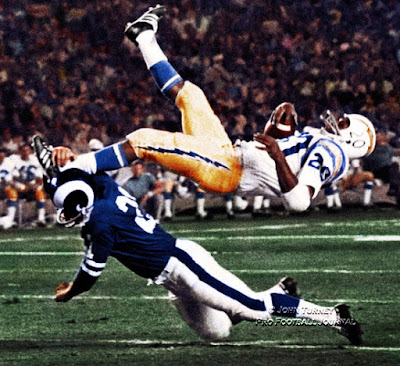 Eddie Meador is still the Ram record holder for interceptions in a career. Los Angeles never lost a game when Eddie returned an interception for a touchdown. He held for kicks and put points on the scoreboard as he threw and ran for touchdowns from this formation. Sure-handed Meador even returned punts in 1967 & 1968. When you study film there is no doubt this man is deserving of every consideration from the senior's committee. The following offer stands—I will put the film on, and the coffee, and I make damn good coffee, and the senior's committee can come to Louisville, KY, to
watch Eddie Meador play. 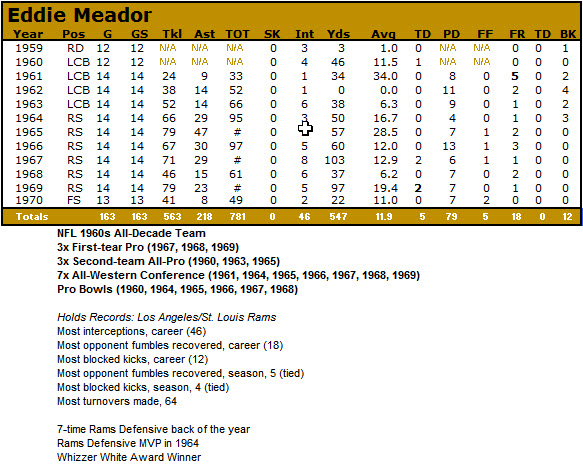