Reggie White's 1998 AP & PFWA Defensive Player of the Year Award—Did He Deserve It?

LOOKING BACK
By John Turney
From time to time we look back at Awards won by players and ask if they really had the type of season that deserved the award.

Reggie White is one of my favorite NFL players ever, he's likely the best defensive end in the history of the game, at the very worst he's the second-best. Part of his greatness was that he sustained it late into his career and in his second-to-last season (1998) he had 16 sacks (the most he'd had in a season since 1988) and four forced fumbles. On the strength of this, he was voted the AP and PFWA Defensive Player of the Year.

Late in that season, I spoke to Steve Hartman, then of XTRA Sports Radio in San Diego, about who should be the NFL Defensive Player of the Year. Hartman is as knowledgeable as anyone I know about NFL (MLB and NBA and NCAA Awards as well) awards.

"Who else would you give it to?" he asked. I didn't have a good answer but I knew I'd see about ten Packers game that season and White was getting a lot of sacks, but he wasn't making run stops in the backfield and he took a lot of plays off in my view. White ended up winning the PFWA Award and the AP Award (with 20 of the 47 votes cast) 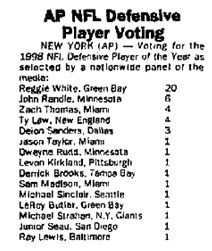 However, looking back, I still question if he was the NFL's best defender that season. The issue is that others may not have had seasons that were remarkably better.

The above chart shows the 1998 individual stats and team stats of the vote-getters along with a handful of others. As can be seen White did have 16 sacks but his 1.5 stuffs (tackles for loss in the run game as compiled by Stats, LLC.)  is quite low. His career-high was in 1994 with 8.5.

John Randle was a starting right defensive end in the base defense for the Vikings and was a 3-technique in the nickel. He had 10.5 sacks and 4.0 stuffs, neither are exceedingly high. Randle was second in the AP voting with 6. Even though he was second in the voting, it really wasn't the top season Randle ever had. Moving to defensive end on running downs, in my view, hampered him some.

Zach Thomas was the MLB for the 3rd ranked defense (1st in fewest point allowed) and totaled 137 tackles and 14 of those were stuffs (tackles of scrimmage plays behind the line of scrimmage) and he also had two pick-sixes. Ty Law led the NFL with 9 interceptions and had 27 passes defensed.
However. the top defensive back was likely Sam Madison. He was only Second-team All-Pro, he had a sack but had eight interceptions and defended 20 passes but his individual defensive passer rating was 11.3 according to Stats, LLC. Yes, 11.3, however voters simply were not aware of useful metrics like that at the time. By the way that 11.3 is the best-ever in the "metrics era".

Junior Seau played on the NFL's #1 defense and led the NFL with 15.5 stuffs, he seems like he would have been a good choice for DPOY. Michael Strahan had 15 sacks (one less than White) and 8 stuffs a pick-six, though he was not part of a top defense.

White's teammate LeRoy Butler might have been just as good a choice as White. Bryant Young, in my view, was having a Defensive MVP-type season in 1998 until he broke his leg in the twelfth game of the season. Darrell Russell of the Raiders finished with 10 sacks and 12.5 stuffs and was a consensus All-Pro and was worthy of consideration.

As a young player with the Seahawks, Michael McCrary was described as having "a motor". Surely the term had been used before but it was the first time I remember a player being tagged with that moniker repeatedly on telecasts. Now, you hear it about scores of players, but in my mind, McCrary was the original "high motor" player. In 1998 he recorded 13 stuffs and 14.5 sacks for the Ravens and made 66 solo tackles and had a total of 72 tackles. He was not a Consensus All-Pro that year but in the players poll by Sporting News, he was a First-team All-Pro (a great example of why the "AP only" approach is silly). The NFL player recognized that McCrary was more effective in run defense and still was just 1.5 sacks short of White.

It's difficult to know who had the best year, there was not J.J. Watt 2012-type year among NFL defenders in 1998 and I am aware most AP voters in 1998 would not have known where to find the "stuffs" statistics (Stats, LLC) and there was not the NFL Replay All-22 films to review, so this is not a criticism of the voters per se, it's just a review of the votes and questioning if the right player was chosen.