Titans and Nike Lay and Egg with Their New Uniforms

UNIFORMS
By John Turney
We've never been fans of the Titans uniforms. They were never well-thought-out in our view. They unveiled them in 1999 and immediately went to the Suber Bowl so that success, like the Broncos success in their 1997 uniforms locked them into team lore so it was hard to criticize them.

But, as a design they were mediocre are best. Not awful, but just average.

Now, these new ones. NOW they are awful. Why change if you are going to make them worse?

The colors are the same and they have always been good, holdovers from the Houston Oilers but navy had overtaken the light blue as the primary color since 1999 but for a short time the light blue was worn more often than the navy. Now the navy is totally dominant.

Most rediculous is the jersey font that, in Nikespeak is "meant to invoke a chiseled-in-stone Greek look and includes a notch jutting from the top right".

The helmet went from white to metallic navy, and that is fine, but it's sic of one, half dozen of the other. The mask is silver, again, fine.
A back stripe, which is inspired by the sword, also incorporates silver and begins in the rear of the helmet and tapers toward the front.

This is also the design anchor that is on the sleeves— 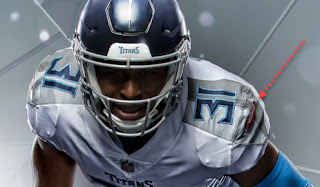 The uniforms also include angled silver striping on the pant legs, which are meant to invoke a sword’s sheath. As you can see, that just doesn't invoke anything. It's just two random gray stripes.

As usual, the players questioned, "loved them". How many times have we seen that before—

“I think they’re awesome. I’m a big fan,” left tackle Taylor Lewan said. “I love the fact that it’s not a dramatic change, but it definitely has those new flairs and everything that will definitely inspire the younger public. I think it’ll bring a little more of a facelift to this team, and I’m really excited about that.”

“This is that fierce, tough, Titan look that we all wanted,” linebacker Brian Orakpo said. “I was kind of skeptical at first with the whole new uniform change and things like that, because you got so accustomed to the old ones. But these, we’re going to love them. I know the rest of the guys are going to love them, too.”
The font is just awful, "chiseled-in-stone Greek look" or not. The colors are okay, the pants with the "sheath" are poor. Overall, a "D".