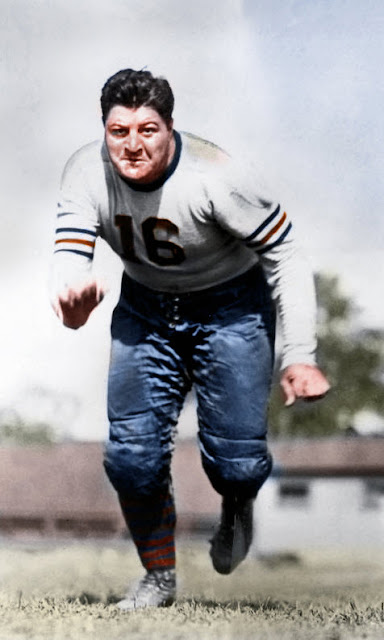 On this date (April 8th) in 1900 George Musso was born in Collinsville, Illinois. Nicknamed the “Moose” the six-foot-two, 270-pound guard-tackle played 12 seasons with the Chicago Bears. He helped the Bears win four NFL Championships (1933, 1940-1941, 1943), earned several All-Pro honors, (at two different positions, tackle-guard), and was inducted into the Pro Football Hall of Fame in 1982.

I was fortunate enough to interview George Musso at his home in Edwardsville, Illinois on April 6, 1999, when he was 88 years old- the interview was two days before his 89th birthday. Despite his advanced age Musso talked for nearly two hours about his life and career in football. It was a wonderful experience listening to one of the NFL's early pioneers talk about his love for football. This post will focus on a few of his answers about playing against future political leaders.
One of the more fascinating tidbits about Mr. Musso is that he has the distinction of playing against two future U. S. Presidents. Musso played his college ball at small Milliken College, located in Decatur, Illinois, where he was a star linemen and team captain on the football team. In 1929 Milliken squared off against Eureka College on a rare Friday night football match-up. That night the rather massive Musso lined up against a puny guard from Eureka named Ronald Reagan. When I asked Musso about playing against a future President of the United States he said:

“He played left guard and I was right tackle. Of course, we played right in front of one another. He weighed about 165 pounds, I was weighing about 235, 240 at that time. He was supposed to be handling me, of course, he couldn’t do it.

To begin with, because I was just too much weight, too strong for him. I pushed him back. In fact we beat them 42-7 or something like that. He was quick. He was a good ball player, but he was no comparison with the size. I could push him whatever way I wanted to push him.

But he was a good ball player, that’s all I can tell you about that.” 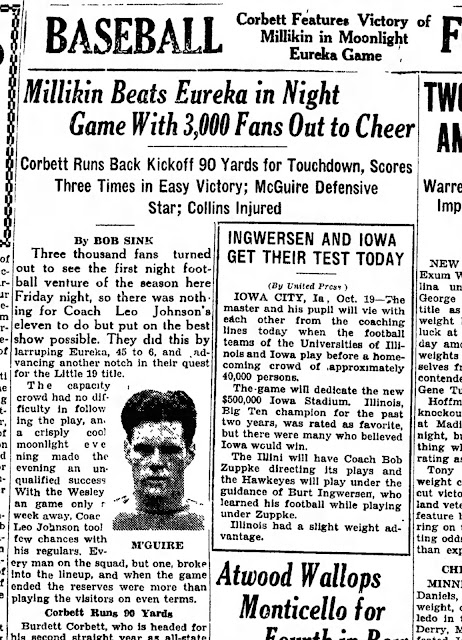 Millikin actually defeated Eureka 45-6 in front of 3,000 fans at their home stadium. As a matter of fact, Musso scored a touchdown in the first quarter when Eureka (backed up near their own goal line) tried a punt that was blocked, in which Musso fell on the ball in the end zone for a score.

Most players can’t say that they played against a future President of the United States. But Musso can. Not only that, he can say that he played against two.
Five years after his encounter with Ronald Reagan, the every opportunistic Musso played in the 1934 College All-Star Game at Soldier’s Field in Chicago. In that game, Musso lined up against Michigan All-American center Gerald Ford.

“I played against another fella that became President. Ford. He was a center on the All-Star team. Of course, we played a five-man front and I played right in front of him. He was pretty rugged. He was pretty tough. Trying to move him out of there. But he was a good ballplayer.”
Musso passed away on September 5, 2000, at the age of 90.


I will always remember my interview with the great George Musso in 1999- the man who played football against two future Presidents of the United States. Happy Birthday “Moose.” 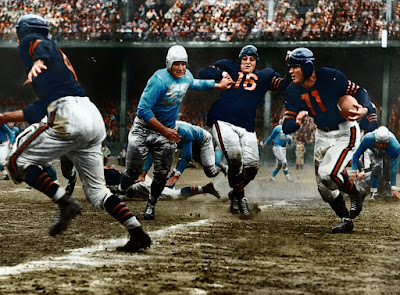