Part of covering esoteric NFL subjects in the aesthetics of logos and uniforms and facemasks and shoes and various sundries.

This week the Rams changed colors and logos. As we've outlined the colors were met positively but the primary logo was met with incredible resistance.
The secondary logo (the Ram head) has been received okay but hilariously Rams fans with computer and designing skills have been blowing away the Nike "world-class" designers that supposedly came up with what is being called the "Ram skull" with lifeless eyes.
After raising $2 million for charity Rams COO Kevin Demoff plans to read the Top 10 Mean Tweets about the new logos in the near future—which is fine. He likely won't read the Top 10 Positive Tweets because there likely are not that many.

What he should read are the constructive criticism-filled Tweets or the ones from fans who are just plain disappointed. After 2½ years of build-up and many trolling Tweets from Demoff there was great anticipation and by any objective standard, the Rams and Nike failed to deliver.


The Los Angeles media has barely touched the gravity of the situation (the New York Times, at the time of this post, has more coverage of this story than the Los Angeles Times), unlike the 1991 situation in San Francisco when the 49ers released this logo and we going to put it on the helmets.
Pre-Internet, fans called in, wrote letters, called radio shows and voiced their displeasure. The Bay Are media ran polls and cover the situation very well, not taking sides, but giving their readers a fair reading of the situation, unlike what we've so far seen from the Southland media. And the 49ers brain trust listened and reverted to the old logo. 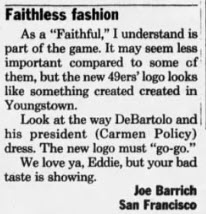 That won't happen here. The Rams are dug in. The process is finished. Though the uniforms are yet to be unveiled they are set, done. The helmet will have the broken Rams horn on it—count on it. And Rams fans have already expressed how much they'd dislike that. 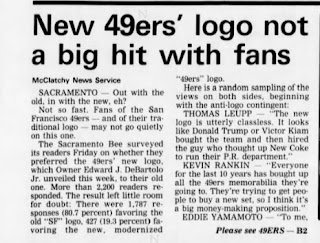 However, the Rams fans will have to just get on board, unlike the 49ers fans. For one, the NFL has rules in place about changed and the NFL Creative people have signed off.

So, sorry Rams fans. It's done. The petition at Change.org is D.O.A. No amount of e-mails, Tweets, phone calls can make a difference here. It should be noted that the rams fans ought to be commended for mustering enough energy to complain in the middle of a serious life-or-death national crisis where hope in anything is a good thing. If these were normal times the outrage would be far greater than it is now you can bet on that.

Your legitimate complaints will be characterized by Rams brass as coming from malcontents—you will be painted as the same as those who sent in "Mean" Tweets. It's simply a way to shut off the conversation, to marginalize real beefs and conflate them with over-the-top verbiage. It's a political trick that corporations use to "change the conversation".

Uniform/logo complaints will be mocked, the "what does it really matter" tact will come it, "it's all about winning and we've brought a winner to LA". Yes, McVay and Snead and Demoff have done that. But's it's a straw man. A pro sports team can win and please the fans with a good logo and uniform AND win. In fact, winning is hard. Uniform and logo design is easy by comparison.

And you can do both just as one can walk and chew gum at the same time (to throw a non-sequitur back at those kinds of silly retorts).

So, even with Eric Dickerson's criticisms of the logo or anyone else's, this is over. But make no mistake this is the biggest logo PR disaster since the 1991 49er logo change. What Demoff never fully understood with his trolls and when he got questions on chat boards over the years ("can't do a chat without a uniform question" smugness) is that Rams fans LOVE their helmets. They LOVE their uniforms. Many became Rams as young boys and girls solely because of the uniforms. It wasn't the city or the name. It was "the HORN".

Sorry. There won't be a "New Coke and Coke Classic" moment here. 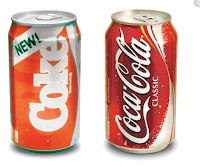 On the bright side, the Rams may be the first team in history when the illegal, bootleg merchandise outsells the official swag because this fan-based design knock-off stuff is already being marketed (purportedly anyway)— 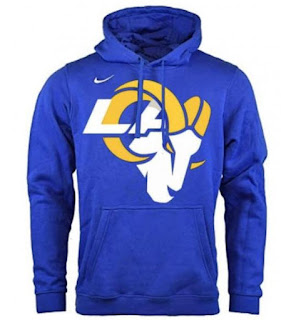