By TJ Troup
A cool rainy day here in Louisville, and time for me to attempt to write about one of the truly great leaders and winners in the history of pro football—Mr. Don Shula.

Before going any further want to address an error from my last story. JHoltgym has been very supportive in his comments about my stories over the last few years, and want to thank him for the correction concerning the Western Conference race in 1965.

Since he is a Colts fan; I am sitting here at my desk with my Dr. Pepper handy, and wearing my vintage "horseshoe" Colts sweatshirt. Where to begin? Will not write about every game from 1951 through 1995; yet I am gonna try and take you all down a memorable road of achievement that this one of a kind man.

Shula, when he joined the defending champion Browns in 1951, could not have envisioned the twists & turns on his career pathway. The loss to the 49ers to start the campaign sets up the second leg of the west coast trip for Cleveland.

Shula records his first career interception in the resounding victory over the Rams in the Coliseum. The Bears are in the thick of one of the best divisional races ever in '51, and travel to Cleveland to take on the Browns in late November.

Many reasons to detail this game; the record-tying performance of Dub Jones against a Bear defense that co-ordinator Clark Shaughnessy decided to change for this game (very foolish). Picture young Don watching from the sideline as the Bear defenders were out of position over and over in this key game.

Mental notes for a young man who just might go into coaching at the close of his playing career. Shula does intercept in this game, but earlier he had intercepted and weaved his way 94 yards to score....except that the Browns had committed another penalty (one of many that day). Ending the year in the Coliseum in the championship rematch between the Rams and Browns was one dandy game. An aspect that is never mentioned is that Los Angeles went with six defensive backs at times in the game ("dime"). Shula learns there is a place for out of the box thinking in this game that has had many men who refuse to adjust in the area of strategy in a key game. 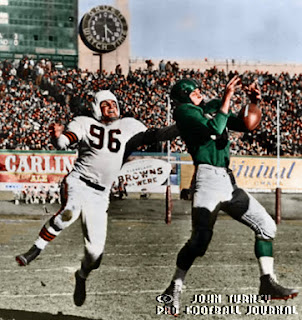 Shula returns to the Cleveland roster late in 1952 after serving our country and plays very well on special teams for Paul Brown. Over the years as a head coach in both Baltimore and Miami Shula's teams always played disciplined in this most important aspect. The loss to Detroit in the title game had folks on Lake Erie wondering what had happened to their beloved Browns in title games? Late March of '53 and Shula will not have to worry about who would be Cleveland's opponent in the next championship game, since he would no longer be a Brown.

The trade between Baltimore and Cleveland remains one of those that truly would be titled BLOCKBUSTER. Ten men for five, yet looking back no doubt Paul Brown knew he needed two quality lineman (he got them in McCormack and Colo), and felt he really did not give up that much though 10 men at least would help fill out the Colt roster. 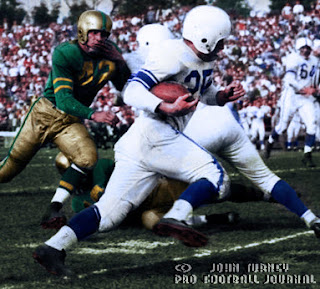 Keith Molesworth was just not cut out to be an NFL head coach as starting right corner Don Shula (now wearing jersey #25) learned. More importantly though Don observed players being assigned a position that they just should not be playing. Case in point; Marchetti at left offensive tackle instead of left defensive end. Weeb Ewbank is going to strengthen the Colt roster over time, and with his background under Paul Brown; teach the players valuable techniques. Rather than quote my book "The Birth of the Modern 4-3 Defense" with my evaluations of Shula—let's just say he was consistent and tenacious for four years.

Don is at right corner on a Saturday night in early October of '54 for a game against the Giants. On the other sideline are offensive coordinator Vince Lombardi, and defensive coordinator Tom Landry; no one, and I mean no one could envision the future games of these tremendous coaches battling each other in key and sometimes championship games. 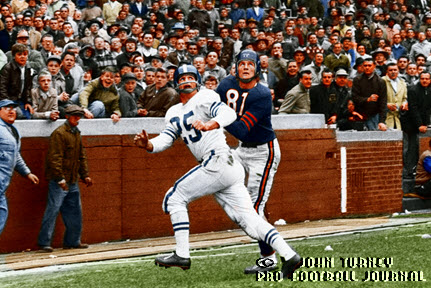 Don ranks among the league leaders in interceptions in '55 until his jaw is broken in a game against the Rams. Shula returns in '56 as the Baltimore roster has had an influx of young talent, and gains two key free agents in Johnny Unitas and Eugene Lipscomb.

Though the team played well at times during '56 the victory over Washington to end the season saved Weeb's job; but not Shula. He is cut in August of '57, but finds employment with the Redskins after right corner Gary Lowe is torched on opening day against Pittsburgh. Shula will later coach Lowe to success in Detroit at a position he should have been playing (left safety).

The Redskins lead Baltimore in the 4th quarter in November of '57, but the man in the high blacks truly believes he can take his team the length of the field and score to win the game. Don Shula saw first hand what Unitas could do with the game on the line a year before he became famous for late-game finishes. 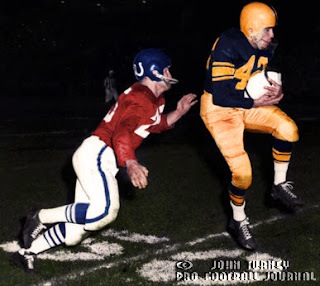 Did anyone think that someday Shula would actually coach Johnny Hightops? Shula begins his NFL coaching career in Detroit, and on October 1st of 1961, the Lions are hosting the spread formation (wing/slot) 49ers. Shula as a young defensive co-ordinator received a painful lesson that day in the 49-0 whitewash delivered by San Francisco.

Playing for San Francisco was Monte Clark. Neither man could have realized the success they would have together a decade later in Miami. Shula's three years were very successful in the sense of winning, and earning a trip to Miami for the Playoff bowl, but not near as successful as any coach would want since the Lombardi Packers played for the title. Baltimore needs a revitalization, and Don Shula is granted the opportunity to begin the rebuild and do it the way he sees fit.

Discipline, toughness, technique, and the unquenchable belief in winning must be brought out in his players. It has been stated many times many places that Shula was younger than some of his players, and he was not as talented as a player as they were and are.

Colt players like Lenny Moore have a rebirth, while marginal talents like Tom Matte not only exceed expectations, they reach stardom. His first draft in '63 has a handful of outstanding young players, and he wins right away.

The Coastal Division has two of the best teams in all of football, but only one can earn a playoff berth. The Rams record against the rest of the league from 67-69 was 30-4-2, while the Colts are 28-5-3.

The other six games you ask? The games against each other that had play-off implications? Shula betters Allen 3-2-1. The fact that one of these teams might get a Playoff bowl bid instead of a chance for the Silver Trophy helped change the league with the merger in 1970 and the wild card berth.

We all know about Joe's guarantee, yet how come no one ever mentions that the starting right corner for Shula; Lenny Lyles does not make the Colts roster in '69. Shula painfully watched a gifted speedy athlete get beat time and again by George Sauer in a game Don believed he should not have lost.

Though his time in Baltimore was memorable; he is going to take the underachieving Dolphins to a level none of them believed could ever happen. Yes, practice was long, hard, and demanding. More important take a look at the outstanding staff Shula put together in Miami. Former teammates, quality teachers, and men who understood loyalty.

The trade for Warfield, and the draft of two young quality corners in Foley and Johnson are the final pieces to the defensive puzzle. Yet for a moment want to discuss the free safety position. Shula as a player started in a 5-3-3 defense in Cleveland, and then a 5-2-4 in Baltimore, before the evolution to the 4-3-4.

The right or free safety must be the glue to hold the secondary together. Shula had seen very different styles in men who played this position from Rechichar in Baltimore to Lary in Detroit, and of course, some men who just did not measure up to helping to stop NFL quality passing attacks.

The Colts from the last days of Weeb through the first four years of Shula saw right (free) safeties struggle—and thus lose their job. Until Rick Volk. Watching film of him you can see why he was a Shula favorite to the point that the Colts under Shula began to evolve to a new zone coverage that did not rotate only to one side or the other (know as cloud or sky), but to a double zone (now known everywhere as Cover 2).

Though rudimentary in the late '60's Don Shula with help from Chuck Doll saw merit in this new way of defending the pass. Dick Anderson maximized his ability at strong safety, and Shula brought in free-spirited tough-minded and extremely athletic Jake Scott to play right or free safety.

Miami in the early 70's were know as the "ZONE MASTERS" as detailed in Tom Bennett's terrific book. No one had seen the passing game and the evolution of defending the pass like Don Shula. So many memorable games during his early days in Miami.

Again, much has been written about Shula adapting to the offensive talent he had on offense. From the crunching running game of the early '70s to the days of Marino. There are so many more games that could be mentioned here but will end with three.

September 30th, 1990 against Chuck Noll and the Steelers. Having both played for Paul Brown, having played against each other in 1956, and so many classic games between the Dolphins and Steelers are having coached together in Baltimore. The second is the week before on September 23rd, 1990 when Miami was able to score only three points against the future Super Bowl Champion Giants.

Who would have thought that Bill Belichick at that time would go on to have the tremendous success in his coaching career, and on that September afternoon in a sense the torch was being passed. The word memorable has synonyms like unforgettable, catchy, haunting, and indelible. Don Shula's career fits with all of these words, yet I was not focused on any of those words on December 15th, 1991 when I was at the "Murph" watching the Chargers upset the Dolphins. I was focused on watching a coaching legend in the twilight of his career try and take his team to the play-off one last time. RIP Don Shula, all coaches should hope to give to this game of passion what you did. Dedication, cutting edge strategy, and the will to compete each and every week.
Posted by TJ Troup at 3:58 PM