Marcus Peters—Moving at a Record-Setting Pace

PERSPECTIVE
By John Turney
Marcus Peters has played for three teams in five years but in that time he's left quite the statistical mark. He has long been known as a zone corner, one who likes to play facing the ball a "cluer" if you will, waiting back and then anticipating the arrival of the ball and breaking up the pass or picking it off outright.

With the Chiefs and then with the Ravens he did that well, with the Rams, perhaps not so much. Last season, after his arrival in Baltimore, Ravens coach John Harbaugh said, "He’s really accommodated himself to playing the style of defense that we want to play in the back end. The way we play our techniques and our coverages, the way we relate to routes in both man and zone coverages, he’s really smart. He picks it up just like that." 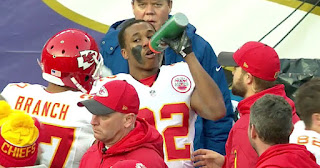 All that yardage and pick-sixes have added up. In terms of interceptions per 16 games Peters is averaged 5.6 which is second to Ed Reed (5.9) among recent players—the NFL's All-time leader, Paul Krause averaged 5.7 per 16 games for a quick comparison. Reed and Krause, of course, were both safeties. As a corner, Peters is picking off passes at a rate not seen for a couple of generations. 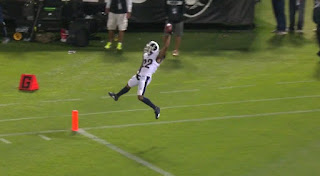 Then look at the return yardage. He's tied for newly elected Hall of Famer safety Bobby Dillon in yards per 16 games (the same as yards per game). Dillon is the All-time leader in picks per game (per 16 games, however you want to look at it).

Peters is also first All-time in yards per return among players who have played 75 games and have 20 or more picks. And throw in pick-sixes. He's first in the history of the game in that as well, edging Aqib Talib, Dick Harris, and Janoris Jenkins as the only four averaging one or more per 16 games.

Here is the chart— 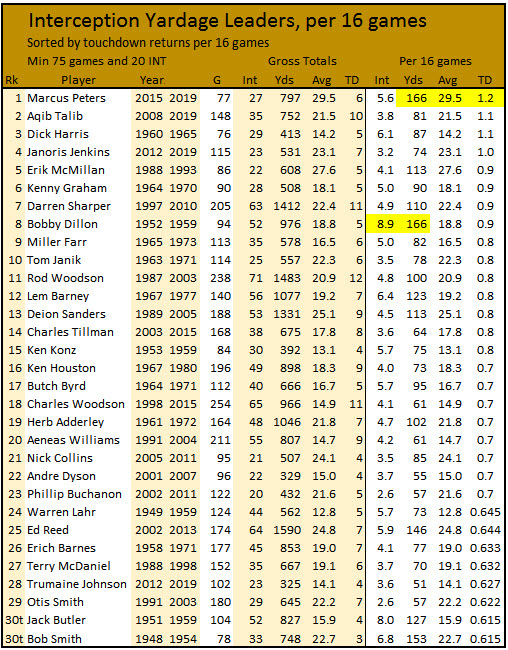 Additionally, it's useful to compare what Peters has done versus his peers since entering the league five seasons ago. He's got two more pick-sixes than anyone, 444 yards than anyone and nine more interceptions than anyone. Impressive—
Posted by John Turney at 10:33 AM