Did Karl Mecklenburg Play "All Seven Positions of the Front Seven"? 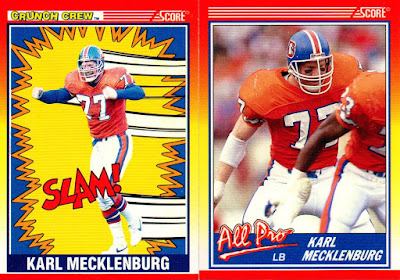 The answer is no. He did not play seven positions in the front seven.

The correct answer is he played more like 14 (or perhaps one more) spots because 3-4 defenses and 4-3 defenses, especially in that era are different enough to consider the defensive ends and 'backers as different positions and the Broncos played the 3-4 early in his career and later he played in a 4-3 and all along they used the nickel defense, which has alignments of the 4-3 defense for the defensive line. 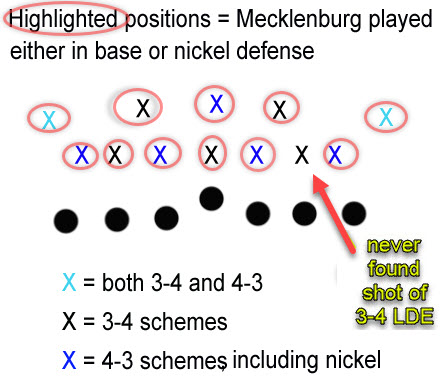 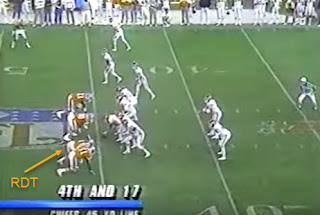 RDE in 4-3 (13)
LDE in 3-4 (14)
Obviously, in football, there are caveats to everything. When Mecklenburg played the defensive line, usually it was in nickel (or dime). He was not generally a base lineman so there is some gimmickry here. For all intents and purposes, he was an inside linebacker in base and a defensive end in nickel.

Much of the left- and right- designations are really strong and weak so the offense dictates where Mecklenburg would be based on where they lined their tight end, or where the three-receiver side would be. So, again, there is some serendipity going on as well.

But, still, The "Snow Goose" or "Albino Rhino" did play everywhere along the front but he only places we cannot show is a 3-4 left defensive end, a 4-3 left defensive end, and as far as we know he never played outside linebacker in a 4-3 defense, just the middle or 'Mike' spot. Not the Will or Sam.

Also, some suggest the "seven positions" or 14-15 whatever it ends up being is enough for a Hall of Fame pass. We disagree. If he's to get into the Hall of Fame, it must be on how effective he was as a base linebacker and as a lineman in nickel—like everyone else.

The versatility is a "nugget" if you will, an "intangible" and it's a positive one, but it, alone, is a small part of his story. He just spent too little time at some of those positions to matter to his career as a whole.

He should be judged on how good a player he was, not on how versatile he was. The versatility should only matter to the extent it improved his effectiveness. To us, it's simply not a stand-alone thing.

For other players who, for example, may have played both safety positions equally and also were a nickel in slot and linebacker in nickel at times and that was part of the "calling card" if you will . . . then fine, if they spent enough time at each spot to matter, then sure.

In the future, there could be plenty of such players up for the Hall of Fame given how some defensive backs are playing so many positions, safety, linebacker, and slot. But again, it should only matter then if they spend significant time at each. Not if it's a once-in-a-while thing.

But in the meantime, he should be celebrated as one of the most versatile players ever as a separate achievement and honor because even with the caveats and stipulations it was a unique and worthy accomplishment.