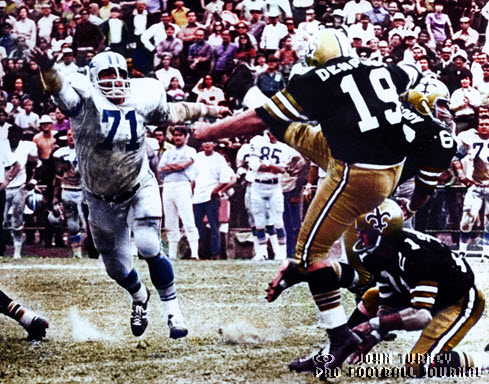 COVID-19 struck the NFL world last night when Tom Dempsey, former kicker of the Saints, Eagles, Rams, Oilers, and Bills succumbed to complications from the virus. He was 73. He had been in poor health for years battling dementia as well. According to NOLA.com he was living at Lambeth House retirement home in New Orleans and is one of fifteen patients there to die from the coronavirus.

In the NFL's first sixty years he and Jan Stenerud were the only reap 'deep threats' on field goals (each making 12) but Dempsey was more accurate (31% versus 21% for Stenerud).

Amazingly, it should be noted, that Prater broke Dempsey's record by one yard. When Dempsey set the record in 1970 he broke the existing record (held by Bert Rechichar) by seven yards.

Dempsey, who was born without toes on his right foot and without fingers on his right hand, was able to kick with a specially fitted shoe. Said Fred Dryer, a teammate of Dempsey with the Rams in 1975-76.  "I remember the sound when shoe met ball—THUD, and the ball just took off frozen in mid-air before it began to spin, kind of like a knuckleball".

The shoe led to the "Tom Dempsey rule" so-called by Jim Campbell, in a Pro Football Researchers Association article in 1999.  It read, ". . . (Dempsey's_ kicking shoe (on display in Canton, OH) resembled the proverbial blunt instrument. It had an unyielding, hard plate on the front that was bigger than the kicking surface of any other kicker's shoe. . . .The powers-that-were passed a rule in 1977 that said, “a shoe on an artificial limb must have a kicking surface that conforms to that of a normal kicking shoe.” Dempsey’s limb was not artificial, it just wasn't like anyone else’s kicking in the NFL -- but the rule applied."
Nov. 9, 1975, Coliseum

The shoe could also be dangerous in 1975, in a game at the Los Angeles Coliseum, 49ers safety Ralph McGill, attempting to block a kick, ran into that shoe and was knocked unconscious. Jack Youngblood recalls Cliff Harris also getting kicked in the head, but that he was not knocked out as McGill was.

Last April, Pro Football Journal listed Dempsey as one of the best kickers ever (39th) noting his beg leg led to a log of touchbacks early in his career and "He could be accurate (led the NFL in kicking percentage in 1971) and in 1975 he hit 80.8 percent, but he missed a lot of short kicks and PATs (career PAT percentage is 89.2%, stunningly low)".

In addition, Dempsey was a gamer, even with his disability he'd try and get downfield on kickoffs to be the safety man (as all kickers are) to prevent long returns—which once got him into trouble. In 1975 when Dallas was preparing to play the Rams in the NFC Championship Game Cowboys coach (who handled the special teams) Mike Ditka was incensed that Dempsey would try and make a tackle so he ordered rookie special teams ace Thomas Henderson to 'take him out' if he tries to run down there like he's going to make a tackle'. Which Henderson did. And Dempsey got up fighting mad. Henderson simply believed he did what he was told to do.

Henderson, in his book Out of Control, wrote, "Next stop was the Los Angeles Rams in the National Football Conference Championship game in L.A., and here’s where I found out that Mike Ditka didn’t have a heart. I knew he was a wildman, a maniac, but I didn’t know until then just how cold he could be."

Henderson continued, "The Rams had a kicker named Tom Dempsey. He was born with a withered arm and a right foot that doesn’t go much beyond his ankle . . . with a potbelly and he pissed Ditka off. In the special teams meeting, Ditka ran films of him and said, “I want you to watch this guy, Henderson.”

'He never said so in the meetings, but all week the coach would take me aside privately and say, 'I don’t want this fucking guy over the ball. I don’t want this guy coming down the field acting like he’s going to make a tackle. I want you to knock this fucker down. I want you to knock him out. The guy has one arm and one leg but he shouldn’t be on the goddamn football field if he doesn’t want to get hit.'

"When the game began we won the toss and elected to receive the ball. They lined up to kick off and Ditka put me right in the middle of the field. I was exactly ten yards from, Dempsey.

"Dempsey held up his good arm to start his teammates. He took his five steps, planted, kicked, and before he could raised his head I stuck my helmet right into his chin. He went down

“Hey, you fucking Henderson,” he yelled after me. “You fucking asshole. You’re a big man, aren't you.”  Made me feel bad. I was only doing what I was told to do I but I felt bad about it."

"Coach Ditka congratulated me after the game. “See that, that little fucker,” he said. “He wasn’t jumping on any piles today!”.

Yes, even with a disability, Dempsey would do in his job in coverage and would take the abuse afforded the job. As Jack Youngblood has stated, "Tom was one of the boys" which is a high compliment for a kicker in Youngblood's worldview.
Dempsey was January 12, 1947, in Milwaukee, Wisconsin, and played college football at Palomar College.